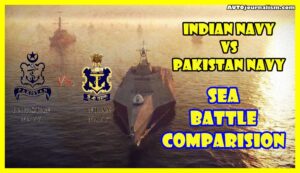 In this article, we will give you Full info About the Comparison Between the Indian Navy and Pakistan Navy plus Let’s get started by comparing the current and prospective key battleships of both India and Pakistan in this Article.

The navy, often known as the sea force, is a branch of a country’s armed forces that is primarily responsible for naval and amphibious combat as well as related responsibilities. Surface ships, amphibious ships, submarines, and seaborne aircraft, as well as ancillary support, communications, training, and other disciplines, are all part of it. The Navy is an important aspect of every country’s defense. The Pakistan Navy and the Indian Navy have had numerous encounters. But what are their capabilities, what weapons do they have, and how many people do they have in each force? Let us not spend any time and compare the naval forces of India and Pakistan in detail. Keep in mind that this is merely a comparison of the assets that both navies possess; we are not promoting a confrontation or making any assumptions about the war in any way.

This comparison is limited to naval forces, namely the Pakistan Navy and the Indian Navy.

Land and air weapons are not the same as sea weapons. The following is a detailed list of the weapons that both countries have.

Supercarriers are the world’s largest warships, designed for offensive power projection over great distances. They can deploy over 70 combat aircraft from numerous runways for both blue water control and attacks on enemy ground objectives. The United States is the only country that uses these.

These are huge battleships capable of deploying fixed-wing aircraft with a conventional takeoff. Naval strike groups rely on them as a force multiplier because of their ability to deploy aircraft at sea. Many ideas are centred on coastal defence or offensive power projection.

Helicopter carriers are often smaller than other types of aircraft. A number of critical systems, such as arresting gear for deploying conventional fixed-wing aircraft, are missing from these vessels. Only rotary-wing aircraft and, in the case of STOVL carriers, specialized fighters with vertical landing capability can be accommodated. This is a low-cost method of deploying airplanes at sea.

Long-range warships that are large, swift, and highly armed, geared for blue ocean operations and power projection. Air defense, anti-surface, anti-submarine, or a mix of these functions are possible. The lethal water defenders are these ships.

There are currently no “Destroyers” in the Pakistan Navy’s inventory.

The Indian Navy has 11 destroyers.

Frigates are medium-sized warships that are generally employed to protect bigger assets like destroyers and carriers. A less expensive way to field highly equipped surface battleships than destroyers.

Small warships of less than 2,500 tonnes serve as a complement to larger frigates and destroyers. Because of their narrow range, Corvettes are limited on the defensive front.

Nuclear or conventionally powered attack submarines are available. Built with survivability in mind, and capable of confronting enemy surface warships.

Read more: The Pakistan Navy Is The Epitome Of Pakistan’s Smart Power

The most powerful submarine class, carrying nuclear-armed ballistic missiles to give nuclear nations with a second-stage strategic deterrent on the seas.

These navy vessels are meant to assist combatant ships and other naval activities. Although they may have some limited combat capability, mainly for self-defense, these are not principal combatants.

The figures come from the book “Military Watch.”

List of All US Weapons Left Behind In Afghanistan (Taliban)