MG Gloster entered into Indian market in 2020. The car got some attention and it competes with the likes of Toyota Fortuner, Ford Endeavour, Mahindra Alturas G4 and the Volkswagen Tiguan All Space. We haven’t seen much accident of the SUV to see the crashes of the MG Gloster much. But now, an accident occurred in Jabalpur, Madhya Pradesh (MP). The accident happened as the driver lost his control over the car while taking a sharp turn at 70 kmph. So read the full article on MG Gloster crash to know more about it.

As the report says, the SUV hit a poll in the roadside. There were 4 passenger in the car. Although the front airbags were deployed and the A-Pillar of the car is intact, front passengers got some major injuries. It may be because they were not wearing a seat belt. Rear 2 passengers are safe with some minor injuries. But all are safe. 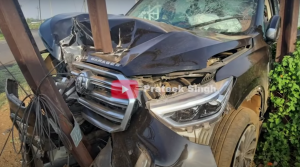 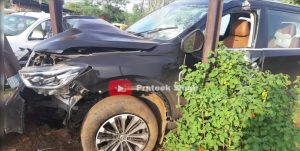 The crash test of MG Gloster is yet to happen. But the Chinese model of MG Gloster, the Maxus D90 got 5 stars in ANCAP (Asian NCAP).

The prices mentioned are On-Road Bangalore.