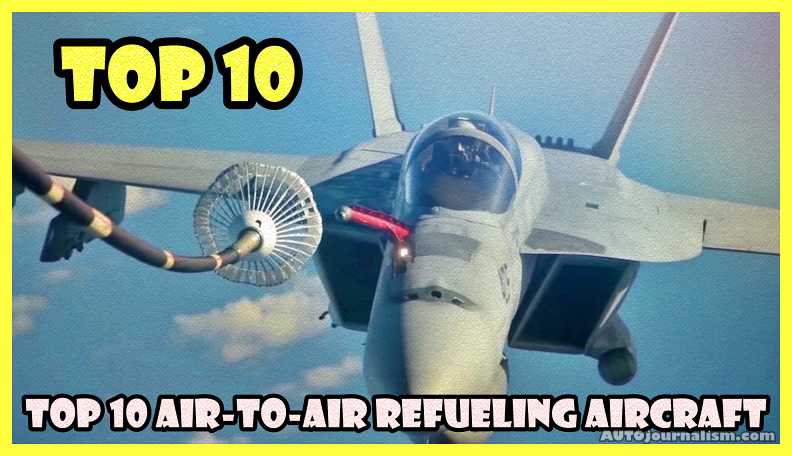 Here is the list of Top 10 Air-to-Air Refueling Aircraft in the world,⭐⭐⭐⭐⭐ Tanker aircraft is also known as aerial refueling aircraft, and it is the Strategic Air the air-fuel replenishing from a plane carrying fuel to a receiving aircraft while it is in the air, and it allows faster fuel transfer. Aerial refueling is primarily used in military operations as an airborne station capable of extending the flight time of fighter jets and reconnaissance aircraft, allowing them to stay on the job for longer. On this list, we have the world’s largest and most effective refueling aircraft by fuel payload capacity. Let’s take a look at the top 10 tanker aircraft below.

The process of transferring aviation fuel from one military aircraft (the tanker) to another (the receiver) during flight is known as aerial refueling, also known as air refueling, in-flight refueling (IFR), air-to-air refueling (AAR), and tanking. The probe-and-drogue refueling method is easier to adapt to existing aircraft, whereas the flying boom refueling system allows faster fuel transfer but requires a dedicated boom operator station.

The process permits the receiving aircraft to stay in the air for longer periods of time, extending its range or loiter time on station. Only crew tiredness and engineering reasons such as engine oil consumption can limit the range of a series of air refuelings. Air refueling allows a takeoff with a larger payload, such as weapons, goods, or passengers, because the receiving aircraft may be topped up with extra fuel while in the air. The maximum takeoff weight is maintained by carrying less fuel and topping up once airborne. Top 10 Refueling Aircraft Tankers

Alternatively, a shorter take-off roll can be achieved by taking off with a lower weight and then refueling once in the air. On long-distance flights of more than 3,000 nautical miles, aerial refueling has also been proposed as a way to cut fuel use (5,600 km; 3,500 mi). For long-haul flights, potential fuel savings of 35–40 percent have been calculated (including the fuel used during the tanker missions).

It is a tactical military transport and aerial refueling aircraft designed by the Brazilian Air Force. It first flew in February 2015 and has a range of roughly 3,700 miles. It can carry up to 50 1,500 pounds of fuel weight and cargo and personnel at the same time.

In April 2009, the Brazilian Air Force (FAB) awarded Embraer (Empresa Brasileira de Aeronáutica), one of the world’s major aircraft manufacturers, a $1.3 billion development order for its EMBRAER KC 390 medium-weight military transport jet. The new high-wing aircraft took to the air for the first time in February 2015 and is projected to be operational by the end of 2019. With the introduction of the EMBRAER KC 390, competition in the 20T air transport category has heated up.

The EMBRAER KC 390 will have features that are in line with the new National Defense Strategy and will suit the needs of the FAB. The new aircraft will replace the FAB’s current Lockheed Martin C-130E/H and EMBRAER KC 390 aircraft.

This aircraft is a tanker aircraft created by Lockheed Martin that has a range of 4920 miles and can carry a fuel load of 61,364 pounds of gasoline. Its cargo transportation, medical evacuation, and simultaneous refueling of two aircraft at a rate of 1135 liters per minute are among its capabilities.

Lockheed Martin developed the KC-130J TANKER aerial refueling aircraft for refueling tactical aircraft and helicopters. The aircraft can also be utilized for quick refueling on the ground. In Iraq, the US Marine Corps’ KC-130 fleet collected more than 20,000 hours of flight time. The kc-130 tanker builds on the combat-proven c-130 Hercules tanker technology. When equipped with extra fuel tanks, the kc-130 can carry a total of 27,834 kilograms (61,364 pounds).

It has the capacity to refuel two aircraft at the same time at a rate of 1,356 liters per minute. The aircraft’s multi-mission capabilities enable it to perform a wide range of missions, including freight delivery, medical evacuation, search-and-rescue, and airborne attack.

an Airbus-based airliner with a flight range of up to 5,523 miles and a cargo capacity of 92,594 pounds capable of aerial refueling and transport With a delivery rate of 1500 gallons per minute, an Airbus tanker can refuel two airplanes at the same time.

the Airbus A310 MRTT is a multi-role tanker transport aircraft based on the Airbus a310 jet airliner. It serves as both a refueling and transport aircraft. The German Air Force and the Royal Canadian Air Force are presently operating the aircraft. The Airbus A310 MRTT is a two-point tanker with a 42,000-kilogram standard fuel payload capacity. 90 pounds 2594 pounds An underwing hose and drug refueling pods installed on the underwing pylons transport the fuel. Each pod can provide up to 1500 liters of fuel every minute.

For refueling missions, the Airbus A310 MRTT has operators stationed behind the cockpit and a mission computer subsystem. The MRTT can be customized to transport passengers and freight as well as medical evacuation missions.

Another Airbus plane on this list is the Airbus A400m, which is the only tanker capable of refueling the whole range of probe-equipped military aircraft. It has a payload range of up to 2050 miles, a fuel capacity of 113,000 pounds, and a refueling transfer speed of up to 2,250 liters per minute.

The A400m is a multipurpose rural transport and tanker aircraft that provides cost-effective aerial refueling capabilities to Armed Forces throughout the world. It is the only tanker that can refuel all probe-equipped military aircraft. Within two hours, the a400m cargo aircraft may be changed to a two-point tanker configuration.

a moment The aircraft can refuel helicopters at low speeds and low altitudes, as well as refuel fighters like the Eurofighter f-18 Hornet and Rafale, as well as large aircraft like the C 295 and C-130 Hercules, at higher speeds and altitudes. It can also be fitted with a detachable refueling probe to collect gasoline from a 400 M buddy refueling station.

This is a modern tanker capable of air-to-air refueling, freight or passenger transport, and medical evacuation operations. It can fly up to 7,000 miles with a fuel carrying capacity of up to 60,000 pounds and a gasoline delivery speed of up to 2,270 liters per minute.

The US Air Force’s KC-767 tanker transport aircraft is a high-performance version of the Boeing 767-200ER twin-aisle jetliner configured for fully integrated tanker operations. It has boom and receptacle refueling, hose and drogue refueling, or both refueling options.

The commercial 767 first flew in 1982, and moreover, 880 planes have been delivered since then. The tanker’s cabin can be equipped as a freighter, convertible (passenger or freighter), or combi for passenger transport (passenger and freighter).

It is an aerial refueling aircraft designed in the early 1980s that can give fuel to up to three aircraft at once and has two compartments fuel tanks. It can go up to 3,000 miles and has a maximum fuel capacity of 188,980 pounds of fuel.

the nato reporting name for the Aleutian il-78 The ILLYUSHIN-78 MIDAS is an aerial refueling aircraft derived from the ILLYUSHIN-76 MD military transport aircraft. The ILLYUSHIN-78 can refuel three separate aircraft at any time of day or night. The aircraft’s fuselage and wing tanks can hold 85,720 kilograms (128,584 pounds) of fuel.

It may be converted into a transport aircraft in the field to transport troops, cargo, and equipment. Two gasoline tanks are located in the cargo compartment. To transfer gasoline from fuselage tanks and wing boxes, the aircraft uses three you paws unitary refueling pods. The Indian Air Force operates an il 78 MKI version of the Aleutian Isle 78, which is equipped with Israeli fuel transfer equipment.

It was one of the first prime aerial refueling aircraft in service in 1957, with a flight range of around 1500 miles and a fuel load of two hundred thousand pounds. During the Vietnam War, the kc-135 fleet performed eight hundred and thirteen thousand aerial refueling for combat aircraft.

The Boeing kc-135 Stratotanker is a prime aerial refueling aircraft in service with the United States Air Force. The first kc-135 was delivered to the Castle Air Force Base in June 1957, and the kc-135 fleet performed 800 13,000 aerial refueling for combat aircraft during the Vietnam conflict. The kc-135 can carry a fuel load of 97,800 pounds.

It primarily distributes gasoline via the flying boom, but it also uses a shuttlecock-shaped drug to refuel probe planes. A boom operator in the back of the plane keeps an eye on aerial refueling missions. The kc-135’s service life is extended because of redesigned wings and more powerful and fuel-efficient engines. The re-engined kc-135r and kc-135t tankers have a 50% higher fuel offload capability and a 25% higher fuel efficiency than the original kc-135a aircraft.

The BOEING KC-767 TANKER is a next-generation multi-role tanker aircraft with an incredible fuel transfer speed of up to 4,542 liters per minute. It is still in the development phase, thus the flight range has yet to be determined. This tanker can carry up to 212,300 pounds of fuel at any given time.

The kc-46 is a next-generation multi-role tanker aircraft based on the Boeing 767 commercial aircraft that was selected by the US Air Force in February 2011 to replace the obsolete kc-135 Stratotanker. The kc-46 will be able to refuel all fixed-wing aircraft thanks to its advanced fly-by-wire boom based on the proven kc-10 boom, as well as state-of-the-art center line and wing-mounted hose and

The Airbus A330 multi-role tanker transport is a new generation aerial refueling aircraft based on the Airbus A320 center jet. It can carry up to 300 people or 45 tons of cargo and can hold 111 tons 245 thousand pounds of fuel. It is in service with the Royal Australian Air Force and the UAE Air Force. The Royal Air Force and the Royal Saudi Air Force are both Royal Air Forces. The aircraft’s innovative Airbus military aerial refueling boom system guarantees the fastest possible fuel transfer and permits refueling of both the receptacle-equipped f-16 Fighting Falcon F-35a Lightning 2 and the A330 MRTT.

The ARVs are the most capable new generation flight-proven boom available, with a fuel flow rate of up to 36 hundred kilograms per minute (1,200 gallons per minute). The air-to-air refueling systems are controlled from an advanced fuel operator console installed in the cockpit, and day and night refueling is supported by a video monitoring system.

A computerized fly-by-wire system is used by the boom operator to control the refueling mission. The kc-10 can provide 1,786 liters per minute utilizing a hose and drog refueling system and can transfer fuel at a maximum rate of 4,000 180 liters per minute with its aerial refueling boom. To improve safety during aerial refueling operations, the aircraft is equipped with automatic load relief and autonomous disconnect systems.