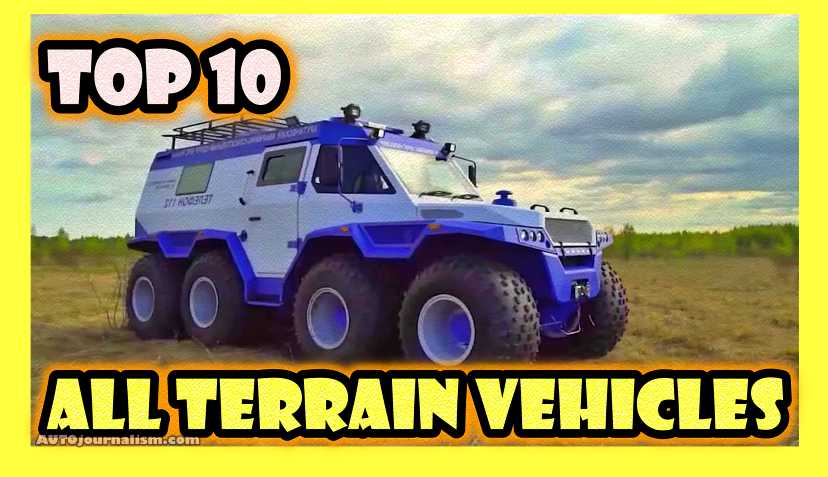 Here is the list of Top 10 All Terrain Vehicles, There are a lot of great ATVs on the market these days, but these ten finest all-terrain vehicles in the globe put the competition to shame in a big way. Before we get started, make sure to share this article with your friends. and This page should be saved to your favorites. As a result, you’ll always be up to date on all of our most recent and fascinating stuff.

Polaris is on the loose. The Polaris rampage is a ridiculously powerful all-terrain all-season global reach platform that can handle whatever you or mother nature throws at it. It’s even being used extensively by the Canadian military to support their missions in and around the North Pole. The rampage’s heating and cooling systems are also both top-notch, and with a top speed of over 60 miles per hour, it’s perfectly suited to tackle whatever you or mother nature throw at it.

This tracked system can easily navigate even the most difficult terrain and weather conditions, and it can even propel itself through deep water, which is a huge improvement over almost every other tracked vehicle currently in production. It’s still a prototype, but that doesn’t make it any less impressive. This does imply that it is not now accessible on the commercial market, and technical specifications are still scarce, so we can’t go into great detail, but if you join the Canadian Armed Forces, you might be lucky enough to try one out for yourself.

The Gibbs Terraquad is built on the phenomenally successful Quadski platform, but it far outperforms its predecessor. It comes equipped with everything you could possibly need when out in the wild, including side-by-side seating, roof bars, and a rear-loading deck. This rear-wheel-drive quad is also amphibious, allowing it to go where other utility terrain vehicles can’t. The terra quad’s top speed on land is 50 mph, and on water, it’s 45 mph, with a transition time of fewer than five seconds.

It also takes less than three seconds to plane, allowing you to reach top speed incredibly quickly while in the water. It has a gasoline capacity of 15 gallons (56 liters) and a curb weight of 690 kg. Independent coil springs and high Drollet dampers give superb suspension, and rack and pinion steering is used. Trail and marine navigation lights will illuminate your path in all weather conditions.

The Tinger Track ATV is a versatile amphibious ATV that was built for both civilian and military use. It is currently in use all over the world, with Tinker gaining a lot of attention recently. There are a few different variants to select from, each well suited for a number of testing. Tinker also made a point of kitting out their vehicles with a slew of cool extras, like as their kickass amphibious trailer, which can climb steep slopes, speed through swamps without slowing down, and cross deep rivers with ease.

These tracked ATVs are touted as being ideal for hunting, fishing, and even laid-back leisure trips into the unknown. They can also be used as a snowmobile, tractor, quad bike, or swamp buggy, and are completely amphibious. Its Fibby escape ability is kicked into high gear with the help of a hook and electric winch setup, which vastly improves its already impressive capabilities. 40 degree uphill climbs are a piece of cake for the Tingler track, and it can also operate well on 45-degree downhill slopes as well.

The Geo Rescue is incredibly versatile. Although it is advertised as a transportation medical support and fire rescue vehicle, one look at it reveals that it can do much more. Its large wheels and excellent weight distribution allow it to outperform its competitors in all weather conditions and terrain types. It can carry up to 11 people without feeling crowded and weighs 3.2 tonnes. It can also carry water pumps.

Pneumatic pillows on the wheels allow it to float across water or power through deep snow. A collapsible top luggage rack and a medical stretch with side door access are also included. A snowplow system Tarah trip and GPS are among the other accessories. All of this is powered by a capable engine that produces hundreds of braking horsepower. The military edition also includes extra electromagnetic and water protection, as well as plenty of other adjustable options if needed.

The Sherp ATV appears to be incredibly capable, and it is. It can climb up or down hills with grades of 35 degrees and is also amphibious. Its top speed on the water is only three point seven miles per hour, but its top speed on land makes up for that shortcoming, as the sure pay-tv can travel at speeds of twenty four and a half miles per hour when it isn’t traveling through deep water. It has a clearance of 23 inches and a carrying capacity of 2200 4 pounds.

Its maximum power output is roughly 443 horsepower, but it doesn’t take away from it being a powerful ATV that can handle practically any terrain without skipping a beat. It’s easy and dependable, and repairs can be done quickly. Each of its huge tires holds 800 liters, for a total amount of 3200 kg. This keeps the Sherp ATV afloat in strong waves, while the Hermetic body prevents water from entering its interior compartment. The sharp can even stay afloat with no tire pressure, which is rather astounding.

Both six and eight-wheel versions are available. The Argo Frontier 750 Scout 8×8 is a powerful all-terrain vehicle, with a 26 horsepower v-twin EFI fan-cooled engine that provides plenty of power in even the most challenging situations. The front-tier 750 Scout has remarkable mobility thanks to the original transmission, which works like a skid steer.

It has a high-performance four-cycle twin-cylinder engine with low vibration that is designed for clean, consistent power in all seasons. The paddle design of the offset rims with low-pressure 24-inch tires allows for outstanding amphibious propulsion in deep water while maintaining optimal grip to bring you across the most difficult off-road terrain.

This amphibious vehicle stands tall and strong, with tank controls and an asymmetric front end. It’s simply a beefed-up sharp, with an extra axle thrown in for good measure. Berlocq means “hauler” in Russian, and that’s precisely what this all-terrain vehicle excels at. It isn’t the most attractive vehicle on the market, but that’s not the point.

The point with the Burlack being designed to be the ultimate powerhouse ATV, some notable accessories include a built-in shower in the kitchen, allowing for a surprising amount of comfort during long-distance treks through rough terrain. Additionally, all of the Burlack systems are easy to access, maintain, and repair, minimizing the amount of time you have to spend outside, which comes in handy when the temperature drops well below freezing B vs 10

It’s a dual-body and fibia vehicle that gives entire operational assistance in situations where other vehicles can’t. Developed by Swedish company B EI Systems, it may be employed commercially as well as perfectly suited for the most rigorous military activities. Despite its size, it’s extremely maneuverable.

even with all of that weight added to it, it can hold up to 14 passengers and has a maximum payload of 8,000 pounds. The Beowulf can travel at speeds of up to 65 km/h, is designed to be used 24 hours a day if necessary, and can be maintained at a low cost to the owner. It’s also completely capable of traveling from land to water and back again without difficulty.

the ultra-modern Despite our usage of the term “urban,” the Shaman 8 Wheel ATV is more of an urban assault vehicle than an ATV and can readily tackle any terrain. Optional extras include a hydraulic front and electric rear winch, propeller screw steps, and roof rack. It also comes with tinted windows, an app to restart the engine, heated mirrors with electric heaters, and a removable tow bar with an electrical connection. The shaman aids has a 4,800-pound curb weight and a six-speed manual transmission.

Tucker Sno-Cat is the ideal winter weather ATV, with four different tracks that allow it to perform things that many tracked vehicles can only dream of, such as spinning on a dime and tackling most grades of slopes like they’re nothing more than teeny little speed bumps. The snowcat is a massive 2-ton vehicle that was utilized during the first land trek of Antarctica and performed admirably.

It can operate in the harshest of environments, able to work in negative 70-degree temperatures, and withstand 40-knot winds without slowing down, covering 22 miles per day even in deep snow. The newest variant of the snowcat is even more capable than its predecessors, with Tucker claiming that no road is too steep and no snow is too deep for its amazing ATV, which is one of the world’s top ten all-terrain vehicles.