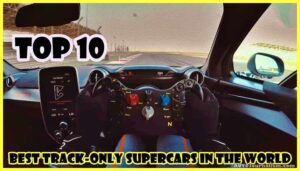 Here are the list of Top 10 Best track-only Supercars in the World, ⭐⭐⭐⭐⭐ All decent supercars must-have performance credentials, so it’s no surprise that manufacturers have long had the bright notion to create examples exclusively focused on eye-watering speed and spine-warping handling, with no compromises made for the sake of passing a roadworthiness test. These automobiles are not only unable to travel to the store, but they are also unable to race, as they are created beyond the bounds of any rule book.

1.3 million dollars was the original price. The BT-62 is a mid-engine track car built by the British-Australian company Brabham Automotive. With its performance-optimized body and aggressive aerodynamic package, the car is powered by a mid-mounted 5.4 liter naturally aspirated v8 engine that produces 700 horsepower and 492 pound-feet of torque. Power is sent to the rear wheels via a six-speed Hollinger sequential-shift racing transmission.

The BT-62 produces over 2645 pounds of downforce and will be limited to only 70 units to commemorate the company’s founder, Sir Jack Brabham, starting his racing career in Australia in 1948.

1.65 million dollars was the original price. The senna GTR’s awe-inspiring performance comes from its McLaren m840tr 4-liter twin-turbocharged v8 engine, which produces 814 horsepower and 590 pound-feet of torque, which is only 25 horsepower more than the road-going senna but still makes it the most powerful McLaren combustion engine ever at 155 mph.

The GT-R generates over 2204 pounds of aerodynamic downforce, but only 75 will be built, and they’ve all been assigned to owners. From McLaren Special Operations, each unit has its own distinct characteristics.

2.5 million dollars was the original price. The AMR pro package, which made its premiere at the 2017 Goodwood Festival of Speed, makes the Vulcan more aerodynamic and faster on the racetrack.

The AMR pro is a normal Vulcan with a naturally aspirated v12 engine that produces 820 horsepower and 575 pound-feet of torque and is installed on an aluminum alloy chassis with a carbon-fiber body. The automobile accelerates from 0 to 62 mph in just 2.8 seconds and goes on to reach a top speed of more than 200 mph.

Any of the 24 existing Aston martin Vulcan cars can be fitted with the AMR pro package.

2.6 million dollars was the original price. The Essenza scv12 was created for exclusive track use and has aerodynamics influenced by racing prototypes. It is driven by a variant of Lamborghini’s long-serving 6.5-liter v12 engine that produces 820 horsepower, making it the company’s most powerful naturally aspirated engine. The Essenza scv12’s manufacture will be limited to only 40 units. Each automobile will be housed in its own hangar with dedicated services and webcams. so that owners can use a different app to monitor their vehicle 24 hours a day Lamborghini would be in charge of the cars’ upkeep and transportation to any of the FIA class 1 tracks around the world.

2.7 million dollars was the original price. During the Ferrari 70th anniversary celebrations, the fxx k evo was introduced at the Ferrari finale on Mondial 2017 at Stazione Leopolda in Florence. The car employs the same hybrid drivetrain as the fxx-k model.

It has a naturally aspirated 6.3-liter V12 engine with 860 horsepower and a 190-horsepower electric motor. Total output is 1050 horsepower and 730 pound-feet of torque, with downforces up 23% over the normal fx xk and up 75% over the road-going la Ferrari.

According to Pagani, it has the same Mercedes-Benz Amg six-liter v12 engine that produces 802 horsepower and 538 pound-feet of torque. The automobile can accelerate from 0 to 60 mph in just 2.7 seconds and reach a top speed of 215 mph.

3.1 million dollars was the original price. Only 30 Huarya r models will be produced. The track car is the appropriate heir to the iconic Zonda r. The Huarya r’s 6-liter naturally aspirated v12 Mercedes-sourced engine produces 850 horsepower and 553 pound-feet of torque.

These figures are supplied to the rear wheels via a six-speed non-synchronized dog-ring sequential gearbox. Thanks to the active rear aero flaps, downforce reaches 2205 pounds at 199 miles per hour. The Huarya r, according to Pagani, sounds like a Formula One car from the past, with a redline of 9000 rpm.

original price 3.36 million dollars, McLaren raised up the GTR moniker to p1 as a reference to the McLaren f1 GTR that won the 24 hours of le man’s race in 1995. The p1 GTR concept car debuted in August 2014 at the Pebble Beach Concours d’Elegance, and the production model was shown at the 2015 Geneva Motor Show. Only 58 examples of the p1 GTR were produced.

The p1 gtr is powered by a lightweight electric motor and a 3.8 liter dual turbocharged v8 engine that delivers 986 horsepower, 83 more than the street-legal p1. The automobile accelerates from 0 to 60 miles per hour in just 2.4 seconds and tops out at 217 miles per hour.

original price 4.3 million dollars, named after the three-time Formula One champion who won the 1978 Swedish Grand Prix in a Brabham bt-46b fan car driven by Murray. The t-50s Nikki Lada is powered by a unique 3.9 liter Cosworth v12 naturally aspirated engine that produces 725 horsepower and revs to a mind-boggling 12100 rpm.

The car is 282 pounds lighter than the road-going t-50 and has 835 horsepower per tonne, which is equivalent to a Le Man’s race car. Gordon Murray is only producing 25 t5 os when 100 standard t-50s are completed.

4.7 million dollars was the original price. The bullet’s name comes from Abella, which literally means “racing car” in French. The bullet’s official horsepower will be 1578 instead of 1825 horses because Bugatti raided the production car using 98 octane gasoline, which can be purchased at roadside gas pumps, instead of 110 octane racing fuel.

Top 10 Best Bombers in the World