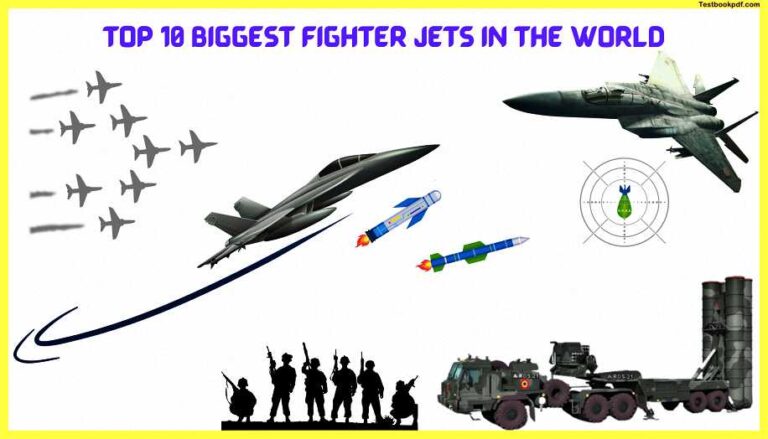 Today in this article we will give the list of the Top 10 Biggest Fighter Jets in the world, if we were to raid the world’s largest fighter jet how would we do it sure appearances are everything to certain people more massive the better right here’s a list of the top 10 biggest fighter planes in the world.

List of All Top 10 Biggest Fighter Jets in the world

Boeing F/A-18E/F Super Hornet is a twin-engine aircraft called the Super Hornet has seats for two crew members in the 18f and one crew member in the 18e its maximum takeoff weight is 66,000 pounds and it has a length of 60.1 feet and a wingspan of 44.8 feet.

Lockheed Martin F-22 Raptor is a single crew engine F-22 Raptor is about 62 feet long its wingspan is 44.6 feet its fuel capacity is 26 000 pounds and its maximum takeoff weight is 83,500 pounds it is equipped with an air-to-air missile system air-to-ground missile and small diameter bombs in addition to a 20-millimeter rotating cannon that can contain 480 rounds.

the Grumman F-14 Tomcat is an American-made to-engined aircraft that can accommodate two crew members its length is 62.9 feet its wingspan is 64.1 feet its fuel capacity is 16,200 pounds its maximum takeover weight is 74,350 pounds.

McDonnell Douglas F-15E Strike Eagle is the twin engines Strike Eagle that has room for two crew members its length is 63.9 feet and its maximum takeoff weight is 81,000 pounds Strike Eagle is capable of exceeding 1,600 miles per hour the Gatling Cannon and up to 500 rounds of ammo are installed on the Strike Eagle and it also carries a range of bombs countermeasures and air-to-surface missiles.

the twin-engine Russian fighter Sukhoi Su-57 felon can carry one crewman its length is 65.11 feet its wingspan is 46.3 feet it’s fuel capacity is 22,700 pounds and its maximum takeoff weight is 77,162 pounds its gun oughta Cannon much air-to-air air to surface anti-ship and anti-radiation missiles are all carried by the felon.

the Chengdu J-20 also known as The Mighty dragon is measured 66.7 feet in length 42.3 feet in wingspan 81,571 pounds in maximum takeoff weight and 26 000 pounds in fuel capacity it has a Top Flight speed of 1 300 miles per hour long and short-range air-to-air missiles anti-radiation missiles and precision-guided bombs are all carried by the Chengdu J-20.

Sukhoi Su-30 Flanker-C has a room for two crew members has an overall length of 71.9 feet is equipped with a 150-round internal Auto Cannon rocket launcher air-to-air air-to-surface anti-ship and anti-radiation missiles flanker C can also use a range of Munitions such as laser-guided bombs general purpose and cluster bombs and others.

Sukhoi Su-35 Flanker-E has room for one crew member its dimensions are 71.10 feet in length and 50.2 feet in wingspan its maximum takeoff weight is 76,509 pounds and its remarkable fuel capacity is 25,400 pounds the flanker e is equipped with a 150-round internal Cannon air-to-air and air-to-surface missiles as well as a range of rockets and bombs.

The F-111 Aardvark, the first swing Wing Fighter capable of supersonic speeds and level flight is the second largest and most expensive strike aircraft in history at 73.6 feet long it is a medium range Supersonic interdictor and tactical assault aircraft that also serves as an electronic welfare platform strategic nuclear bomber and aerial Recon aircraft.

Fiddler the largest ever fighter jet was the Tu-128 twin-engine Fiddler, it has room for two crew members its wingspan is 57.6 feet its length is 98.7 feet its top takeoff weight is 96,342 pounds and it has a huge fuel capacity of 29,983 pounds when the jet is armed it can reach speeds of more than 1035 miles per hour and when it is unarmed it can reach speeds of around 1,200 miles per hour.