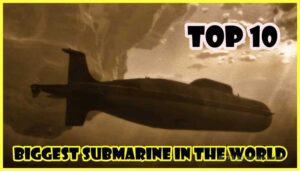 Top 10 Biggest Submarine in the World

These top ten largest and biggest submarines are listed in order of length in the area undiscovered by hostile anti-submarine ships and maritime patrol aircraft following a conflict.

10 Biggest Submarine in the World

The Akula class consists of ten submarines, nine of which are in the Russian Navy and one in the Indian Navy. Surface speed is 10 knots, submerged speed is 35 knots, and the Akula class has a maximum speed of 35 knots.

Its main machinery comprises a pressurized water nuclear reactor, a steam turbine, and two 2 000 kilowatt turbo generators, and it can carry up to 12 submarine launch cruise missiles with a range of 000 kilometers.

It also strengthens its resistance to torpedo assaults. The submarine is 111 meters long and has two emergency motors as well as a pressurized water nuclear reactor. The essential components include one shaft and two spinners. This submarine’s weaponry features 650-millimeter torpedo tubes in place of 530-millimeter torpedo tubes. 42 mines, a double sn 21 cruise missile, a double sn15 starfish anti-submarine weapon, and a double sn16 stallion

The Triomphant Class is a nuclear ballistic missile submarine that is part of the French navy. Each submarine is 138 meters long, 12.50 meters wide, and 10.6 meters deep, with pressurized water k-15 nuclear reactor and two diesel alternators.

The propulsion system consists of a turbo reduction system and sm auxiliary motors, with a top speed of 25 kilometers per hour. The submarine is equipped with 16 m45 intercontinental ballistic missiles with TN 75 tipped missiles. The armament also includes four 533 millimeter torpedo tubes and f-17 torpedoes.

Yasen Class number seven The Yasen Class is a new nuclear submarine class being built for the Russian Navy. The Yasen class is characterized by a single low magnetic steel hole that decreases magnetic signature.

The submarine weighs 13 800 tonnes underwater, has a length of 139 meters, and a beam of 15 meters. Cruise missiles are launched from submarines. anti-ship missiles with a great range and supersonic speed missiles with anti-separation capabilities The submarine’s weapon systems include torpedoes, anti-submarine rockets, and mines. The maximum submerged speed of a Yasen Class submarine is 35 knots, with a surface speed of 20 knots.

vanguard class number six With a submerged displacement of 15 900 tonnes, the vanguard class is the world’s sixth-largest submarine. The Royal Navy of the United Kingdom has a nuclear-powered ballistic missile submarine in service.

Oscar 2 class or number five ante In service with the Russian navy are four Oscar 2 submarines. The double hull of nuclear-powered submarines of the third generation is divided into ten primary compartments.

The submarine is 155 meters long and 18 meters broad, with 24 anti-ship cruise missiles and six torpedo tubes, while the 949 am submarines can carry caliber supersonic cruise missiles. The Oscar 2 class is powered by two pressurized water-cooled reactors and two steam turbines. The propulsion system enables a maximum submerged speed of 32 knots and a surface speed of 15 knots.

The Bahrain class is the world’s second-largest submarine. It is a nuclear-powered missile-carrying submarine that serves Russia’s strategic naval forces. It is 170 meters in length, has a beam of 13.5 meters, and a draught of 10 meters. An ok 650 nuclear reactor, a steam turbine, and a shaft and propeller make up its power plant.

The typhoon class is ranked first. The typhoon class submarines are the world’s largest submarine class, with a submerged displacement of more than 48 000 tonnes. They are 175 meters long, 23 meters wide, and 12 meters deep. It is powered by two nuclear water reactors, two fifty thousand horsepower steam turbines, and four 3,000 kilowatt turbo generators.

It can reach speeds of 22.2 knots at the top and 27 knots at the bottom. Because of its many pressure openings, the typhoon is broader than any other submarine. Crew members can stay on board for up to 120 days in comfort. The submarine is equipped with 20 intercontinental ballistic missiles, each with a nuclear warhead of 100 kilotons, as well as six 533mm torpedo tubes and type 53 torpedoes.