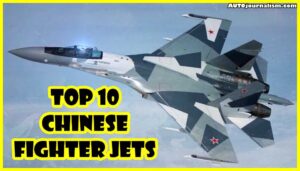 In this post we will give you info about the Top 10 Chinese Fighter Jets, So let’s start – After decades of reliance on Russian-built jets, China is modernizing its People’s Liberation Army air force with a new domestic-built fleet, aided by Russia. Whether Beijing’s air force is international or not, it is a force to be reckoned with. Following that, China began mass-producing local clones of Soviet fighter jets, which it then marketed in significant quantities around the world. China’s aircraft is remarkable in and of themselves, therefore here are the most important and newest planes in the Chinese fleet at the moment.

Despite its low worldwide sales, the Sukhoi-27 was a fighter jet produced in the latter years of the Soviet Union. China bought several for the People’s Liberation Army’s (PLA) air force. This aircraft, like the previous one, was planned to be a direct rival to those built by the United States Air Force.

The Sukhoi-27 is a multi-role air superiority fighter that can reach speeds of up to 2,500 kilometers per hour. It was developed to compete with the F-14 Tomcat.

The breakup of the Soviet Union had an impact on the production history of this fighter jet because the sd-27 variant was not mass-produced due to political ramifications. Russian imports are one of China’s most capable fighters. As of May 2020, China has 24 s-235 variants in service and is allegedly exploring acquiring more of the powerful Russian fighter.

The SU-35 is widely regarded as Russia’s greatest and most flexible air superiority fighter, combining a high-performance aerodynamic design with upgraded avionics, sophisticated targeting systems, and a large arsenal of weapons. The Sukhoi-35 is capable of reaching a top speed of 2400 km/h.

With the SU-30MKK serving as a contemporary to the f-15e strike eagle, China has purchased both this and the mk2 for use. It entered service in both the Russian air force and the Chinese air force.

The craft is now in service with the Chinese navy as well as the People’s Liberation Army Air Force, with the latter driving efforts to modernize it and maintain it viable in the future. It is a high maneuverable and speedy fighter aircraft with the capability of reaching a speed of up to Mach 2.

The Shenyang fc31 is China’s answer to the US-made f-35 in the continuing airborne arms race for 5th generation fighter jets. It is intended to compete with the United States for a piece of the fighter jet market, which the US military values highly.

As a possible competitor to the F-35, the F-31 There is evidence that Japan, South Korea, and other regional allies believe the same way, as they have increased research into fifth-generation fighters. However, according to a Wall Street Journal report from 2009, some of that progress may have come at the expense of the United States, as Chinese espionage may have allowed them to obtain secrets about the f-35.

Though the initial j11 was effectively a carbon duplicate of the sg27, the later j11b and its sub-variants incorporated a host of Chinese-made internal components in keeping with its soviet history.

The J-11 is a large, nimble fighter that can carry and deliver a huge payload. An updated j11d model with a new fly-by-wire system and a plethora of practical avionics modifications is apparently in the works.

Despite being inspired by the Su-33 fighter jet, the j-15 is a Chinese design that was first introduced in 2013 and is still in production with approximately 20 believed to have been built so far. These are classified as fourth-generation fighter jets, while the f-35 and the Chinese-made fc31 are both fifth-generation fighters.

The j-15 is considered a top-tier Chinese fighter jet, as evidenced by the fact that two j-15 fighter jets successfully landed on the aircraft carrier Liaoning in November 2012. However, the j-15 has certain problems in bad weather.

The PLAAF is stockpiling Soviet-made fighter airplanes once again. The Chengdu j7, a Chinese variant of the Soviet MIG-21 fighter jet, first flew in 1966 and is still in service despite the fact that it hasn’t been produced in years.

More than 300 j7s are thought to be operational and in varying degrees of readiness in the PLAAF and Chinese navy. Other air forces across the world have also employed the j7. Iran and Egypt continue to use them in warfare, while Myanmar and other countries train with them.

The PLAAF and the Chinese navy both operate this plane, which is manufactured in Chengdu. Previously, the Russian Siberian Aeronautical Research Institute admitted its involvement. This Russian influence may be seen in the j-10’s components.

The PLAAF isn’t the only air force that has ordered the j-10, which is powered by a Russian-made lyoka Saturn al-31fn engine. It was originally planned to have a Chinese engine, the ws-10 Tai hong, but issues with this resulted in the al-31fn being used instead. The Pakistani air force has likewise done so, with at least 40 planes being manufactured for use in the Pakistani air force.

Finally, one of the PLAAF’s newest fighter jets, the Chengdu j-20, goes to the skies. The plane is equipped with cutting-edge components like the Shenyang ws-10b engine and will compete with the F-35 and other American fighter fighters.

Other specifics, such as the sort of radar equipment utilized, have not been revealed by the Chinese government. The type of electronic systems utilized onboard, which are usually considered to be highly modern, is another military secret. The total number of jets manufactured is likewise kept secret.

Note:- The majority of viewers are from Asia and China, and I simply want to clarify that this is not my position or viewpoint.

Some people on a YouTube channel discuss these jets in the comment box + ( ctrl + c ), but I only provide you the information. Join us for more information, and if you have any problems, please let me know in the comments section, and I’ll handle the problem from the material and respond to you within an hour 🙂