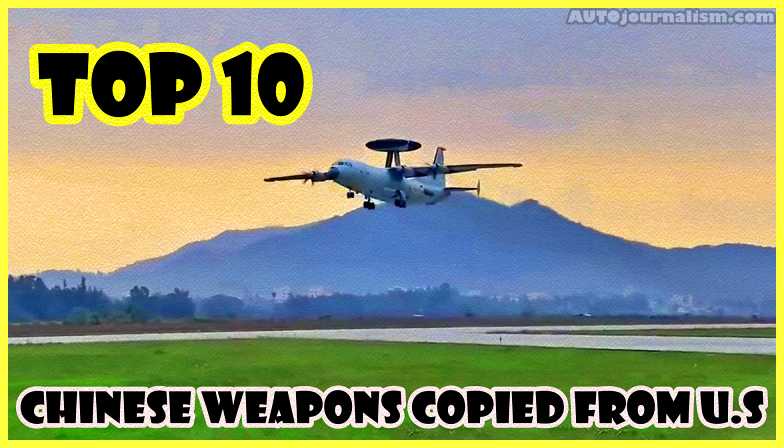 Here are the Top 10 Chinese Weapons Copied From US, As China’s military has developed, the country’s military-industrial complex has struggled to keep up with demand. China’s state-run arms industry has gathered expertise through any means required, and they regularly manufacture weapon systems that are far too similar to American designs to be a coincidence. Take a look at these ten Chinese weapons that are similar in design to those used by the United States.

The Chinese army has been using the Dongfeng EQ2050, a Chinese replica of the American Humvee, since 2007. The first American m998 vehicle was seen by Chinese military authorities in 1988, and it was initially deemed to be excessively expensive, but after the Gulf War in 1991, it became affordable.

When the humvee performed admirably, Chinese officials changed their minds, and a few civilian humvees were purchased in the United States and brought to China in the 1990s, where they were investigated and reverse-engineered, resulting in the eq 2050, which closely resembles the American humvee in form and function.

Existing photographs and sketches of China’s planned H20 stealth bomber, called a B2 copycat, for the People’s Liberation Army Air Force depict an aircraft that appears to be indistinguishable in some aspects from a USB to bomber.

Given China’s well-known and well-documented practice of copying US weapons systems, the h-20’s rounded upper fuselage, blended wing body, curved upper air inlets, and essentially no vertical structures should come as no surprise. There appears to be a substantial amount of evidence simply visible to the naked eye demonstrating china’s overt copycat maneuvers.

The WING LOONG is almost identical in size and shape to the 1.2 tonnes MQ-1 PREDATOR wing lung weighs 1.1 tonnes, has a 14-meter wingspan, and is 9 meters in length.

The wing lung bears a striking resemblance to General Atomics’ predator drone series, prompting accusations of copycatting in the Western media. However, countries such as Pakistan and several Middle Eastern countries have ordered over 100 of these drones, which are said to cost a third of the price of sophisticated US-made drones.

The CQ 5.56-millimeter assault carbine is the only CQ model known to be in official use with a legitimate armed force, having been obtained in large quantities by the Paraguayan army through deception.

The mil pol is a replica of the American m4a1 assault carbine with a telescopic stock, removable carrying handle attached on a Picatinny rail, and a 14.5-inch barrel. It was unveiled in 2006 at numerous defence expos across the world, including the mil pol.

When China’s j-31 stealth aircraft made its first full-scale public debut in 2014, observers noticed a striking resemblance between it and the f-35 joint strike fighter. The j-31 and the f-35 have nearly identical weight height and wingspan, despite the fact that the j31’s complete specs are unknown.

However, unlike the j31, the f35 features a sensor suite that provides the pilot with a better picture of the battlefield and serves as a flying data hub for sharing target tracking data.

The ch4 has been termed the Chinese counterpart of the general atomics’ USMQ-9 reaper. The China Academy of Aerodynamics of China Aerospace Science and Technology Corporation created the ch4, also known as the Caihong-4 or Rainbow 4 drone.

The only visual difference between ch4 and the general atomic’s MQ-9 reaper is that the ventral fin below the v-tail of the MQ-9 is missing on ch4.

The z20 helicopter, also known as the USS Blackhawk clone, looks a lot like the uh-60 Blackhawk series, but there are a few important differences, including as a five-bladed main rotor instead of four on the Blackhawk and a more angular tail-to-fuselage connection structure.

Apart from China’s lengthy history of copying foreign military technologies, it appears that this latest indigenous development from China was substantially inspired by foreign designs. There would be an extensive precedent for this.

The Chinese type 726a air-cushioned landing craft appears identical to the American equivalent, although it is smaller and can carry less cargo. The Chinese hovercraft can only transport 60 tonnes, which is adequate to transport a single Type 99 main battle tank fully loaded, whereas the ULCAC can carry 75 tonnes.

The new drone looks to be based on the x-47b with minor changes like as a slightly different intake but higher than the Northrop Grumman demonstration aircraft; in fact, this appears to be the sole element that actually comes from the RQ-170.

The Boeing C-17 Globemaster III has been a major workhorse for the US military since its inception in 1995, flying personnel and cargo all over the world. The y20, China’s latest gigantic warplane, looks eerily similar to the C-17. In January 2013, the y20 took to the skies for the first time.

Though they are identical in shape and form, they made their first public debut in November 2014 at the Zhuhai air show in China following an eight-year development period. Yet, because the C-17 is larger and has a larger payload, is China growing more adept at duplicating US weapon systems while also enhancing them to make them more effective and lethal? What are your thoughts on this? Please share them in the comments area below.