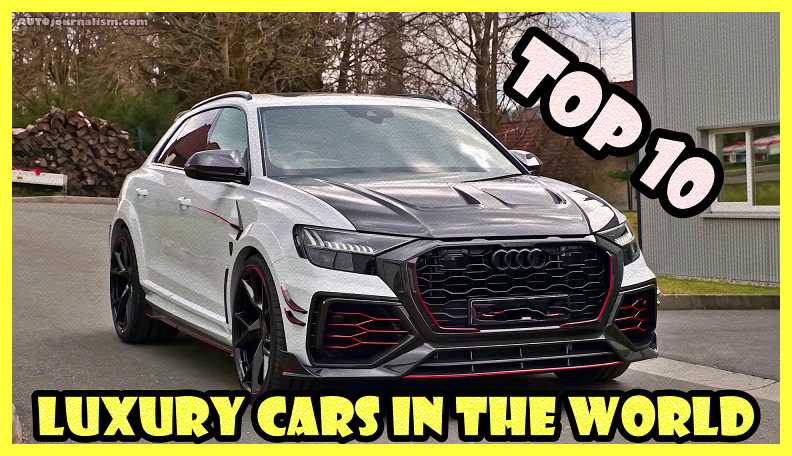 Here is the list of Top 10 Luxury Cars in the World, In this article, we will give you Full info on Luxury Cars, like Luxury Car Engine, Luxury Car Generation, Luxury Items, etc. So let’s know about them more.

If you want the world’s finest and most luxurious car, you can’t go wrong with the Rolls-Royce Phantom. The phantom is instantly recognizable thanks to its signature Rolls-Royce design language and the spirit of ecstasy mounted on the front center. The luxurious theme continues both inside and outside the car, though it portrays an essence of classic luxury that sets it apart from other vehicles in its class.

such as a starlight headliner, entirely customized interior, electronically operated doors, and 130 kg of soundproofing material fitted throughout the car, making the cabin as tranquil as it gets. The 6.75-liter v12 engine produces 570 horsepower in a smooth and refined manner, good enough to overtake anyone yet gentle enough not to cause a jerk. Overall, the phantom is the most opulent sedan ever made.

If the level of refinement in a regular S-class isn’t up to your standards, don’t fret because the Maybach edition ( maybachs ) is here to help. Everything has been altered, from the front grille to the rear bumper, to give it an extremely sumptuous makeover.

The Maybach model has an enhanced wheelbase that is even 18 cm longer than the ordinary S-class long-wheelbase model. The car is available in a two-tone color choice from Maybach. The interior is supplied with the finest quality napa leather refrigerator, a total of four displays, and massaging seats, and the job takes more than a week to complete.

The Maybach S-class can also be ordered with a twin-turbocharged v12 engine that produces over 620 horsepower. Finally, the Maybach S-class is equipped with next-generation automated driving aids that allow it to drive and park automatically under specific conditions.

The Bentley Flying Spur is the peak of British automobile luxury. With its astonishingly rapid acceleration, the top-end saloon may knock you back in your seat.

Bentley’s proprietary 6-liter w12 engine, which produces 635 horsepower and 900 pound-feet of torque, is responsible for all of the acceleration. Despite its 5.8-meter length and 2.4-ton weight, the flying spur is surprisingly good around the curves, clocking 0-60 in 3.7 seconds and reaching a top speed of 207 miles per hour.

The new flying spur isn’t just about speed and agility; it also provides all the comfort you need. The all-around leather interior, combined with ample leg and headroom and air suspension, brings out its supremely comfortable character. Overall, the new flying spur stays true to its vision of providing a luxurious experience combined with all the thrill you can desire.

The Cullinan, like any other Rolls-Royce car, sets the bar for other high-end SUVs in every way, whether it’s in terms of comfort, serenity, or overall ambiance. Both the interior and exterior follow Rolls-modern Royce’s design language, but it’s the Cullinan’s sheer grandeur that sets it apart from its siblings and rivals. The use of high-quality materials and hand-crafted elements on the interior and exterior add to the culinary’s luxury, allowing it to carve out a distinct niche in a market dominated by SUVs.

Although the Cullinan has an endless list of features, some stand out, such as a star headliner, custom dashboard inlays, and a set of two retractable picnic seats in the trunk that aren’t as comfortable as the main seats but add a touch of sophistication. The Cullinan is available in two trim levels. The Cullinan has a starting price of over 350 thousand dollars, which can be extended indefinitely by selecting for one of Rolls-many Royce’s custom alterations.

The Mercedes-Benz GLS is a beefed-up version of the Mercedes-Benz GLS, which is a very opulent full-size SUV in its own right. The Maybach GLS is the luxury division’s first-ever SUV, and it has nailed it on the first go. The exterior’s strong use of chrome accents bolsters the aggressive attitude, while the optional two-tone paint scheme demonstrates the care that went into the creation of the ultra-luxurious German SUV. The leather-draped inside is even more opulent than the exterior, and ambient lighting and ultra-plush seeds at the front and rear further enhance the cabin’s feel and mood.

If you want a truly executive experience with plenty of legroom and the first-class treatment you deserve, try the rear seats, which also include power-adjustable recliner seats and a subtle fragrance diffuser that engages your sense of smell, as well as dual 12.3-inch infotainment displays powered by Mercedes-latest Benz’s m Bux software interface that provide a crystal-clear visual experience backed up by a world-class Burmester audio system with an incredible 27 speakers.

The 2020 Bentley Mulsanne stays true to its legacy and is aimed at customers looking for a modern Bentley with a nod to earlier versions.

The car’s roof was built using traditional coach building techniques, and the rest of the exterior is easily identifiable due to its striking resemblance to the brand’s traditional design language. The interior, on the other hand, is as high-end as it gets, with an analog clock and instrument cluster that is a throwback to the past powering the vehicle.

This gigantic 2.6-ton behemoth is powered by a 6.75-liter v8 engine that produces over 505 horsepower and 100 pound-feet of torque depending on the variant. The good news is that it delivers all of its power in the low range, so you don’t have to rev it up to 7000 RPMs. Regrettably, Bentley will cease manufacture of this magnificent creature indefinitely.

The 2021 Range Rover SV autobiography demonstrates once and for all that it can also compete in the luxury segment. This new model combines unrivaled workmanship with cutting-edge technology to create a vehicle that makes every ride a study in luxury travel.

It has adaptive air suspension, a top-of-the-line safety system, and a slew of other systems that work together to make your time in the SV autobiography as comfortable as possible.

On your tour of the SV autobiography, one thing you’ll notice right away is how seamlessly technology integrates with more traditional car crafting staples. For example, the four-zone climate control blends seamlessly into the cabin design, and the 10.2-inch touchscreen infotainment system with dab tuner, BlueTooth USB connectivity, and a tv tuner preserves the classic feel of the interior while providing the very best of cutting edge technology.

have always been recognized for their performance, but the new 7 series includes all the luxury one would expect from a BMW. Both the external and interior styles have been changed, and the famous kidney grille is now larger and broader than any other 7 series.

The new 7-series is available in a variety of engine options, with prices starting at roughly 87 000 euros.

The Lamborghini Urus is without a doubt the sportiest SUV you’ll ever own, but despite being a pure performance vehicle, Lamborghini has gone to great lengths to make it as comfortable as possible for you. The URUS not only gets top grades for performance, but it also has that characteristic Lamborghini design on the outside that makes it instantly recognized from afar.

The interior of the urus is just as polarizing as the exterior, and every inch exudes pure performance and exclusivity. The most important feature of the urus is its four-liter twin-turbo v8 engine, which sends 650 horsepower to all four wheels, giving you the most control and precise handling characteristics you can get from a vehicle of this size.

The urus’s screaming engine propels it from zero to 60 miles per hour in just 3.2 seconds, with a top speed of 190 miles per hour. The basic price of this best-selling Lambo is about 220,000, which is justified given its insanely fast performance and sculpted appearance.

The Audi rs q8 isn’t a sports vehicle, but it is the most well-equipped rs spec Audi available. Surprisingly, it’s the same under the skin as a Lamborghini Urus, which is why it makes sense to rank it just under the ears.

The rsq8’s visual improvements make it look more aggressive than the q8, and the handling and performance attributes have also been greatly improved.

The inside, which is adorned with contrasting stitching and driver-oriented controls, continues the athletic vibe.

Although the rsq8 is already quite aggressive, there is an even more aggressive carbon black model available with even more carbon fiber.

Despite having the same soul as a URUS, the rsq8 manages to be a little more comfortable and luxurious than its cousin. The beginning price is only around 115 000 euros, which is significantly less expensive than the euros.

Top 10 Audi Cars in the World