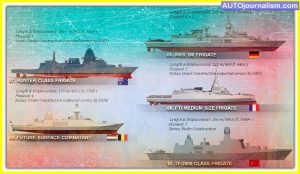 Frigates are an essential component of every navy. Since they are less expensive than large destroyers and cruisers, these ships normally make up the bulk of a naval force. Top 10 Most Powerful Frigates in The World. Every modern navy employs frigates in some capacity, alongside larger surface combatants such as destroyers and aircraft carriers. Autojournalism’s description of a modern frigate is:

A modern frigate is a warship that weighs between 300 and 7000 tonnes and is fitted with a variety of missiles, weapons, and radars. It is designed to operate autonomously, alongside a battle group, or as an escort for non-combatants, depending on the mission.

A warship weighing 5000-7000 tonnes does not always have to be called a frigate; many navies prefer to name such warships destroyers. The names of the ships may differ from one navy to the next, but the ships’ functions remain the same. For political purposes, some countries refer to their larger surface combatants like frigates, whereas others refer to their smaller surface combatants as frigates. A modern frigate can carry anywhere from 3000-7000 tonnes of cargo. However, only frigates with a displacement of 4000-7000 tonnes will be considered for the purposes of this article.

This article will focus on frigates planned and constructed in the twenty-first century. To ensure a neutral rating, each ship has been thoroughly examined. The ship’s guns and sensors, as well as their ability to handle numerous targets, are emphasized. Since each frigate has its own set of strengths and functions that differ greatly, a frigate should not be considered superior simply because it is rated higher. The top 10 Most Powerful Frigates in The World as well as their strengths and weaknesses, will be identified.

Top 10 Most Powerful Frigates in The World

Frigates were a vital part of navies until the mid-nineteenth century; the first ironclads were known as frigates due to the number of guns they carried; the next-generation frigate shapes are built to have a small radar cross-section and strong air penetration. These frigates’ maneuverability has been compared to that of sailing ships, and examples of these frigates can be included in this list.

So there’s the Turkish naval institute’s TF-2000 class frigate, which is being developed as a possible anti-air warfare frigate. This class would provide survivability in the face of aerial threats while also supporting mission functions like:

Information about the guns and sensors being evaluated are known, but each ship will have 64 VLS cells MK-41 launchers that fire SM2 standard and rim 162 EWSM anti-air missiles, two helicopters, and a 127-millimeter gun that fires anti-ship missiles and anti-submarine warfare torpedoes.

The FUTURE SURFACE COMBATANT, a project of the Royal Netherlands Navy and the Belgian Navy to replace current multi-purpose or m-frigates – comes next. While there are parallels between the projects and the British global combat ship, construction is different. This frigate will be fitted with:

And other types of equipment include:

The FTI MEDIUM SIZE FRIGATES, or intermediate-size frigates, are a French military initiative to design and construct a proposed class of frigates for the French navy. The program currently consists of five ships, with commissioning set to begin in 2023. The FTI MEDIUM SIZE FRIGATE will be modular, with enhanced self-defense and long-range capabilities. It will be equipped with a range of anti-aircraft and anti-submarine armaments to strike aircraft and submarines, as well as their crews, using digital technology for data processing and threat detection.

The HUNTER CLASS FRIGATE is the next project, which will replace the ANZAC class of frigates for the Royal Australian Navy. Construction is scheduled to begin in 2020, with the first of nine vessels entering service in the late 2020s, possibly in 2027. It is estimated that the program would cost 35 billion Australian dollars. The class would be about 149.9 meters long and have an 8,800-ton full load displacement. It will be capable of sailing at speeds of over 27 knots and will have a crew of 180. It would be able to carry one mh-60r asw helicopter as well as other Australian planes such as the mrh-90 helicopter.

The MKS 180 FRIGATE is a German navy proposed frigate class to replace the Brandenburg class frigates. The ships will be the navy’s largest surface warships since WWII, and they are scheduled to be commissioned in 2027. If equipped with a modular towed ( SPECIAL ) array sonar, the ships are expected to replace the BEST Brandenburg class of anti-submarine warfare ships. The class is designed to be mission modular, with the ability to fit so-called mission modules, which include device-based sensors and the weapon required to successfully complete a task.

The 30DX FRIGATE, a Japanese multi-mission frigate in production for the Japanese Maritime Self-Defense Force, started construction in 2018 and a total of 22 units is expected by 2032.

Along with stealth, the frigate emphasizes a high degree of automation, which allows the frigate to have a small crew of just 90 people as compared to other ships of similar size.

The ISTANBUL CLASS FRIGATE is a planned group of four frigates for Turkish naval forces built under the mil-gem national warship program. This class is an expanded version of the YADA class with a slightly larger hull for increased endurance and a mark 41 vertical launch system for multi-role capability. For enhanced multi-world fighting capabilities, the Istanbul class will be fitted with the MK-41 vls capable of firing at maca HISAR RIM 66 standard rim-162e SSM and vlasroc missiles, as well as other systems.

The TYPE 31 FRIGATE is the next ship on the list, a planned frigate class for the Royal Navy of the United Kingdom that is set to enter service in the 2020s. The type 31 frigate was born out of the 2010 Strategic Defense and Security Review, which approved the global combat ship replacement program to replace the Royal Navy’s 13 types of frigates. The Type 31 frigate is part of the British government’s national shipbuilding plan, and its armament includes vlsc sceptre anti-air missiles, a 57mm mk110 gun, and 40mm mk4 secondary weapons.

The NILGIRI CLASS FRIGATE, also known as Project 17a, is a successor to the Indian navy’s Project 17 Chevrolet-class frigate. A total of seven ships will be built, the first of which will be delivered in 2022. The ship will be 49 meters long and have a displacement of 6670 tonnes. The weapons platform in the Project 17a ships will be lightweight, and they will be armed with the Barak 8 and Brahmos. Construction times will be shortened, and productivity will be increased, thanks to the use of modular integrated construction.

Last but not least, the FFG (X) FRIGATE is the national designation for the constellation-class multi-mission guided-missile frigates for the US Navy, which will be delivered starting in July 2020 as a follow-on to the modular literal fighting ship announced in January 2019.

The u.s navy would like for the ship to be able to: