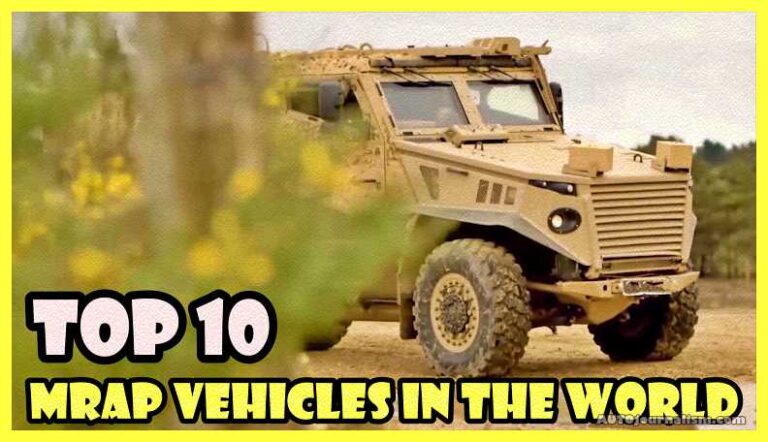 Top 10 MRAP Vehicles in the World

Here is the list of Top 10 MRAP Vehicles in the World, Mine Resistant Ambush Protected is a word used to describe the US military’s MRAP army light tactical vehicles, which are meant to survive improvised explosive device attacks and ambushes as part of the MRAP program. Today we will show you the top 10 best Mine Resistant Ambush Protected vehicles in the world. (mine-protected vehicle)

The Ocelot is a modular protected vehicle produced by UK-based businesses Force Protection Europe and Ricardo PLC. The Ocelot was created as a private venture to meet a British Army demand.

Personnel protection from direct fire artillery shell splinters and improvised explosive devices is provided by this mine-resistant vehicle. The patrol version of the Ocelot has a v-shaped hull that deflects mine blasts away from the vehicle and provides room for personnel.

Renault Trucks Defense developed the RENAULT HIGUARD Mine Resistant Ambush Protected vehicle as a private company. It is Renault’s first dedicated MRAP vehicle. The high guard is based on the leased Sherpa 6×6 tactical truck.

It was created for troop transit in asymmetric conflict zones where mines and improvised explosive devices are common. The vehicle has a v-shaped hull that deflects blasts away from the crew and passengers, as well as protection from land mines and IEDs. The MRAP has a two-person crew and can carry up to ten fully prepared soldiers.

The MaxxPro is a Mine Resistant Ambush Protected vehicle developed by Navistar International in collaboration with Israeli plasm for the US military’s MRA P program.

The KIRP is a Turkish Mine Resistant Ambush Protected vehicle that was designed by the Turkish BMC business in response to a need from the Turkish Land Forces Command. The v-shaped hull of this armored vehicle deflects mine blasts.

The crew and passengers sit in integrated Mine Resistant Seats, which cushion the force and pressure created by mind blasts. The Coeur P can endure the equivalent of eight kilograms of TNT in mind explosions. Depending on the arrangement, the MRA P can accommodate six to ten passengers.

The DIDGORI 3 was created by Georgia’s Ministry of Defense’s Delta Research Center to satisfy the needs of the Georgian armed forces. This Georgian armored vehicle was designed specifically for peacekeeping missions, combining elements from MRAPs, armored personnel carriers, long-range patrol vehicles, and Special Forces vehicles. The DIDGORI 3’s armor hall is made of welded steel.

His claim that 762 by 51-millimeter armor-piercing bullets may be protected all around For protection against anti-tank mines and IEDs, the vehicle has a v-shaped hull.

The Krauss-Maffei Wegmann dingo mine-resistant vehicle was created as a private venture and entered service with the German army in 1999. The dingo is an excellent choice for peacekeeping missions.

It has a strongly armored be-shaped hull that provides better protection against land mines and improvised explosive devices. It’s armed with a 7 62mm machine gun that can be commanded remotely. The vehicle is modular in design and can seat four to seven people depending on the wheelbase.

The Shrek 1 is a Mine Resistant Ambush Protected vehicle designed by the Straight Group of Canada in collaboration with Ukrainian autocrats. It is based on the Kraus 5233 4×4 all-terrain military truck. Its primary mission is to transport personnel in battle zones where mine dangers are severe.

This MRAP vehicle’s armor provides all-around protection against Soviet 762 by 359-millimeter armor-piercing bullets. The vehicle’s v-shaped hull can survive bursts equivalent to 14 kilos of TNT under any wheel or seven kilograms of TNT anywhere beneath the hull.

The URAL TAIFUN-U and mine-resistant Ambush Protected vehicle was developed as part of Russia’s large typin vehicle program. The letter U in the designation stands for Ural truck maker. The Ural type and MRA P’s main role is to transport troops and combat theaters where mines and improvised explosive devices are likely to be encountered. He has an armored module at the back that can hold ten troops.

The vehicle contains steel and ceramic laminated composite armor that provides all-around protection against 14 5-millimeter armor-piercing shots, according to the manufacturer. It has a v-shaped double hull that deflects mind blasts, and it can survive blasts equivalent to eight kilograms of TNT anywhere beneath the hall, according to the manufacturer.

Mine is the tightest tactical infantry transport and utility system I’ve ever seen. Next ER produced a vehicle that is resistant to ambush. It was designed as a private venture and is primarily aimed at export customers. This French armored vehicle has a v-shaped hull for better protection against mines and IEDs, and it can withstand a blast equivalent to 10 kilograms of TNT anywhere under the hull. The Titus has a three-person crew that includes a commander, driver, and gunner, and it can carry ten fully equipped troops.

This Ambush Protected vehicle has been proven during trials in South Africa and seats a crew of two plus twelve passengers.

So this is the list of Top 10 MRAP Vehicles in the World, MRAP army, if you like this article then share this with your friends. Thanks for Reading.