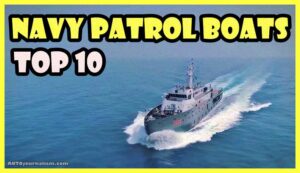 Here is the list of Top 10 Navy Patrol Boats, The ten most astonishing police boats in the world are stunning police boats of various types built to attain high speeds that are in service with the maritime police of various countries and are used for port surveillance missions or to patrol coastal areas.

It is a high-performance twin-engine boat designed by the Metal Shark firm in the United States to deliver excellent acceleration and maneuverability even in the most difficult situations. It measures 10 meters long by 1.8 meters broad and is driven by two outboard motors. This boat has been tested for a variety of police and military forces and is composed of welded aluminum plates, which provide tremendous strength and durability. It is fitted with several controls that simplify navigation and seating for a total of five occupants.

It is an inflatable boat with a rigid hull that was built in the United Kingdom by the rib craft company. It is designed to navigate in all weather conditions and can be used for a variety of missions such as border patrol or search and rescue. It measures 10.5 meters long by 3.5 meters wide and weighs 5.5 tons. It has two engines with a total of 650 horsepower and can reach a top speed of 50 knots or 92 kilometers per hour. She is currently assigned to the Dorset County Marine Police in the United Kingdom.

ex-cat number eight It’s a high-speed boat that joined the Dubai Police Department in 2014. It’s known as the “Lamborghini of the Seas” and is the fastest police boat in the Persian Gulf. It’s 10 meters long and has two engines with a combined 700 horsepower, allowing her to reach a top speed of 78 knots. This boat was supplied by the country’s leaders to aid the police force in their duties. This boat protects the waters off the coast of Dubai and can also be utilized for rescue operations.

number seven thirty-six It is a fast and agile boat built in the United States by the Metal Shark company. It is designed to reach high speeds even in big waves and to provide long-range and durability for long days sailing on the high seas. It has three engines totaling 900 horsepower and can reach a top speed of 54 knots. It’s 11 meters long and has a high-resistance welded aluminum hull. It’s been employed by security forces all around the world, including the police department of Puerto Rico.

It is a highly resistant and maneuverable boat built by the Goseamus company in Turkey. It is designed to be unsinkable and withstand any type of shock. It can be used for patrol or surveillance missions in port or coastal areas. It measures 14 meters long by 4 meters wide and has a displacement of 14 tons. It has two engines with a total horsepower of 900 horsepower and can reach a maximum speed of 32 knots. She can accommodate up to eight people and is now assigned to the Turkish Maritime Police.

It is a high-speed boat built by the Piyo Ship Company in Singapore. It is meant to be quick and durable, capable of intercepting ships at high speeds. It is 14.3 meters long by 4 meters broad and weighs 15 tons. It can attain a top speed of 45 knots and has a range of 380 nautical miles. It has room for two crew members and nine passengers, and it can achieve top speed in 20 seconds and stop in 10 meters to avoid collisions. This boat is used by countries’ coast guard services, such as China.

It is a fast and multifunctional boat built in Turkey by the izmir shipyard company. It is designed to be highly maneuverable, and her IPS powertrain provides great power and efficiency. It can be used for a variety of missions, including port surveillance and coastal search and rescue. It measures 14.6 meters long by 4.3 meters wide and has two engines with a total of 1100 horsepower. It can reach a top speed of 42 knots. She has a total capacity of 12 people and is now in service with the Turkish Maritime Police.

It is a hybrid and multifunctional patrol vessel built in Estonia by the Baltic Work Boats company. It can be used for patrol firefighting or offshore rescue missions even in the most difficult conditions. It is 44 meters long and has a displacement of 235 tons. It has two engines with a total output of 5 300 horsepower and can reach a top speed of 27 knots. She can transport smaller boats and employ them in various fast intervention missions. She has space for 28 people and a range of 3000 nautical miles.

It is a high-performance and capacity vessel built by the Marsan company in Thailand. It is designed to navigate in coastal areas or open sea performing patrol reconnaissance or search and rescue missions. It measures 25 meters in length by 5.9 meters in width and has two engines with a total horsepower of 24 horsepower. She is equipped with a variety of tools and can accommodate a total of 14 crew members. She has a range of about 600 nautical miles and is now in duty with the Thai Maritime Police.

It is a new generation patrol vessel built by the druse shipyard firm in Indonesia. It is meant to operate offshore and has a capacity for 68 crew members. It features a helipad for medium-sized helicopters and two vessels that deploy with cranes. It is currently in service with the Indonesian police and is used to patrol the Riau islands. It is 73 meters long by 11.5 meters wide and has a displacement of 1100 tons. It has two engines totaling 6,800 horsepower and can reach a top speed of 18 knots.