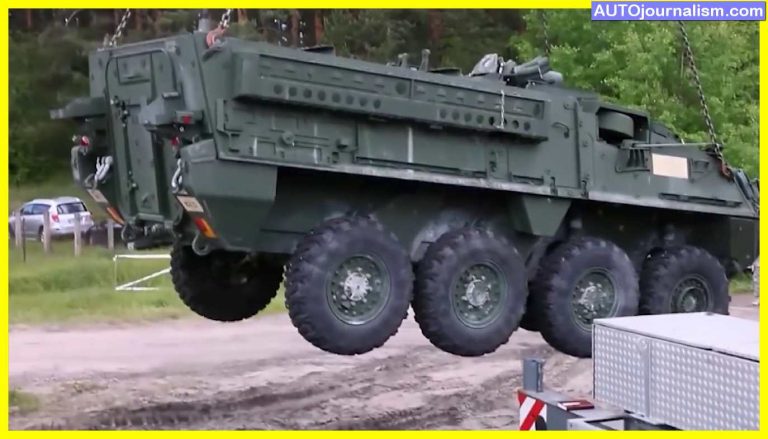 Top 10 Personnel Carriers In The World

Armored personnel carriers are military vehicles designed to transport personnel to special operations locations or directly along the battlefield. They can be equipped with machine guns or more powerful weapons to repel the enemy. Today, we’d like to talk about the size of these vehicles, So we’ve put together a list of the Top 10 Personnel Carriers In The World – Biggest Armored.

The VBTP – MR armored personnel carrier was created in collaboration between the Italian Iveco and the Brazilian Ministry of Defense. It has a two-person crew and can transport nine people.

The M1126 STRYKER armored personnel carrier is based on the Canadian Lav 3 light armored vehicle, and the US army received 4466 strikes.

The front arc of the striker is more resistant to impacts from 14 5 millimeter heavy machine gun rounds than many other armored personnel carriers. 762-millimeter NATO ball bullets are protected all around. The striker is armed with an M2 12 7mm heavy machine gun or a MK 19 40mm automatic grenade launcher located in a remotely operated weapon station.

The striker armored personnel carrier has a two-person crew that includes the commander and driver, and it can transport a squad of nine fully outfitted men. The m1126 has a length of 6.95 meters, a width of 2.72 meters, and a height of 2.64 meters.

The K808 is a new armored personnel carrier created by Hyundai Rotom to satisfy the needs of the South Korean army. The K-808 can carry up to nine fully equipped disc mounts.

The vehicle’s hull is made entirely of welded steel armor, which protects it from small weapons of fire and artillery shell splinters. The front arc is likely to sustain strikes from 12 7 millimeter armor-piercing bullets. The infantry carrier’s standard weapon is a protected 12-7 millimeter machine gun.

The k-808, on the other hand, may accommodate a remotely controlled weapons station or a two-man turret armed with a 30-millimeter cannon or other powerful weaponry. The k808 is 7.2 meters long with a height of 2.7 meters and a width of 2.5 meters.

The Pander 2 is a vehicle used by the Austrian army that comes in a variety of variants and can be equipped with a variety of turret systems. It can carry up to 12 troops and can be equipped with weapons up to 105 millimeters in caliber. The vehicle’s steel armor protects against 762-millimeter armor-piercing rounds, and optional add-on armor protects against 14 5-millimeter armor-piercing projectiles.

The armored personnel carrier Pander 2 has a longer wheelbase than its predecessor, measuring 7.54 meters in length. The height is 2 meters and the width is 2.68 meters.

The BTR-82A is a Russian military-industrial company’s advanced 8×8 armored personnel carrier designed for use by Russia’s and Kazakhstan’s militaries.

A 762-millimeter coaxial machine gun is used in the secondary armament. To provide ballistic protection, the armored hull is built of kevlar layered synthetic material. The multi-layer reinforced floor provides protection from improvised explosive devices and mine blasts.

The BTR-4 is an 8×8 armored personnel carrier that was designed as a private venture in Ukraine by the Kharkiv Morozov machine-building design bureau. The BTR-4 has a three-person crew that includes the commander, gunner, and driver. The vehicle can carry seven to nine troops depending on the armament module type.

The APC is equipped with a grom weapon station, which has a 30-millimeter gun, an automated grenade launcher, a 762-millimeter machine gun, and four anti-tank missile launchers. The BTR-4 provides all-around protection against 762-millimeter ball rounds and artillery shell splinters in its standard configuration.

The front arc appears to be capable of withstanding twelve seven-millimeter rounds, as well as six-kilogram anti-tank mine bursts. The BTR-4 has a length of 7.65 meters, a width of 2.9 meters, and a height of 2.86 meters.

The boxer, which was designed jointly by Germany and the Netherlands, has a three-person crew and can transport eight fully outfitted infantry personnel.

The vehicle is equipped with modular armor made of a specific ceramic mix. The triple hull floor is intended for optimal anti-tank mine protection. The front armor is said to be able to withstand 30-millimeter shots, while the overall protection can survive 12 7 millimeter fire. The weapon fit can be customized to meet the individual national standards of each country.

The armored personnel carrier is 7.88 meters long, 2.99 meters wide, and 2.37 meters tall. It is equipped with a 40-millimeter automatic grenade launcher, whereas Dutch vehicles are equipped with a 12 7 millimeter machine gun.

The PARS armored personnel carrier is a novel design created by the Turkish FNSS business in collaboration with a US GPV. The pars have a two-person crew and can transport up to 12 troops. The pars are designed to be modular and may be equipped with a variety of weapons, including exterior and turret-mounted weapons. It can hold one or two personnel turrets.

The modular design armor system allows the pars 3 8×8 hulls to be upgraded to the level of protection requested by the user.

The base plates of the hull create underbelly structures and specifically constructed mine-resistant seats are designed to keep personnel safe from high-level mine threats. The pars measures 7.96 meters in length, 2.7 meters in breadth, and 2.17 meters in height.

The EITAN is an 8×8 armored personnel carrier built in Israel that was unveiled by the Israeli Ministry of Defense in August 2016. It is handled by a three-person crew and can transport nine soldiers.

The armored personnel carrier EITAN 8×8 can be equipped with a variety of weapon stations. A remote weapon station mounted with a 12 7 millimeter heavy machine gun is installed on the APC variant. The EITAN’s hull is protected by a variety of armor systems, including a passive armor module on the front and flanks.

The vehicle’s floor provides excellent protection against the impacts of mines and improvised explosive devices. The armored personnel carrier has a length of 8 meters, a width of 2.8 meters, and a height of 2.5 meters.

The PATRIA AMV XP is a newer, better, and more powerful version of the PATRIA AMV XP, which is one of the world’s best-armored people carriers. The XP stands for increased payload protection and performance.

This armored personnel carrier is handled by a three-person crew that includes the commander, gunner, and driver. It can hold eight dismounted men and offers the highest level of protection. The PATRIA AMV XP’s front arc can survive 30-millimeter armor-piercing bullets. Armor-piercing bullets of 14 5 millimeters are protected all around.

Top 10 Best Self Propelled Anti Aircraft Guns In The World