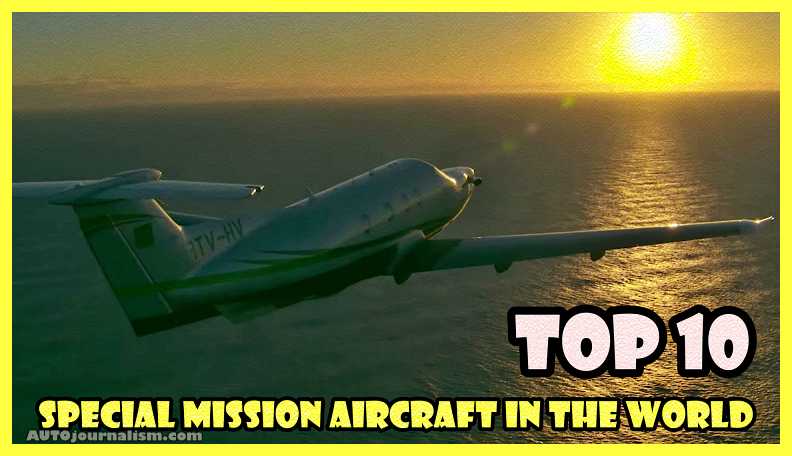 List of TOP 10 Special Mission Aircraft in the World

It has two Rolls-Royce 250 b-17f engines and can handle a maximum payload weight of 724 kilos. The defender can reach a maximum range of 1157 miles (1863 kilometers) and a maximum cruise speed of 202 miles per hour (326 kilometers per hour).

The Grand Caravan EX special mission variant is based on Cessna’s Grand Caravan EX turboprop utility transport aircraft, which has a hardpoint wing structure and was certified in mid-2016. It has a spacious and easily reconfigurable cabin, as well as hardpoint provisions that allow for a maximum payload of 1520 kilograms.

The plane can be used for a variety of purposes, including flying training, VIP travel, freight transport, and humanitarian aid. The grand caravan ex’s power system combines a pt-6a 140 engine with a four-blade aluminum constant speed and full feathering propeller. The plane can travel at a top speed of 224 miles per hour. With a top speed of 361 km/h and a range of 1109 miles (785 kilometers),

The specter pc-12 ng is a Special Mission vehicle. Pilatus PC-12 NG Spectre is a special mission aircraft offered by Pilatus Aircraft. It is designed to meet the needs of both military and law enforcement services. The aircraft’s passenger transport format can be converted to a complete cargo or combination layout, and an electro-optical and infrared sensor lift and operator console can be fitted to execute intelligence surveillance and reconnaissance or synthetic aperture radar operations.

Medical evacuation, air ambulance, and airdrop and jump operations are also supported by the aircraft. The pc-12 ng specter is powered by a Pratt & Whitney turboprop engine that drives a full reversing five-blade heart cell propeller. The aircraft’s payload capacity is 1209 kg, and its maximum range is 1916 miles (3085 kilometers).

The Guardian 400 is a unique mission version of Viking Air’s Series 400 twin otter aircraft, which was unveiled for the first time in June 2019 at the Paris Air Show. Electro-optical and infrared sensors can be carried by airplane. fixed camera systems radar system single dual workstations and a missile defense system for civil aircraft single and double seats, a stretcher, and front and back baggage compartments are all available.

The guardian 400 platform is capable of medium-range patrol, search and rescue, narcotics enforcement, critical infrastructure support, and medical evacuation operations. It has a payload capacity of 683 kilos and can go up to 2408 kilometers.

The King Air 250 special mission variants are in service with a variety of military and government customers, and the aircraft is widely used by major players in the flight inspection industry. The aircraft can be equipped with mission-specific equipment to perform training, VIP transport, maritime patrol, cargo transport, flight inspection, and high-capacity airline operations.

The King Air 350ER special mission versions are based on Beechcraft’s King Air 350i aircraft, which is part of Textron Aviation. These high-performance aircraft are designed to satisfy the demanding needs of special missions. The plane can be set up for pilot and crew training, military liaison, maritime patrol, passenger and cargo transport, flight inspection, and other time-sensitive duties. Two pt 6a 60a engines powers the king air 350 er aircraft.

The challenger multi-role aircraft is a special mission variant of the challenger 650 business jet developed by bombardier aviation. It was unveiled at the 2016 Singapore air show and integrates mission-specific systems for conducting search and rescue maritime patrol medical evacuation VIP transport and other specific duties such as weather monitoring.

The challenger can carry a payload of 2200 kilograms and includes space for operator and observer stations. sensors that are electro-optical and infrared A pair of GE cf-34 3b engines power a mission system and a medical suite. The aircraft’s maximum range is 4 603 miles (7 408 kilometers).

The g550 special mission aircraft’s power plant consists of two Rolls-Royce BRr-710 engines, each of which produces 15 385 pounds of thrust. The aircraft has a cargo capacity of 2812 kilograms and a maximum range of sixty 7767 miles kilometers. 12501

The Gulfstream g650er special mission aircraft is based on the Gulfstream g650 business jet and is designed for transport reconnaissance, airborne early warning, marine patrol, signals intelligence, and international atmospheric research missions. The aircraft’s capacious cabin provides for a variety of configurations and capabilities, while its multi-purpose interiors allow for quick integration of special mission equipment cargo or passenger-cargo payloads weighing up to 2948 kg.

The aircraft’s payload capacity is 18 023 kilos, allowing it to carry electro-optical infrared and radar systems, as well as armament systems, defensive aids, and refueling systems. The aircraft is powered by four Rolls-Royce engines. The maximum cruise speed of the C-130j SOF is 410 miles per hour. With a top speed of 660 kilometers per hour and a range of 2370 miles (3 815 kilometers), this aircraft has a range of 2370 miles.

Top 10 Air Taxi in The World