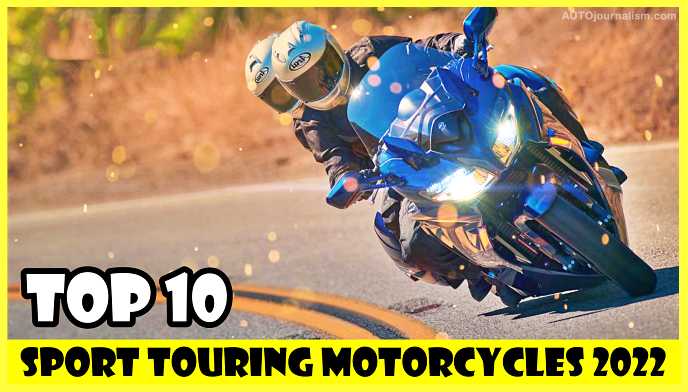 Here is the list of Top 10 Sport Touring Motorcycles 2022, if there is no sport and touring then this is just called writing from point a to point b for those who want to avoid this boring routine we have gathered a list of the newest sport tours that can provide exhilarating on-road experience across continents agile cornering fast acceleration perfect ergonomics and comfortable munching of countless highway miles fueled by the latest technology in the world of motorcycles.

The BMW k1600 family was introduced to the market in 2011. It brings cr5 compliance to the bike’s 6-cylinder engine and raises its level of technology today we are interested in the GT sports tour and its luxury version labeled GTL both benefit from a new full led adaptive headlight a huge 10.25-inch TFT screen with anti-reflective coating and a USB-c charging port hidden in the smartphone compartment.

The GTL now includes an audio 2.0 system as standard equipment. The 1629 cc and line 6 engine still produces 160 horses, but they are now available at 6750 rpm, 1000 rpm earlier. At 5250 RPM, the torque output increases from 129 to 133 pound-feet. Finally, the new 6-axis imu gives the bike three riding modes and dynamic traction control. The 1600 lineup continues to rely on the BMW dynamic electronic suspension adjustment that gets revised calibration.

The new GT’s engine is a 1301 cc liquid-cooled v20 from the super duke r that produces 175 horses and 104-pound feet and is paired with a 6-speed gearbox and features a ride-by-wire throttle. The usual wp semi-active suspension has four preload adjustability settings and a standard anti-dive function. Finally, the previous generation wheels are replaced with 2.2-pound slider alloys wrapped in Continental Canti Sports Attack 4

After celebrating its centennial in 2022, Italy’s Motoguzzi is ready to usher in a new era, and the all-new v100 Mandello is set to lead the way. The bike is packed with cutting-edge technologies, including a new small-block engine with 115 horsepower and 77-pound feet of torque. The latter upholds the company’s traditions by fully embracing the signature 90-degree transverse v architecture with distinct moto g sound, but unlike its predecessors, it lacks the moto g sound.

It is powered by modern liquid cooling and a wet clutch with hydraulic control. The v100 is also said to be the world’s first motorcycle with active aerodynamics. When deflectors engage and automatically adjust based on speed, it is side-mounted. Moto Guzzi claims that when deployed, the system improves rider protection by 22%. Finally, the model includes a 5-inch TFT screen, heated grips, and cruise control.

The supercharged Kapha is unquestionably the flagship of the modern sport-touring lineup, with its formidable 998 cc inline four-cylinder still producing 200 horsepower at 11 000 rpm and 101-pound feet at 9 500. This year, however, it receives optimized cam timing and an upgraded transmission. Aside from minor cosmetic changes to the headlight and exhaust, the Japanese have significantly improved their touring capabilities through the use of high-tech electronics.

The advanced tried to resist system, developed in collaboration with Bosch, employs two radar sensors to enable active safety features such as forward collision warning, blind-spot detection, and adaptive cruise control. The new h2 will most likely be equipped with kawa’s latest semi-active kecs electronic control suspension, which connects a skyhook software to the 43-millimeter inverted forks and a balance-free rear cushion model shock. Finally, this Ninja has a 6.5-inch Bluetooth-enabled spin infotainment system with direct access to the motorcycle settings.

If it’s a 999 cc four-cylinder producing 150 horsepower and 80 pound-feet of torque, the rider is aided by such must-have goodies as cruise control, ride by wire throttle, and a 5 mode traction control for the asking price, the new GSX s1000 gt runs effortlessly, which is a good thing to see. The GSX s1000 gt also receives a 6.5-inch DFD display, while the gt plus receive quick release panniers, a dollar windscreen, heated grips, and red brake calipers.

It has a lower 43 millimeter to show what type of cartridge it is. smaller 17-inch wheels, inverted front forks, a single tube pressurized shoulder shock, and smaller 17-inch wheels Its long-distance and tension are emphasized further by a slew of travel accessories such as standard panniers, cruise control, and heated grips. 1100 NT has a five-position electronically adjustable windscreen and a 6.5-inch TFT touch screen with three display modes. We require Apple CarPlay and Android Auto connectivity.

Many purists would classify the Multistrada line as pure adventure bikes, but this is a Ducati, so there’s plenty of sport in it. This motorcycle is essentially a renamed version of the 950, which has been the strata lineup’s entry point since 2018. The most recent evolution of its 937 cc testa strata 11-degree twin-cylinder engine produces horsepower at 11 000 rpm and 69 pound-feet at 6750. The engine’s gearbox and clutch have been lightened.

As usual, this Multistrada is available in standard v2 and premium v2s versions, with extended maintenance intervals of 9 500 miles for the oil change and 19 000 miles for the valve clearance chuck. The latter incorporates electronic compression and rebound damping adjustment with Ducati skyhook suspension Evo technology into the front 48 millimeters fully adjustable USD fork and rear fully adjustable motor shock and double-sided swingarm.

This year marks the 20th anniversary of Yamaha’s biggest sports tour, so the Japanese decided to give it a little boost for 2022, with standard heated grips with four presets and a glove box built into the upper fairing with a 12-volt outlet for charging previously added goodies like an electronically controlled suspension lean angle sensitive led lighting Yamaha’s exclusive throttle by wire system.

and advanced touring traction control is still included in the base package. The fgr1300ds has a beefy aluminum frame inspired by Yamaha’s sports machines, but the most exciting argument comes in the form of a 142 horsepower and lane four-cylinder engine that delivers muscular acceleration across the entire rpm range.

The versus line was designed to conquer the city or leave it far behind, and the 2022 overhaul aims to improve this travel potential even further. This versatile cowboy receives all led lighting and fresh front cal styling with a 4-way manually adjustable windshield. As before, the 649cc peril twin produces 67 horsepower and 55 pound-feet, but for the first time, the 650 receives a traction control system with two modes.

The nearly six-inch travel shovel fork and rear shock with adjustable rebound remain. The new 17-inch cast-aluminum wheels are wrapped in Dunlop Sport Max D222 tires, and the brakes have 300 and 250-millimeter discs and two-piston calipers front and rear. In 2022, the new instrumentation will be a 4.3-inch full-color TFT display with auto-brightness, Bluetooth smartphone connectivity, and two-color themes. Handguards are included with the lt ak grand touring tram. two panniers of 28 liters each and a top case of 47 liters with a one-key system

Previously known as the mt-09 tracer and tracer 900, this Yamaha changes its nameplate once more and this time arrives redesigned from the ground up. The all-new frame is now constructed from aluminum making it much lighter. It is fitted with a steel subframe a 2.4-inch longer swingarm and a semi-active electronically controlled KYB suspension with two damping adjustment levels.

The new triple-cylinder engine has a displacement of 890 cc and produces around 117 horsepower. It has four riding modes and is paired with a 6-speed transmission with an assist and slipper clutch as well as a quick shifter. Finally, the bike has a very comprehensive electronic system that includes increased traction, slide and wheelie control, cornering aware abs, and cruise control, as well as led cornering lights and dual 3.5-inch TFT screens.

returns to Kawasaki’s 2022 lineup with the goal of maintaining its position as the best-selling model in Europe and the United Kingdom. The modifications for this model are purely cosmetic. The updated bike is available in two new color schemes: emerald blazed green and metallic matte graphene steel crate, and it has new graphics on the body panels.