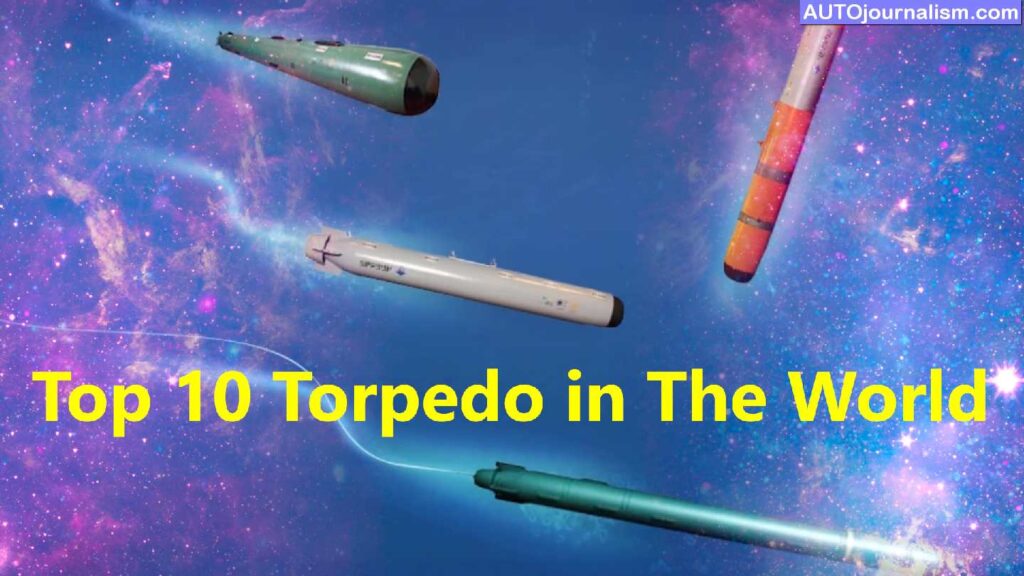 A modern torpedo is a self-propelled underwater ranged weapon with an explosive warhead that detonates on contact with or near the target. Torpedoes are the most effective underwater weapons for submarines, surface vessels, planes, and helicopters. Today, AUTOJOURNALISM has compiled a list of the Top 10 Torpedoes in the World, as well as the most advanced and deadly torpedoes in the world, based on factors such as:

Here is the Top 10 Torpedo in The World:

At number 10 is A244/S lightweight torpedo -The A244/S is an Italian lightweight fire-and-forget torpedo used for anti-submarine warfare. It can be fired from surface vessels or aircraft and uses an acoustic seeker to locate the target. The a244s mod 3 is the most recent addition to the a244s family, which is used by over 60 navies. The torpedo weighs 254 kilograms and has a blast-style warhead as well as a sophisticated acoustic seeker and advanced countermeasures capabilities. The a204s mod 3 has a maximum operating depth of over 600 meters. A dc motor drives two counter-rotating propellers on the a244s mod 3, giving it a range of 13.5 kilometers at low speed and a top speed of 66 kilometers per hour.

At number nine is Mark 54 lightweight torpedoes – The Raytheon Mark 54 lightweight torpedo platform is the most widely used lightweight torpedo platform in the world, and it builds on the established technology of the Mark 50 and Mark 48 ADC ap torpedoes. The torpedo can be launched from over 20 launch platforms, including surface vessels, helicopters, and fixed-wing aircraft, and it can navigate at its maximum operating depth. The torpedo weighs 276 kilograms and can be equipped with a 44-kilogram high explosive warhead as well as and a and aqs22 airborne low-frequency sonar. The torpedo’s liquid propellant propulsion system allows it to reach speeds of over 74 kilometers per hour.

At number eight is the mu-90 impact – The mu-90 impact is a third-generation advanced lightweight anti-submarine torpedo designed by France and Italy to compete with and outperform the US build mark 54 in the anti-submarine role. It has been developed in a special mu-90 hard kill variant for torpedo anti-torpedo protection weighing 304 kilograms and operating at a depth of over 1000 meters. The naval forces of France, Italy, Germany, Denmark, and Poland are meeting the operational criteria of anti-submarine warfare in the twenty-first century. The electrically propelled underwater weapon has a maximum speed of 74 kilometers per hour and a range of over 23 kilometers at low-speed thanks to an aluminum silver oxide seawater battery and propulsion system.

Number seven on the list is mark 48 ADCAP – The American heavyweight submarine-launched torpedoes Mark 48 and its improved advanced capability version were designed to sink deep-diving nuclear-powered submarines and high-performance surface ships. It is the most advanced heavyweight torpedo in use with the US Navy’s submarine fleet and allied nations. It has a launch weight of 1676 kilograms and can carry a 292.5-kilogram high explosive warhead. It is propelled by a piston engine that runs on auto fuel to monopropellant. Its maximum speed and range are 52 kilometers per hour and eight kilometers, respectively.

Number six is SHKVAL-E, The chevalier family of torpedoes are the fastest torpedoes ever made. They are super cavitating torpedoes that use the effect of supercavitation to build a bubble around the torpedo, allowing it to travel at high speeds underwater. The weapons system, which was developed by the Soviet Union, can be mounted on surface ships and submarines and can be deployed at up to c state 4 from a depth of 30 meters. The underwater weapon weighs 2,700 kilograms and is equipped with a high-explosive warhead with an impact proximity fuse. The propulsion system, which consists of a hydro reactive jet and a solid-fuel rocket booster, allows for a top speed of over 370 kilometers per hour.

At number five is SEAHAKE – SEAHAKE is the most recent heavyweight torpedo designed by Atlas Electronic for the German Navy as a follow-up to the dm2 torpedo launched in 1976. The German navy’s type 212 submarines use the sea Hague mod 4 as their primary underwater weapon. The 1.37-tonne heavyweight torpedo can be launched from both submarines and surface ships. The sea Hague mod 4 torpedo has a 255-kilogram warhead and Underwater and above-water targets are effectively engaged using fiber optic wire guidance. The torpedo has a peak speed of over 92 kilometers and a range of more than 50 kilometers thanks to a high-frequency permanent magnet motor and silver-zinc battery modules.

At number four is Varunastra – The Varun Astra is an Indian advanced heavyweight anti-submarine torpedo that can be launched from a ship or submarine. It was designed for the Indian navy by the defense research and development organization and Varuna is named after a mythical weapon created by the Hindu god of the seas Varuna. In his address, the minister said that the government supports exporting the torpedo to friendly countries such as Vietnam. The torpedo weighs around 1.5 tonnes and can hold a high explosive warhead weighing up to 250 kilograms. The torpedo is powered by a silver oxide zinc battery that allows it to travel 40 kilometers at a top speed of 74 kilometers per hour.

Number three is SPEARFISH -In oceanic and coastal waters, bae systems’ SPEARFISH advanced heavyweight torpedo is successful against submarine and surface threats. The 1.85-ton torpedo is used by the Royal Navy’s submarine fleet in the United Kingdom. The spare fish carries a 300-kilogram aluminized PBX explosive warhead that is guided towards the target by a high-capacity guidewire system and passive and active sonar. The spare fish’s power plant consists of a gas turbine engine that uses all of the fuel as a liquid monopropellant and hydroxyl ammonium perchlorate as an oxidant. The spare fish’s propulsion system allows it to engage targets at 48 kilometers at low speeds

At number two is the f21 heavyweight torpedo – The DCNS f21 A heavyweight torpedo is a torpedo that can be used against submarines and ships. as well as surface vessels. The 1.3 tonne f-21 can be built into all types of submarines, including nuclear-powered double sbns and sns as well as diesel-electric types, and can be launched in swim out or push outmodes. It will replace the f17 mod 2 torpedo aboard the French navy’s submarine, submarine fleet. It includes a Thales underwater system’s latest generation acoustic head as well as an impact acoustic fuse warhead. The f-21 can run in water depths ranging from 10 to 500 meters and is propelled by an electric motor powered by a silver oxide aluminum primary battery. It has a top speed of 93 kilometers per hour and a range of over 50 kilometers with a one-hour endurance.

At number one is the black shark – A new generation multi-role heavyweight torpedo fired from submarines or surface ships, the black shark, is designed to address threats from both surface and underwater platforms. The black shark is being developed to replace the Italian navy’s aging a184 heavyweight torpedo. It is currently being manufactured for many major naval forces and has been incorporated into the scorpion u209 and u214. and submarines u212 An advanced sonar transmission and receiving architecture, as well as a high-explosive warhead, are included in the 21-inch diameter wire-guided self-homing torpedo. The propulsion system, which includes a spinning brushless motor powered by aluminum silver oxide batteries and distorted propellers, allows for a top speed of 93 km/h and a range of 50 km.