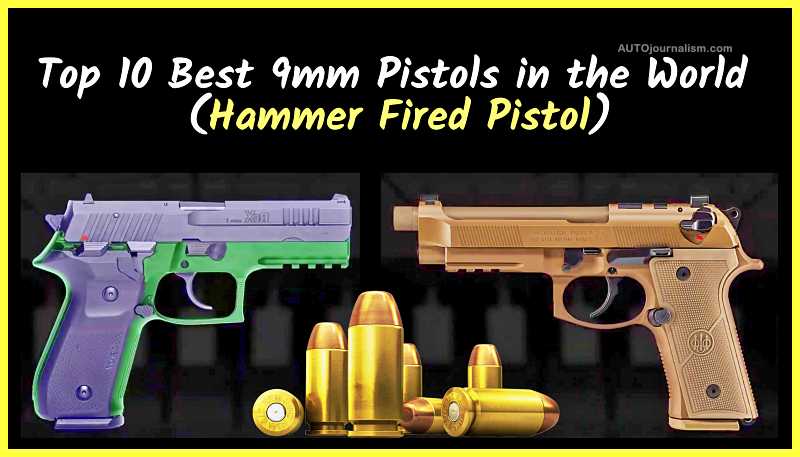 Here is the list of the Top 10 Best 9mm Pistols in the World (Hammer Fired Pistol), 9mm pistols are the world’s most popular and versatile handguns. In a world dominated by striker-fired pistols, we need to show some love to hammer-fired, double-action/single-action (DA/SA) handguns. The semi-auto category, which is often overlooked, bridges the gap between the venerable 1911 and the more modern striker-fired systems. There are literally hundreds of 9mm pistols and variants available. But which are the most durable, user-friendly, and accurate right out of the box, with no modifications required?

This list will include the best and most accurate 9mm pistols right out of the box, which will come in a variety of shapes and sizes and serve a variety of functions. So, to assist you in your decision, we’ve listed the best 9mm pistols on the market and provided you with the knowledge to select your own.

List of Top 10 Best 9mm Pistols in the World

It is equipped with the new Wilson combat high capacity x-frame, which combines accuracy and ergonomics. The x-frame is a 15-round high-capacity frame that is similar in size to a traditional compact single stack 1911. It accepts a high capacity magazine and has a smaller grip circumference than a standard 1911 while retaining traditional ergonomics.

The 1911 controls the ergonomic design of the x-frame in conjunction with your choice of small or large backstrap, and three different trigger pads can be tailored to fit all hand sizes comfortably. The EDC x9 offers superior ergonomics and concealability with modern service pistol capacity and reliability.

The sp 2022 has a dual single-action design and only three controls. The slide acts as a stop for the magazine release and the Decocker, allowing the pistol to be deployed quickly without the need to flip a mechanical safety on or off. The Sauer sp 2022 has a lightweight and wear-resistant polymer frame, as well as an ergonomic textured grip that provides instinctive pointability and a non-slip hold even with sweaty hands. The frame also includes a three-lug Picatinny rail for mounting aftermarket sights and lights. The pistol uses 15-round magazines. The six-hour sp 2022 is easy to use and maintain.

The px4 storm was designed to meet the most stringent military durability standards. It has been reported that the px4 has fired well over 150 000 rounds with zero part breakages. The pistol’s lines are snag-free, making unholstering and reholstering simple and fluid, and the trigger guard is rounded to aid in the proper positioning of the supporting hand. Thanks to a modular design with interchangeable backstraps, the pistol can be adapted to different hand sizes and shooting styles. It feeds from 17 round magazines.

The ambidextrous and reversible controls allow for easy training or shooting with either hand. It has a cold hammer-forged rotary barrel encased in an ultra-tough slide machined from solid bar stock. In addition to being one of the strongest actions available, the rotary barrel dissipates recoil away from the shooter’s hand and greatly reduces muzzle flip. The px4 storm is as tough and dependable as it is accurate, safe, and simple to operate.

The m9a4 is designed to exceed the expectations of even the most demanding tactical shooters, combining the proven design of the m9 with modern features such as a red dot optic compatible slide and aggressively textured vertex style thin grips for instinctive control and a more natural fit for all shooters.

The CZ-p09 is a full-sized polymer pistol with an impressive 19 plus one capacity in its flesh-fitting magazine. It was developed in collaboration with many operatives from armed forces around the world. At the end of its development, the CZ-p09 successfully passed many extremely demanding tests in the harshest environments. The frame is made of a modern mechanically and thermally extremely stable glass fiber reinforced polymer, and the new surface finish of the slide barrel and other minor parts significantly increases the weapon’s resistance to mechanical damage.

The recoil has been reduced in order to reduce corrosion as well. Even during rapid-fire, the weapon naturally returns to the target. The pistol’s ergonomics have been improved by rounding the edges, removing sharp edges, and adding front cocking serrations to the slide. The interchangeable backstraps in three sizes allow the weapon to be tailored to the needs of the shooter.

The P-30 is a 15-round polymer-framed short recoil-operated locked breech pistol that is fully ambidextrous. The basic design is based on the HK p 2000 and HK USP compact pistols, and like other recent HK pistol designs, the p 30 is modular to meet the needs of individual users. The grip has three interchangeable backstrap inserts and three interchangeable grip shells in small, medium, and large sizes. The cold hammer-forged barrel has hexagonal right-hand polygonal rifling, and the slide is made of a solid bar of nitrocarburized steel with both front and rear serrations. All P30 pistols include automatic hammer and firing pin safety.

Its all-steel large capacity design is based on the timeless concept of the cz-75, but its key parameters have been brought to absolute perfection. It meets the strictest armed forces requirements while also being the ideal choice for self-defense. It is fed by 18 round magazines. The magazine release with extended stem is easily adjustable for use with either the right or left hand. Because a stable grip is one of the most important requirements for achieving the best shooting results, the shape of the firearm was inspired by the legendary cz75. The grip panels are made of contoured rubber, which ensures a firm and adhesive grip in the hand even when wet.

The Sig Sauer P226 is the benchmark against which all other combat handguns are measured. The p226 is a masterpiece of highly functional firearm engineering that operates with a double single-action design with only three controls the slide stop the magazine release and the decocker allowing the pistol to be deployed quickly without having to flip a mechanical safety on or off it has several built-in safety features including a hammer block and firing pin block that make them suitable for safe carry it feeds from a standard double-stack 15 round magazine

which stands for universal self-loading pistol, has gained international recognition as an extremely accurate and dependable handgun. The controls on the pistol are influenced by well-known designs such as the 1911 pistol. This pistol’s standard magazine capacity is 15 rounds. It employs a fiber-reinforced polymer frame that is stiffened by stainless steel inserts in stress and friction areas. The USB control lever is a safety and decocking lever that is frame-mounted and easily accessible. For left-handed shooters, the modular design of the USP’s internal components allows the control lever function to be switched from the left to the right side of the pistol.

The air x01 does not claim to be a revolutionary breakthrough, but it is a significant evolutionary step forward in modern handgun design and manufacturing. The rex is an all-metal hammer-fired pistol that has undergone extensive military testing for reliability, extreme temperature, and drop tests. This light is made of solid bar stock that has been coated to prevent wear and corrosion and has forward caulking serrations.

The steel sights are replaceable with any aftermarket dovetail sights, and the pistol has an ambidextrous safety, full-length slide rails, and a large trigger guard for use with gloves. It feeds from standard 17-round magazines. The magazines have a one-of-a-kind progressive rate spring and are simple to disassemble for cleaning. The RX rex01s has high reliability and accuracy, as well as a low price.

THIS ARTICLE IS ONLY FOR INFORMATIONAL PURPOSES; THIS INFORMATION IS AVAILABLE ON THE INTERNET; YOU WILL GET FULL INFO FROM WIKIPEDIA + YOUTUBE, AND A CREDIT VIDEO IS ATTACHED.