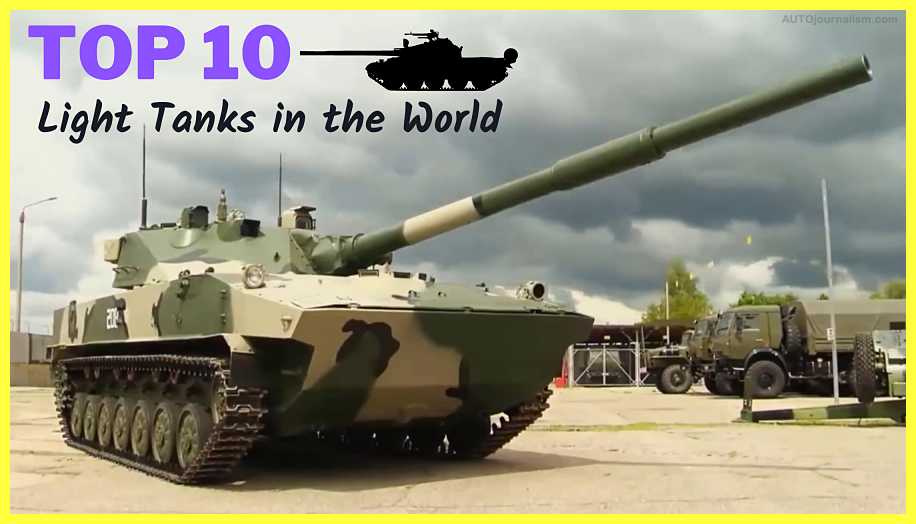 Here is the list of Top 10 Light Tanks in the World, A light tank is a tank variation that was originally developed for quick maneuvers in and out of battle in order to harass and outmaneuver larger tanks. It is smaller in size, has thinner armor, and a less powerful main gun, and is designed for improved tactical mobility, ease of transport, and logistics. They are primarily used for screening armored reconnaissance, skirmishing artillery observation, and complementing ground operations in a fire support role for expeditionary troops where bigger heavier tanks are unavailable or have difficulty operating safely or efficiently.

The rapid light tank was a prominent part of pre-World War II army building, where it was believed that they would be used to exploit enemy line breaks caused by slower heavy tanks, with the purpose of disrupting communications and supply lines. During this time, various small tank designs and tank kits were produced and known under a number of names, including the combat automobile.

The FV101 Scorpion is a British armored reconnaissance vehicle that served as the lead vehicle and fire support type in the combat vehicle reconnaissance family of seven armored vehicles made by Elvis. It entered service with the British army in 1973 and was retired in 1994. More than 3000 were constructed and employed as a reconnaissance vehicle or light tank; it retains the Guinness World Record for the quickest production tank recorded at 82.23 kilometers per hour (51.10 miles per hour).

Sabre is a variant of the FV-101 scorpion light vehicle. It was launched in 1995 as a less expensive means of constructing a comparable vehicle but with a significantly lower profile turret. Several faults were discovered during first combat drills, most notably the vehicle’s lack of defensive capabilities, therefore the turret of the Saber was modified to accommodate new smoke grenade launchers and a machine gun. An ammo hopper is mounted on the side of the machine gun, allowing it to be reloaded more quickly than a belt-fed machine gun.

During the war, 24 chaffers were actively used in combat by the South Vietnamese army, Pakistan, South Korea, Iran, and Iraq. While the Chaffee has long ceased to be used by the British and American armies, many countries with the less developed military still use the Chaffee as an auxiliary arsenal to this day.

The PT-76 is a Soviet amphibious light tank that was created in the early 1950s. It was widely marketed to friendly countries such as India, Iraq, Syria, North Korea, and Vietnam. The number 76 76 refers to the caliber of the primary armament, a 76.2-millimeter rifled tank gun. The pt 76 is utilized for reconnaissance and fire support roles, and its chassis serves as the foundation for several other vehicle designs, including the amphibious armored personnel carrier self-propelled anti-aircraft gun airborne self-propelled gun, and the anti-aircraft Mislaunch vehicle.

The Sk-105 crazier is an Austrian light tank that is mounted with a rifled 105-millimeter gun in an oscillating turret. It is claimed that around 700 of these tanks have been constructed. Due to its lightweight, the SK-105’s hull is made of welded steel and is separated into three compartments: drivers in the front, fighters in the center, and the engine in the back. The SK-105 can be delivered by C-130 Hercules cargo aircraft. Its turret is based on the French design used on the AMX-13, and its cannon can pierce 360 millimeters of armor.

The AMX 13 is a French light tank that was manufactured from 1952 until 1987. It operated in the French army, was sold to over 26 other countries, and is still in service with a few countries called after its initial weight of 13 tons and possessing a durable and sturdy chassis. It had an oscillating turret and revolver-style magazines, as well as prototypes and export variants. There are nearly 100 variations, including self-propelled cannons, anti-aircraft systems, and ATGM versions. 1981 Shin’heung the model

Its chassis is based on the North Korean VWT 323 APC, and the most intriguing feature of the pt 76 and 85 is its amphibious potential, with a speed of roughly 10 kilometers per hour on the water.

3. Stingray ( Light Tanks in the World )

The Stingray, also known as the Commando Stingray, is a light tank produced by Texturing Marine and Land Systems Division. It was specifically designed to use as many existing components of other American armored fighting vehicles as possible to keep costs down. The stingray was a private venture project aimed at foreign countries as of 2020 texturing has kept the stingray name registered and it was exported for use by the armed forces of Thailand, who remain the sole user.

The Type 15 light tank, also known as the Black Panther, is a Chinese third-generation light tank that is operated by the People’s Liberation Army ground force and the People’s Liberation Army Navy-Marine Corps. It could be the successor to the Type 62 light tank, which was retired from the Chinese army in 2013. Chinese residents claimed sightings of type 15, but its existence was finally acknowledged by the Chinese ministry of defense in December 2018. The tank was verified to be in service by 2018 and was included at the 70th national day parade on October 1st, 2019.

The 2S25 Sprut-SD is a Russian self-propelled tank destroyer or light tank. The spread strategy is intended to overcome tanks, hard-skinned equipment, and enemy personnel with airborne and amphibious landing troops, as well as specifically specialized ground forces. The 2s25 is a light amphibious tank that may be employed by land forces and naval infantry units. Currently, the only operators of the 2s25 are Russian airborne soldiers, who have 24 of these vehicles in service. The Republic of Korea and the Indian military have both shown interest in purchasing the 2s25 spread sd.

Question: Does the author of the Website really consider a Chinese tank weighing 33 tons to be a light tank ?

Ans: Soviet t55.t 62 tanks weighing 36 tons were considered medium tanks, and the T-64A weighing 38 tons was classified as the world’s first main battle tank, that is, a tank combining the armament and armor of a heavy tank and mobility and specific power per ton of weight from an average tank. And all these tanks had an anti-shell booking. A light tank, by definition, cannot hold anything larger than 50 mm, and even less with modern guns and shells.

Light tanks are of little use in a modern army but still of use in some third-world situations though even the ubiquitous RPG-7 can see them off. The exception is the British Scorpion, Scimitar variant actually, because its primary use is as a recce vehicle not as a tank but the British themselves moving onto more advanced modern recce solutions in the near future. Germany has introduced the Wiesel AFV which is an air-transportable retro tankette thing but to me looks like an anachronistic rehash of a failed concept and a liability on a modern battlefield.