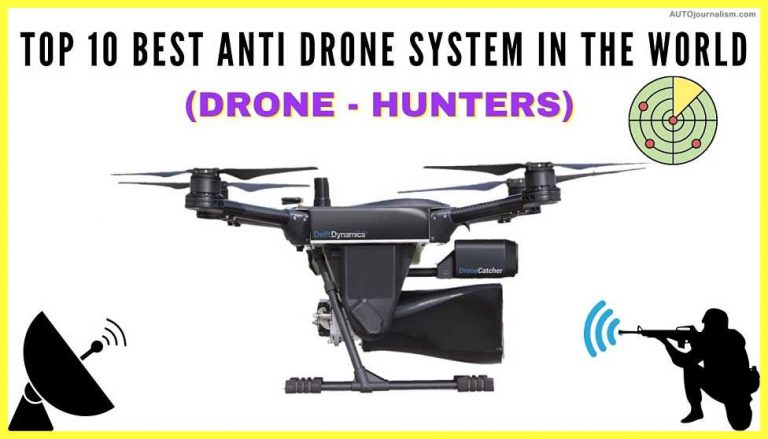 Here is the list of Top 10 Best Anti Drone System In The World, Drones are rapidly being employed in a variety of industries because they can swiftly obtain ready-to-use imagery and can reach regions that humans cannot. Drones, on the other hand, can be dangerous if not utilized properly. There have been numerous instances in recent years where drones have compromised safety and security. As a result, counter-drone technology has evolved. It is a system that is specifically designed to track and intercept drones. It is also known as counter-UAS, C-UAS, or counter-UAV technology.

Drone usage is a serious issue all around the world. Companies have devised astonishing futuristic methods for destroying drones in the skies. You’re going to become a drone hunter today. You could already own a drone or know someone who does. Drones have made their way into the commercial sphere, becoming a valuable tool for many businesses, in addition to racing, shooting 4K videos, and doing acrobatic acrobatics.

Drones, on the other hand, raise concern among many people and can be dangerous if misused. UAV use can be troublesome for a variety of reasons, from supplying contraband to prisons to delaying plane takeoffs to spying on individuals. As drone technology has proliferated, new anti-drone technology has emerged.

List of Top 10 Best Anti Drone System In The World

This anti-drone catcher is for you if you want something that looks like a loadout weapon from the Halo video game. The SkyWall Patrol is a net-launching bazooka that weighs around 10 kilograms.

The Skywall is a very clever creature. The bazooka can identify a drone and analyze its motions with its internal AI computer and smart sight to assure capture. The shoulder-mounted bazooka fires its net with compressed air, keeping the drone intact while guiding it back to land. Don’t worry if you need to defeat and eliminate several drones; the SkyWall can be recharged swiftly and efficiently.

This anti-drone weapon is a lightweight point-and-shoot device that looks like something out of Modern Warfare. The DroneDefender, which weighs 4 kilos, disables a drone’s radio, GPS, and ISM signals, forcing it to return to its owner and land.

The DroneDefender is already in use by the US Border Control, Department of Homeland Security, and Department of Defense, despite the fact that it is not yet commercially accessible. Just be cautious about utilizing something like this in public, as it resembles a custom loadout from a first-person game and could lead people to believe you’re a sniper.

Drones could fall into the wrong hands and be used as a terrorist weapon, which is always a concern. Military contractors in the United States are well-prepared for such an eventuality. The Anti-Drone “Death Ray” Truck was developed by Boeing.

The HELMD, or High Energy Laser Mobile Demonstrator, is a weapon installed on a truck. The weapon, which is controlled by an Xbox-style gamepad, fires an invisible laser beam at drones in practically any weather situation.

The DroneGun, another signal jammer on this list, penetrates into the drone’s “mind” and prevents it from being operated or commanded. DroneGun allows users to concurrently jam various RF frequency bands.

such that the drone loses contact with its controller and immediately stops flying and transmitting footage The drone must either land or return to its owner right away. Thanks to its GLONASS positioning, the device can knock out UAVs from as far as 1.2 miles away.

Drones, as previously indicated, are becoming a popular means of smuggling contraband into jails. SkyFence is here to put a stop to it. The 2,000-foot drone screen, which was installed at a prison in the United Kingdom, is designed to wipe out any rogue UAVs flying in the region.

The SkyFence System jams drones’ flight control signals as they fly past with a variety of signal disrupters, forcing them to return to where they set off.

Millions of dollars have been spent by the US government on anti-drone technology, and for good cause. Though no incidents of people arming drones with explosives for malicious intentions have been documented, there have been cases of people utilizing drones as weapons in Germany and Japan. This is why the Pentagon’s Joint Counter-Small Unmanned Aircraft Systems Office is testing a variety of anti-drone weapons for possible deployment in the field. They’re testing a variety of gadgets that can disable any form of UAV, regardless of shape or size.

Hacking a drone in flight, like something out of a spy movie, is a very viable anti-drone option. However, it could also lead to increased abuse. You can remotely hijack a drone using malware, as demonstrated by hacker and researcher Rahul Sasi, by destroying the inbuilt autopilot and gaining control of the drone. You’ll probably be able to hack into any UAV with a click of a button on your computer or smartphone in the not-too-distant future.

What better method to catch a drone than with one of your own? A Drone Catcher is a Multicopter created by Delft Dynamics that surrounds target drones and either tows them to safety or drops them with a net. Some of the other anti-drone technology on this list can harm a drone, which is why the DroneCatcher ensures that you can take down a drone without losing any evidence.

A device that detects an object via radio radiation. Drone detection radar sends out a signal and measures the direction and distance by receiving the reflection (position). Most radars send out a burst of the radio signal and then listen for the ‘echo.’ Almost all radars are built to ignore tiny objects. They’re built for tracking huge objects like passenger planes.

Pro: Long range, persistent tracking, very accurate localization, can handle hundreds of targets at once, can monitor all drones regardless of autonomous flight, regardless of visual conditions (day, night, fog, etc.)

Cons: Detection range is dependent on drone size, most do not distinguish between birds and drones, and interference requires a broadcast license and frequency verification.

Birds of prey were a potential alternative for law enforcement wanting to get rid of renegade drones, albeit the tactic is likely to be retired permanently. Eagles and hawks have been trained to hunt down drones on demand. With their vast wingspan and strong talons, eagles are among the most adept hunters in the animal kingdom. The Dutch police even displayed some of the birds they trained to hunt down drones in early 2016. However, because the vicious birds did not always act as intended, they were eventually withdrawn.