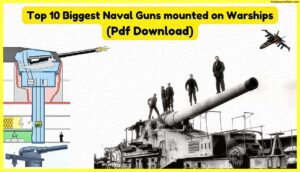 Today in this article we will give the List of the Top 10 Biggest Naval guns mounted on Warships, Massive artillery pieces have been designed in an effort to surpass one another’s capabilities on the battlefield. Some of these massive pieces are used on land while some are mounted on a warship. Which do you think are the biggest naval guns so far? Auto journalism will present you here the 10 biggest Naval guns ever mounted on a warship. This list will not include those who didn’t enter service.

The 10th biggest Naval gun by caliber is The BL 15-inch Mk I. The Royal Navy’s most effective heavy gun to date was this naval gun. It entered service in 1915 and was used until 1959 and was a key Royal Navy gun in both World Wars. It was mounted on Queen Elizabeth-class battleships, HMS hood, Courageous Class battlecruisers, HMS vanguard battleship, and a few more. The farthest range shell hit by a battleship on another ever occurred during World War II thanks to the cannon. It hit on the Italian battleship Giulio Cesare with her first salvo at 26,400 yards or 24,100 m. Its maximum firing range is 30,680m and it fires a 1938-pound projectile.

Number 9 on the list of the top 10 biggest Naval guns by caliber is BL 16-inch Mk I. This was a British naval gun that was mounted on two Nelson class Battleships. It entered service in 1927. This gun fired a heavy shell that weighs about 2048 pounds at a rather low muzzle velocity of about 788 m/s. Its maximum firing range is 36, 375 m or 39,780 yards. The rate of fire is 1.5 rounds per minute. Due to its low muzzle velocity, the gun wore down rapidly and the accuracy was unsatisfactory, so much so that it was lowered. Hence this gun wasn’t seen as particularly successful.

at number 7 is the 16-inch/45-caliber Mark 6 gun. This 406 mm naval gun entered service in 1941 and was used until 1956. It was first equipped in the North Carolina Class battleships for the United States Navy. It was also used for the follow-up South Dakota class. The Mark 5 guns of Colorado-class battleships had a maximum range of 37,000 meters and a turret elevation restriction of 30 degrees. This cannon was an enhanced version of those guns. The heavy shell would be fired at a muzzle velocity of 700 m/s when the gun was fully charged.

At number 6 we have The 16-inch/50-caliber Mark 7 gun. This 406 mm United States Naval Gun was equipped in the Iowa-class battleships. It was its main armament. These guns were 50 calibers long or 50 times their 16-inch bore diameter, which makes the barrels 66.7 ft or 20.3 m long, from chamber to muzzle. They were capable of firing projectiles with a range of up to 24 miles and a weight range of 1,900 to 2,700 pounds at a top speed of 820 m/s. To operate each turret, a crew of 79 people was required. The turrets themselves cost US$1.4 million each, to which the cost of the guns had to be added.

The 5th biggest naval gun ever mounted on a warship is The 41 cm/45 3rd Year Type naval gun. This was a 16.1-inch breech-loading naval gun designed during WWI for the Imperial Japanese Navy. It was mounted in the Nagato Class battleship and it was its primary armament. The gun’s overall length was 18.84 meters and its bore measured 18.3 meters. It weighed 224,872 pounds. It fires a 2250 pounds projectile having a muzzle velocity of 790 m/s with a maximum range of 38,400 m. The gun’s firing cycle was one round every 24 seconds.

Number 4 on the list of the top 10 biggest naval guns ever mounted on a warship is the 16-inch/50-caliber Mark 2 gun. The main armament of the South Dakota-class battleships and Lexington-class battlecruisers of the United States navy is this gun. These built-up guns were 66 feet 8 inches or 20.32 m long, and 50 calibers or 50 times their 16-inch or 406 mm bore, from breech face to muzzle. With a full powder charge of 700 pounds, the guns were capable of firing a 2,110-pound Mark 3 armor-piercing shell with a muzzle velocity of 850 m/s firing out to an effective range of 45,100 yards or 41,200 m.

The BL 16.25-inch Mk I naval gun or the 110-ton gun or 111-ton gun is the 3rd biggest gun ever mounted on a warship. This 413 mm gun was used by the British from 1888 until 1909. This gun was equipped on HMS Victoria and HMS Sans Pareil. It was mounted in pairs in a single turret placed forward. It fires 1800 pounds of projectiles having a muzzle velocity of 636 m/s. Its maximum firing range is 11,000m or 12,000 yards. The great weight, low rate of fire, and short life of fewer than 75 rounds meant that the guns were less than successful and were in fact never fired in action.

At number 2 we have the BL 18-inch Mk I naval gun. This 457 mm naval gun was used by the Royal Navy during WWI. It was the largest and heaviest gun ever used by the British. It was mounted on HMS General Wolfe and HMS Lord Clive for coast bombardment duties. It was supposed to be mounted on HMS Furious battle cruiser, but the guns proved to be too powerful for Furious’ light hull, and they became available for other uses in 1917 after trials showed the ship could not handle the stress of firing. Only 85 rounds were fired in combat operations before the war ended. It entered service in 1918 and it was removed from service in 1920. It fired 3320 pounds of a projectile having a muzzle velocity of 740 m/s and a maximum firing range of 37,000m.

Now the biggest and largest Gun ever mounted on a warship is the 46 cm/45 Type 94 naval gun. It entered service in 1940 and was used until 1945. It was mounted on these powerful and heavy WWII Japanese battleships, the Yamato and Musashi. Their primary defense was firearms. When mounted, the turrets and guns weighed 2,510 tons each, which is roughly equivalent to the tonnage of a typical-sized destroyer from the time. The weapons could launch a projectile as heavy as 3218 pounds. The maximum firing range of this gun is 26 miles at 45-degree elevation and its effective firing range is 16 miles. It had a muzzle velocity of 780 m/s.