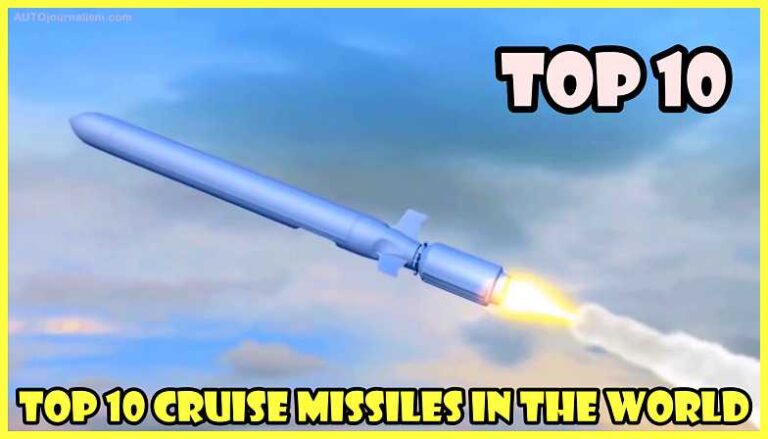 Top 10 Cruise Missiles in the World

Here is the list of Top 10 Cruise Missiles in the World, Cruise missiles are designed to deliver a large warhead over long distances with high precision. Today’s cruise missiles are even capable of traveling at supersonic or high subsonic speeds, are self-navigating, and can fly on a un ballistic extremely low altitude trajectory. Out of all the cruise missiles in the world today, we’ve chosen the ten best, and this list is based primarily on the quality performance guidance systems types of warhead and many other factors.

This is a ship-launched all-weather over-the-horizon anti-ship missile with a low-level seized gaming cruise trajectory, active radar guidance, and a warhead design that ensures great survivability and effectiveness against land and ship-stationed targets.

It is a long-range surface-to-surface and air-to-surface anti-ship missile that can also attack land targets. The rbs 15 guidance and control systems include an inertial navigation system and a GPS receiver as well as a radar altimeter and the Ku band radar target seeker.

The missile can be equipped with an optimized heavy high explosive blast fragmentation warhead and this resistance to enemy countermeasures the speed and range of these missiles are over Mach 0.9 and 250 kilometers standoff missile is Turkey’s first indigenous long-range autonomous high precision air-to-surface cruise missiles

For high precision guiding, it is outfitted with an imaging infrared seeker and an inertial measurement unit. The missile has a high rate of success against moving land and surface targets. stationary targets of high-value Strategic assets provide cover for exposed aircraft.

aircraft hangars, command and control centers, and sea surface threats. The SOM has a maximum speed of Mach 0.94 and a range of 180 kilometers. It can operate in all weather conditions as well as hostile environments.

This is a land-attack and anti-ship missile developed by the Norwegian firm Kongsberg Defense and aerospace The missile is constructed of materials designed to provide superior stealth capabilities.

The NSM’s stealth design allows the anti-ship missile to penetrate shipboard defenses. The missile detects and discriminates the targets using GPS-aided mid-course guidance and a dual-band imaging infrared seeker. The missile will weigh little more than 400 kilograms, travel at a speed of Mach 0.7 to 0.9, and have a range of kilometers or more.

This is a Boeing-built subsonic air launch cruise missile operated by the United States Air Force. This missile was created to improve the effectiveness and survivability of the Boeing B-52H. Strategic bomber Stratofortress During the flight, it is directed by a lightweight inertial navigation system element with ter-com updates.

This technology compares surface characteristics to maps of planned flight routes recorded in onboard computers to establish the missile’s location. As the missile gets closer to its target, the comparisons get increasingly exact, guiding the missile to target with pinpoint accuracy. Traditionally, the AGM-86b ALCMtransports a 200 kiloton w81 nuclear weapon for a distance of approximately 2 500 kilometers. It is 6.32 meters in length and weighs 1458 kilos.

This is a long-range air-launched stand-off assault missile created and developed by MBTA systems in France. The missile has fire-and-forget technology and is designed to target high-value stationary assets such as air bases, radar stations, communication hubs, and port facilities.

The missile’s navigation technology integrates GPS inertial navigation and terrain reference navigation for enhanced control over the course and accurate target strike. The storm shadow can engage targets precisely in any weather conditions, day or night, and can penetrate deep through hard rock targets.

This is a long-range, all-weather jet-powered cruise missile employed primarily by the US Navy and the Royal Navy in the ship and submarine-based land strike operations. The Tomahawk Block 4 follows a predetermined trajectory using GPS navigation and a satellite data link.

The missile can be armed with a nuclear or unitary warhead or a conventional submunitions dispenser containing combined effect bomblets, and it can strike high-value or heavily protected land targets.

It can either fly high at first and then drop towards the target, giving the p800 a maximum range of 300 kilometers. According to some reports, the p800 has a range of 600 kilometers. Its top speed is Mach 2.5, which may be too fast for close-range weapon systems.

This is a class of Russian surface ships, submarine launchers, aerial anti-ship and coastal anti-ship land-attack cruise missiles, and anti-submarine missiles designed by the Novator design bureau. It is guided by inertial guidance, terminal active radar homing, and Turcom DSM-ac.

This missile is a five-version modular system. two types of anti-shipping weapons, one for land attack and two anti-submarine weapons In contrast to the conventional linear flight path of other anti-ship cruise missiles, the three m54 caliber missiles are capable of making very high angle defensive high-speed maneuvers.

Brahmos is a supersonic cruise missile being developed by an Indian-Russian joint venture. The ship and land-based Brahmos missiles can carry a conventional semi-armor-piercing warhead of 200 kilograms, while the aerial variant can carry a 300-kilogram warhead. It is guided with active radar homing GPS global orbiting navigational satellite system and GPS aided geo augmented navigation satellite guidance.

These missiles can intercept surface targets as low as 10 meters in altitude. Brahmos has a top speed of Mach 3, making them the world’s fastest anti-ship cruise missile in use. When completely built, the hypersonic version of the Brahmos missile will be the fastest hypersonic missile in the world, capable of traveling at speeds ranging from Mach 5 to Mach 7.

Top 10 Solar Cars in the world

Top 10 Best Camper in the World