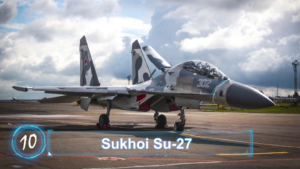 In this post, we will give you full information about the Top 10 fastest Fighter Jet in the world with Top Speed, Rankwise, Country Name, and Short Information with HD Images, SO Let’s start with Number 10.

Sukhoi Su-27 top speed 1,550 miles per hour or 2,500 kilometers per hour also referred to by the nato as flanker the Sukhoi Su-27 is Russian fighter aircraft introduced in 1985 to the air forces of the soviet union today it is one of the primary military aircraft of the Russian air force and a lot of other countries including Belarus, China, India, Indonesia, Kazakhstan, and Vietnam, development of the flanker began in 1969 at Sukhoi design bureau it was meant as a direct response to the USAF f-15 fighter although the initial prototypes were largely considered inferior to its u.s counterpart its designer kept on working on the aircraft and eventually managed to build arguably the finest air superiority fighter not only in Russia but all over the world of the 20th century

F-111 aardvark top speed 1,650 miles per hour or 2,655 kilometers per hour in the early 1960s both the air force and navy were looking for a new aircraft the former needed a supersonic fighter with the ability to fly at low altitude avoid radar detection and evade surface-to-air missiles meanwhile the latter wanted well-equipped carrier interceptor to engage Soviet bombers before they could even launch anti-ship missiles despite the different needs they only had one answer the F-111b which later developed into F-111 aardvark the navy ended up never taking to the F-111 whereas the air force accepted more than 500 units deployed for various roles including electronic warfare and strategic bombing, there have been many different developments over the years and the F-111fmodern yet with less expensive avionics system was the last version produced for the attack.

McDonnell Douglas F-15 eagle top speed 1,807 miles per hour or 3,017 kilometers per hour developed in the darkest hours of tactical air command during the Vietnam war the f-15 eagle has matured enough to transform into one of the world’s best air superiority fighters, it has a history of victories against multiple adversaries including the Foxbat MIG-25s at higher altitude the f-15 eagle has a maximum speed of Mach 2.5 at sea level it is capable of flying at Mach 1.2, in fact, the aircraft is so powerful that it could break the speed of sound flying straight up the aircraft was first introduced in 1976. today it is still in service with primary users including the USAF itself Japan air self-defense force royal Saudi air force and Israeli air force the f-15 remains one of the most successful modern fighters with no losses in air combat and over 100 victories.

Mikoyan Mig-31 top speed 1,900 miles per hour or 3,057 kilometers per hour an old adage from Russia goes something new is something old that everyone has forgotten which makes an appropriate expression for MIG-31 fighter first produced in 1975 the aircraft initially developed to chase the sr-71 blackbird above the soviet arctic it was a highly valuable asset for the soviet union in the 1980s as a hot pursuit in the air was nothing unusual now that the blackbird has been retired you may think that MIG-31 also is considered an obsolete aircraft but you’d be wrong apparently the technology still keeps up to modern day’s warfare so it has been officially repurposed as a delivery vehicle for hypersonic missiles known as Kinzhal or dagger the combination of lethal firepower and speed in MIG-31 earned the foxhound respect from nato back then.

XB70 valkyrie top speed 2,056 miles per hour or 3,310 kilometers per hour just last October national museum of the US air force had a massive work to do on one of its storage hangers which required moving a supersonic bomber known as xb70 valkyrie extreme precautions must be taken because it is the only remaining unit in the world back in its heyday in the early 1960s the xb70 was intended to be the strategic bomber that could fly swiftly into the soviet territory at high altitude in the event of a nuclear war the planned cruise speed for the aircraft was Mach 3 at an altitude of 70 000 feet according to NASA the xb70’s uniquely shaped wingtips allowed the aircraft to ride its own shockwave before the project was complete however the Kennedy administration shot down the plan to deploy the aircraft the program was canceled two experimental prototypes were still under construction those two did manage to see the light of day although one of them was finally lost following a mid-air collision in June 1966the remaining valkyrie became a research plane and retired on February 4th, 1969.

Bell x2 star buster top speed 2,094 miles per hour or 3,370 kilometers per hour the rocket-powered bell x2 star buster was a research aircraft designed to gather data on how aerodynamic heating affected aircraft structure, as well as the impacts of flying at high speed and altitude on the effectiveness of control and stability the USAF the national advisory committee for aeronautics and the bel aircraft corporation, worked together to develop the aircraft in 1945.on September 7, 1956, the bell x-2 became the first aircraft to reach an altitude of more than one hundred thousand feet when it flew 126 thousand two hundred feet high twenty days later on September 27th it was also the first aircraft to fly three times faster than the speed of sound clocking in at 3.2 ma although this last flight destroyed the aircraft and killed air force pilot captain Milburn g apt the aircraft was officially retired on the same day this record has stood for more than a decade until the x-15 came along.

Mikoyan MiG 25 top speed 2,171 miles per hour or 3,500 kilometers per hour part of the Russian s-155p missile interceptor system the MiG-25 is a supersonic reconnaissance aircraft developed for the main purpose of countering air targets in any weather conditions night and day the aircraft is a result of a joint effort between Moscow-based RSK MiG and the so-called aircraft manufacturing plant capable of achieving Mach 2.83 the MiG-25 remains one of the fastest combat aircraft ever produced outside of the Russian military the full capabilities of the aircraft was largely unknown until 1976 when soviet pilot victor Belenko defected to the united states via japan in a MiG-25the aircraft was theoretically capable of a maximum speed of Mach 0.36 but at Mach 0.32 the aircraft’s engine would overheat and the air-to-air missiles beneath the wings vibrated to a dangerous degree even if it cannot safely reach Mach 3.2 MiG-25 is still a respectably sophisticated aircraft.

Lockheed YF -12 top speed 2,275 miles per hour or 3,661 kilometers per hour the public saw Lockheed YF -12 for the first time at Edwards air force base on September 30th, 1964. the well-publicized announcement was partly intended to continue hiding the Lockheed a12which at that time was still a secret about six months after the first public showing YF-12 took a flight test that would set a speed record of Mach 3.2 an altitude record of 80 257 feet at least until blackbird surpassed it over the course of its program YF -12s flew almost every week unless grounded for maintenance as it turned out it was prone to airflow problem that caused thrust imbalance resulting in uncontrollable yawing of all three planes built there is only one remaining today displayed at the u.s air force museum.

Sr-71 blackbird top speed 2,250 + miles per hour or 3,620 + kilometers per hour flying at a sustained speed of Mach 3.3 at an altitude of 85 000 feet the sr-71 set the record for the fastest air-breathed manned aircraft on July 28, 1976.it was so fast that if anybody launched a surface-to-air missile in an attempt to take it down the standard evasive action was simply to accelerate faster in order to outfly the weapon the development of sr-71 was surrounded by secrecy during the late 1950s after all it was a spy plane designed to penetrate enemy territory without detection fast forward to 70 years later the blackbird still looks like something from the future even by today’s standards NASA performed the last flight of sr-71 in 1999 for aeronautical research since then all the surviving blackbirds have taken museums as their retirement homes

North American x-15 top speed 4,520 miles per hour or 7,275 kilometers per hour it has been more than five decades since the North American x-15 earned its title as the fastest aircraft ever flown when major William knight took the rocket-powered machine for a cruise at Mach 6.72flying at 102 000 feet above sea level on October 3rd, 1967, in other words, it reached the edge of outer space at the hypersonic speed it had to be carried beneath the wing of a NASA b-52 plane to an altitude of 45 000 feet prior to any flight to make sure that the x-15 could utilize all its fuels in total the aircraft made 199 flights and provided invaluable information for the development of spaceflight each flight lasted for just about 10 minutes it took the last flight on 24 October 1968.

Top 10 fastest Fighter Jet in the world with Top Speed

Top 10 Expensive Cars in the World