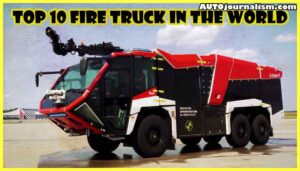 Top 10 Fire Truck in the World

In this article, we will give you info about the Top 10 Fire Truck in the World – impressive new generation fire trucks equipped with powerful water cannons which are used by emergency services for extinguishing fires in forests or airports around the world.

Fire Trucks in the World

It is a highly mobile 4×4 vehicle built on the chassis of a Tatra t815 truck in the Czech Republic. It is meant to move both on the road and across tough terrain, as well as battle forest fires. It is 46 feet in length and weighs 35 200 pounds.

It is a new extremely maneuverable 4×4 truck manufactured in Turkey that is meant to be used in airports and to respond quickly to any form of emergency. It is equipped with two strong water cannons that can discharge 1580 gallons per minute and are controlled electronically.

It has external cameras, 360-degree vision touch screens, and various controls, and it can go over any terrain and accelerate from 0 to 50 miles per hour in 25 seconds. Its tanks hold 1500 gallons of water, 210 gallons of firefighting foam, and 115 pounds of firefighting powder.

It’s a 6×6 truck with a modular design that was built in Austria on a Mercedes-Benz Xetros 3348 truck chassis. It spans 33 feet in length and weighs 64 000 pounds and is meant to put out airport fires swiftly and effectively.

Its tanks hold 600 gallons of water and 200 gallons of firefighting foam, and it can discharge 925 gallons of water per minute. It also features a powder extinguishing system with a capacity of 115 pounds, a 480 horsepower motor, and accommodation for four people, and is located 755 feet distant.

It’s a multipurpose high-performance truck made in Austria that measures 37 feet long and weighs 72 700 pounds. It’s employed in large airports where vehicles with high extinguishing capacity are required. It has a 750 horsepower engine and can achieve speeds of 75 miles per hour.

It has a tank capacity of 3 700 gallons and can expel 2 300 gallons of water per minute. It has a double water expulsion system with a range of 328 feet. It has a safe driving system and can accelerate from 0 to 50 miles per hour in 31 seconds.

It is a dependable truck with great power and acceleration that was built in Germany. It measures 38 feet in length and weighs 86 000 pounds. It is powered by a 770 horsepower engine that can reach speeds of 75 miles per hour. It is equipped with two powerful water cannons that can expel a total of 2 900 gallons per minute.

It’s a high-capacity, high-performance truck made in Turkey. It’s 41 feet long and weighs 92 500 pounds, with a 770 horsepower engine and 2 200 foot-pounds of torque. It can operate in temperatures ranging from -25 to 55 degrees Fahrenheit.

It’s a modular off-road truck built on the chassis of a Tatraforce t815 truck. It’s 40 feet long, weighs 94 700 pounds, and seats five people. It has a 700 horsepower engine and can reach 62 miles per hour.

It is a huge capacity, highly maneuverable vehicle created in Germany to provide extreme performance and reliability in the event of an emergency. It is 40 feet long and weighs 114 000 pounds.

It is a vehicle with a large extinguishing capacity that was built in Poland. It is 44 feet long and weighs 88 100 pounds. It has a total of four seats and is powered by two engines with a combined output of 1300 horsepower. It has 3 900 gallons of water, 420 gallons of firefighting foam, and 115 pounds of firefighting powder in its tanks.