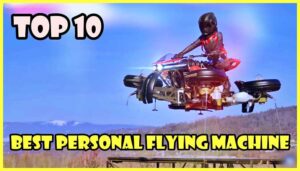 Here is the list of Top 10 Flying Machines in the World, We’ve had many movies over the years where we’ve gotten to see all kinds of futuristic flying machines. Back to the Future was the first movie that got us interested in flying cars and boards. Since then, many people have devoted their time and knowledge to create some of the most incredible flying machines, and we’re starting this list with the most exciting one.

A year ago, in February 2020, drone champions ag unveiled the world’s first manned aerobatic drone, which is now available for purchase, but it will cost more than you might anticipate, over a million euros. The DCL, or drone champions league, is an original concept that has become a symbol of what the future of drone racing could look like.

The world’s largest live drone racing league has made it possible for such a drone to be operated by a person who is on the said drone; it has the option of being controlled both from the inside and the outside like an actual drone; the drone itself can perform aerobatics such as loops and rolls in the sky, and it’s undoubtedly a once-in-a-lifetime experience.

Jet packs areas near to genuine flying as we’ll ever get, and while they don’t appear to be much, they do allow you to hover in the air and travel from point a to point b. One of the more intriguing things we’ve seen is the jb11 by jetpack aircraft, which is powered by six turbojet engines designed expressly for vertical flight, each of which produces 90 pounds of torque.

It can carry a heavier fuel load and has a longer endurance than the previous model, which was the jb-10 as of 2019. The cost of this jet pack is estimated to be around 340 thousand dollars. The jb11 can travel up to 120 miles per hour, giving the jet pack a travel time of 10 minutes.

The Flyboard air was designed by watercraft writer Frank Zapata founder of Zapata racing in 2016. The hoverboard jetpack hybrid gained a Guinness World Record for the farthest flight by a hoverboard in 2016. They claim it is by far the safest and most nimble personal aviation system on the market.

It is powered by gas turbines and can fly up to an altitude of 9 800 feet at a top speed of 93 miles per hour. Like any hoverboard, it requires some training before you fly it so you can maintain a good balance and control it. The engines are attached to your feet and controlled by a steering mechanism in your hands, allowing you to dive into and out of the water.

Imagine taking a taxi, but instead of driving on the streets, it takes you up in the sky and drops you off at your destination. This type of air taxi has been invented and is known as the velocity. It can fly quietly and connects key transport hubs such as airports and main stations to ensure faster and safer flights within the city. This air taxi is the fourth generation Evita vehicle.

that Volocopter was created and is by far the one that could be a game-changer for everyone in the world it can reach a top speed of 70 miles per hour and is designed to transport only two people including light luggage such as backpacks or purses all you need to do is a step in lean back and enjoy the view while the velocity does its job.

yet another jet pack, but this one is quite unique in comparison to the others This jet-powered carbon fiber suit has been dubbed the Jet Man, and it is likely the first time a man has been lifted off the ground and flown into the sky. The business has released a video in which pilot Vince Referet utilizes the Jet Man and flies up to 6000 feet in the sky.

The image was taken in Dubai, and it was noted that with this jet pack revenues reached 328 feet in just 10 seconds, 656 feet in 12 seconds, and 3280 feet in 30 seconds at an average speed of 130 knots. You steer it by moving your body, and the machine will follow each move.

We all know that flying vehicles don’t exist yet, but this lift aircraft Hexa may be as close as we’ll come right now, despite the fact that it only has a single seat for one person in the multi-copter. It’s still a hybrid of a plane and a drone with the goal of transporting you wherever you want to go. It’s an all-electric wingless multi-copter with vertical takeoff and landing capabilities.

It has a motor strut assembly that looks like a web of six inward-pointing sectors, twelve outer and six inter-electrically powered propellers, for a total of 18 propellers. If you want to own one, the price would be around $495 000, but they have great benefits that allow you to return it, sell it, or use it for your own personal use.

If you’ve ever wanted to ride your bike all the way to the sky, this is your opportunity. The hoverbike scorpion 3 by hover surf is the first bike that can fly, and it will be utilized by the Dubai police force. For this model, you do not need a pilot or aircraft license, so you can simply hop on and start flying.

It has a hover capacity of around 93 inches above the ground and can reach a speed of 60 miles per hour. The frame is made of various types of carbon fiber, which means that not only is this bike durable, but it’s also quite light, weighing just over 250 pounds.

This jetpack, also known as the mk2, has two miniature jet engines on each arm and a fifth on the back, giving the user complete control over the direction the jet pack is going. The suit generates around 317 pounds of thrust and 1050 brake horsepower while carrying 5.35 gallons of jet fuel, allowing it to propel a person weighing less than 200 pounds for about four minutes.

the more recent version of this jet suit The mk3 has already set a Guinness World Record with a top speed of 85.5 miles per hour and is expected to provide more flight time. Each of the jet suits costs 440 000, but they all stay at gravity’s facility where owners can fly their jet suits.

The jetson one is designed to be the first consumer production model. It was completed in late spring of 2020 and is currently undergoing flight testing. The aircraft itself weighs roughly 190 pounds due to the aluminum space frame and formula one race car-inspired carbon fiber composite safety cell.

So, they developed the vehicle capable of flying to ensure that the Jetson one is as safe as possible. Even if one of its eight electric motors fails, it has a triple-redundant flight computer, hands-free hover, and emergency functions, and will be delivered as a partially assembled kit for home assembly.

The kitty hawk corporation, funded by Larry Page, one of Google’s co-founders, has decided to build a flyer that can take off and land vertically. It uses 10 electric motors for vertical propellers and weighs 250 pounds. It can reach a maximum altitude of 10 feet and a cruise speed of 20 miles per hour because it is all-electric.

Flight time varies between 12 and 20 minutes before the vehicle shuts down and must be recharged. It’s designed to fit only one person inside who will also command the vehicle. It’s an incredible vehicle that we’d love to have. Unfortunately, the project was terminated after five years of hard work; we hope they recognize the potential of this flyer and revisit it.

Flying motorcycles are undoubtedly the future, and French automaker Lazarus appears to recognize this. The bike is smart, sleek, and futuristic, and is black and red with turbines that allow it to take flight on the sides, allowing it to fly up to several feet above the ground.

It’s also a limited edition, with just five of these motorcycles produced. Each LMB 496 costs $560,000, which is more than half a million dollars. The bike was designed for ease of handling and is also an electric motorcycle capable of reaching speeds of 62 miles per hour. It is capable of both flying and riding on the ground thanks to the two different modes available on it. We do wish they had more than five available for purchase, but again, very few people have half a million to spend on a flying bike.