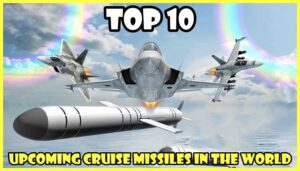 In this article, we will give you the list of Top 10 Upcoming Cruise Missiles in the World. The primary advantage of cruise missiles over ballistic missiles is that they are less expensive, smaller, more precise, and easier to develop. They are also unquestionably versatile, with the ability to be used for precision conventional strikes as well as nuclear missions. With technological advancements, major powers have been working to develop advanced cruise missiles, some of which are hypersonic. So, today, let’s take a look at the world’s ten deadliest cruise missiles.

List of Top 10 Upcoming Cruise Missiles in the World

So, first and foremost, we have the AGM-183 air-launched rapid response weapon, which is a hypersonic cruise missile manufactured by Lockheed Martin for use by the United States Air Force. The AGM-183 is claimed to have a top speed of Mach 20.

and an operational range of approximately 1600 kilometers (1000 miles). The weapon employs a boost-glide system in which it is propelled to hypersonic speed by a rocket before gliding towards a target. This hypersonic missile will be used by bombers like the B1, B2, and B52, as well as the upcoming B21 raider.

North Korea conducted weapons tests. It is scheduled to begin flight testing in 2022 and enter service in mid-2028. The missile, which is similar to Boeing’s experimental x-51 wave rider hypersonic weapon, is a ground launch cruise missile launched from a transporter erector launcher, similar to the United States Army’s upcoming long-range hypersonic weapon.

The sm-6 ground launch cruise missile (GLCM) is a variant of the standard missile sm-6 that will fill the gap between the precision strike missile and the long-range hypersonic weapon in November 2020.

Lockheed Martin was awarded a 339 million contract to produce the missile by 2023. The SM-6 GLCM can swat down air-breathing threats like aircraft and cruise missiles over long distances while also having terminal ballistic missile defense capabilities.

The FC ASW program, which stands for future cruise or anti-ship weapon, is led by European missile pioneer MBTA and is intended to replace air-launched scalp or storm shadow anti-ship missiles, as well as air and ship launch x asset and Harpoon anti-ship missiles.

that are currently in use by the French and British air and naval forces, the FC ASW could be built on a stealthy platform with a long range and a large payload. This heavy maneuverable missile could serve as a foundation for land and sea launch cruise missile anti-radar missile and even heavy air-to-air weapon.

Lockheed Martin began research on an improved wing design in March 2016 in order to increase range. In September 2018, the corporation was awarded a contract to produce an extreme range variant of the AGM-150. The JASSM-XR was previously known as the AGM-158d.

At a unit cost of 1.5 million dollars, the weapon would weigh around 2300 kilograms and have a range of 1900 kilometers with a 910-kilogram payload. The missile has a new missile control unit, different paint coating on the wings, an electric safe and arm fuse, a secure GPS receiver, and program protection requirements.

The Brahmos 2 is a hypersonic cruise missile being developed in collaboration between India’s defense research and development organization and Russia’s NPO mesh in Australia, with a range of 1000 kilometers.

Its top speed will be double that of the current Brahmos 1, and it has been described as the world’s fastest cruise missile, with a Mach 8 speed. During the cruise stage of flight, the missile will be powered by a scramjet air-breathing jet engine, which is expected to be installed in fourth-generation multi-purpose Russian naval destroyers.

The maritime strike tomahawk is a modified variant of the tactical tomahawk land assault cruise missile designed to destroy surface ships at ranges of up to 1600 kilometers. Its primary mission is to keep the Chinese navy’s surface force at bay in the South China Sea.

It will have improved navigation and homing capabilities, allowing it to take out targets at great distances with exceptional effectiveness. The US Navy intends to deploy the new missile onboard surface ships and submarines by 2023. The hard-target kill variant will be outfitted with a more powerful warhead capable of destroying densely built enemy assets.

and a missile range much greater than 1000 kilometers has required The missile, along with the navy’s ballistic missile submarines, will equip the rafale’s f4 model as well as future combat air system vehicles, forming one of the two legs of France’s nuclear diet.

Raytheon AGM-181 LSRO technologies According to defense news, the AGM-181 long-range stand-off weapon is a nuclear-armed air launch cruise missile that will replace the AGM-86 alcm. The USAF may purchase more than 1000 LSRO missiles with a range of more than 2400 kilometers.

The long-range standoff weapon will be launched from a variety of aircraft, including the B-52 bomber and the Northrop Grumman b-21 bomber. The LSRO program’s goal is to develop a weapon capable of penetrating and surviving integrated air defense systems while also pursuing key targets; initial operational capability is expected in 2030.

Last but not least, we have the Zircon, a hypersonic cruise missile that Russia is currently developing. The missile’s range is estimated to be 250 to 500 kilometers at low altitude and up to 740 kilometers in a semi-ballistic trajectory, but the average range is 400 to 450 kilometers. The zircon can travel at speeds ranging from Mach a to Mach 9, raising concerns that it could breach existing naval defense systems.

Because it travels at hypersonic speeds through the atmosphere, the air pressure in front of it generates a plasma cloud as it goes, absorbing radio signals and making it almost undetectable to active radar systems in flight. Zircon shares information and may be controlled by commands if necessary.