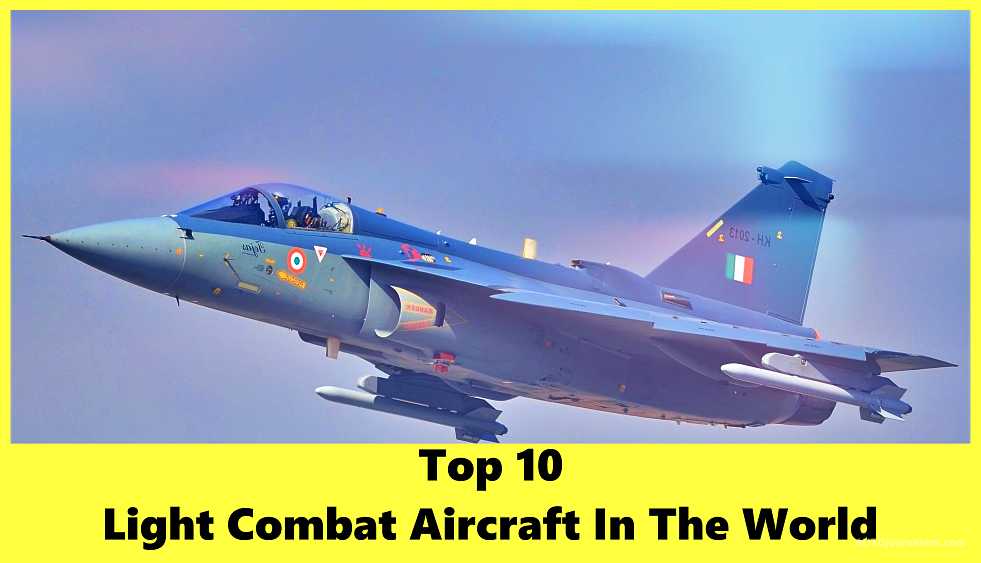 Here is the list of Top 10 Light Combat Aircraft In The World, A light combat aircraft is a light multirole jet military aircraft that has been modified or built to engage in light combat tasks, such as a light strike or attack missions, reconnaissance, or interdiction, while others retain their trainer role. They are also slower than their larger counterparts, with most capable of just subsonic speeds, while few can achieve Mach 1+.

Although some are capable of air to air combat or point air defense operations due to integrated or versions capable of carrying sophisticated multi-mode radar systems, they are mainly for self-defense or anti-hostile aircraft/helicopter missions, not for air defense as lightweight fighters are. Because of their small size and constrained design, most LCAs lack this feature or are insufficiently powerful. They can, however, still be employed to patrol the skies and conduct border patrol or air policing operations. Larger multirole or strike planes, such as the F-18, F-15E Strike Eagle, or Russian Mig-29, are usually smaller and have fewer weaponry. For COIN or CAS missions, the majority of LCAs are outfitted with bombs, rockets, or gun pods. In order to improve mission capability, several aircraft have been developed to include more complex armaments like as smart bombs and air-to-ground missiles, as well as ECM pods (Electronic Countermeasure) and electronic targeting systems.

List of Top 10 Light Combat Aircraft In The World

Light combat aircraft are multi-role military aircraft that are derived primarily from advanced trainers that have been modified or designed for light combat missions such as light strike, attack, reconnaissance, or addiction roles. They are also slower than their larger counterparts, with most only capable of subsonic speeds. These aircraft are typically smaller and have fewer weapons than multirole or strike aircraft.

such as the f-15e strike eagle from the United States or the MIG-29 from Russia Most light combat aircraft are armed with bomb rockets or machine guns, but some aircraft have been developed to integrate more advanced armaments such as smart bombs, air-to-ground missiles, and electronic targeting systems for improved mission capability. Now, let’s look at the top ten light combat aircraft.

Embraer’s EMB 314 Super Tucano, commonly known as the a29 Super Tucano, is a turboprop light attack aircraft designed to satisfy the needs of military forces around the world. Brazil’s air forces are the major operators of the aircraft. Colombia Afghanistan, Chile, Ecuador, and Indonesia are just a few of the countries involved.

The super Tucano can carry up to 1 550 pounds of armament, such as gun pods, air-to-air and air-to-surface missiles, precision-guided munitions, and bombs. The aircraft is powered by a p26a68c turboprop engine from Pratt & Whitney Canada, which drives a hard cell 5-bladed propeller. The engine produces enough power to reach a top speed of 593 km/h, while the external fuel tanks provide a maximum range of 3056 kilometers.

Beechcraft’s AT-6 Wolverine is a light attack and armed reconnaissance aircraft that competes with the A-29 Super Tucano for the US Air Force’s light attack aircraft program. The multi-mission aircraft has seven hardpoints and can carry a maximum payload of 1864khz.

The 86 wolverine is powered by a Pratt and Whitney Canada pt 6a 68 turboprop engine with a hard sole 4 blade propeller. The engine develops a maximum power of 1177 kilowatt and enables the aircraft to fly at a maximum speed of 827 kilometers per hour. The ferry range of the aircraft is 3195 kilometers when equipped with four external fuel tanks.

Based on the L-39 albatross, the Aero L-39NG is a new trainer and light attack aircraft designed by Aerovaticody mainly for the Czech air force. The plane took to the skies for the first time in December 2018. Basic and advanced flight instruction, light combat, closed air support, counterinsurgency, and reconnaissance tasks are all carried out by the jet aircraft.

It has five external hardpoints that can carry a gun pod, air-to-air missiles, guided and unguided rockets, and bombs weighing up to 1640 kilograms. The l-39 engine power plant combines the fj44 with a turbofan engine with a thrust rating of 16.87 kN. With internal fuel, the aircraft can reach a maximum speed of 780 kilometers per hour and a range of 2130 kilometers.

The Yakovlev Yak-130 is a twin-seat advanced jet trainer and light combat aircraft manufactured by Yakovlev. In February 2010, it was accepted into service with the Russian Air Force. The aircraft, which was built primarily for advanced flight training, can also perform light assault and reconnaissance missions.

It has 9 external stations with a 3000 kilograms payload capacity. It has the ability to carry air-to-air missiles. A gun pod, smart bombs, aerial bombs, and unguided rockets The aircraft is powered by two, and if Chenko progresses ai triple to 25 turbofan engines with a rated thrust of 24.52 kilonewtons apiece, it can reach a top speed of 1060 km/h and a maximum range of 2100 km.

The f-124 ga100 turbofan engine powers six underwing mountings that may carry bombs, rocket launchers, and air-to-ground and air-to-air guided missiles. The aircraft can carry a payload of 2 340 kilograms and has a maximum take-off weight of 8 000 kg. It has a maximum cruise speed of 936 kilometers per hour and a range of 2 530 kilometers with additional fuel tanks.

The Hongdu l-15 has six wing-mounted hardpoints that can carry a payload of three thousand kilos. Aircraft can carry short-range air-to-air missiles, air-to-surface missiles, rocket pods, and bombs. It is powered by two after-burning turbofan engines with a top speed of 1715 km/h and a ferry range of 3100 km (assuming chain code advance ai 222k 25f).

The Alenia Aermacchi M-346 Master is a light combat variant of Leonardo’s m346 advanced jet trainer that was unveiled at the 2017 Paris air show. The m346a is touted as a small attack aircraft with combat training capabilities. It has seven heart points that can carry guided and unguided air and air-to-ground weaponry, as well as external payload including gun reconnaissance and target acquisition pods weighing up to 3000 kilograms. Two Honeywell f-124 ga200 turbofan engines with a rated thrust of 28 kilonewtons each power the m346 face power plant, which ensures a top speed of 1075 kilometers per hour.

The Textron AirLand Scorpion is a light attack, intelligent surveillance, and reconnaissance aircraft offered and developed by Textron Airland, a joint venture between Textron and Airland businesses. It first flew in December 2013.

In its maximum payload capacity of 4173 kilograms, the textured scorpion can carry up to 2810 kg of ordnance, including a cannon rocket, laser-guided missiles, infrared air-to-air missiles, and different guided and unguided weapons. Two Honeywell tfe731 turbofan engines with a maximum thrust of 18 kilonewtons each power the aircraft, which can reach a top speed of 833 kilometers per hour and a range of 4074 kilometers h.a.l. Tejas is a young man.

The Hindustan Aeronautics Limited Tejas is a multi-role light combat aircraft built for the Indian Air Force and Indian Navy. It entered service with the IAF in July 2016. The supersonic jet has eight hardpoints and can carry a maximum payload of 3500 kilograms. It has a 23-millimeter twin-barrel cannon that can fire air-to-air, air-to-surface, and anti-ship missiles as well as precision-guided munitions rockets, and bombs. The Tejas LCA is powered with a General Electric f404 gei and 20 turbofan engine that produces 90 kilonewtons of thrust with an afterburner. The aircraft’s engine plant allows it to fly at speeds of up to 1975 kilometers per hour and has a maximum range of 3000 kilometers.

The ta-50, developed by Korean aerospace industries in partnership with Lockheed Martin, is a light attack aircraft lead-in fighter trainer version of the t-50 supersonic advanced trainer aircraft. The first ta-50 entered service with the Republic of Korea air force in 2011. The aircraft can carry up to 3 850 kilos of weaponry, including a general dynamics a53 barrel rotating gun, an aim 9 sidewinder, and two aim 120 AMR double am air-to-air missiles. Cluster bombs and general-purpose bombs are launched from hydra 70 and l-o-g-i-r rocket launchers, which are powered by a general electric f404 GE 102 turbofan engine. The aircraft has a top speed of 1852 kilometers per hour and a range of 1 850 kilometers.