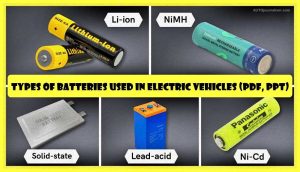 Today in this article we will give you full information related to the Different Types Of Batteries Used In Electric Vehicles. Even though the lithium-ion battery has established itself as the favored choice for electric vehicles, there are alternative technologies available on the market today, some of which are very ancient, such as lead acid batteries, and some of which are new, such as lithium-ion batteries. Today, we have a variety of commercially viable EV models, including sport and economy variants. Keep watching till the end since today in this video we analyzed several battery technologies used in the automotive industry. In 1859, French physicist Gaston Planté invented the rechargeable lead battery, which is still in use today.

Since then, it has made significant development. All scientific effort has aimed to establish the best possible compromise between the battery’s weight, storage capacity, production costs, longevity, recharging capability, and environmental impact, particularly when it comes time to recycle it.

How do the batteries work?

So, we all know how batteries are used in almost all of the appliances we use in our daily lives and vehicles. Chemical energy is converted to electricity with the chemical energy stored in a battery, which consists of a negative electrode cell with a surplus of electrons, which are negatively charged subatomic particles. When an electrical cable connects to the negative electrode cell, electrons flow from the negative to the positive. Since the vehicle’s engine is powered by it, the two businesses have devised a way to utilize the energy created by these flowing electrons to power a motor.

It must provide enough current to the motor over a period of time. Does this battery have an expiration date? Unfortunately, the battery has an expiration date of a few years. The battery dies when there is no electric flow between the electrodes, usually when the number of electrons on the positive and negative sides is the same. Because there is no current flow at this time, the battery expires and must be replaced.

The lithium-ion battery was the most widely used electric car battery; it was developed in the early 1990s and gradually established itself as the leading technology in transportation and the consumer electronics industry. You may already be familiar with it because smaller versions are used in portable devices like mobile phones and even laptops; however, the ones used in cars are much larger and have a higher capacity, and are known as traction battery packs. The power-to-weight ratio of lithium-ion batteries is quite high, making vehicles more energy efficient.

The battery also performs better than others at high temperatures, which is mostly owing to its energy-to-weight ratio, which is an important issue in electric car batteries. Lead acid and nickel metal hydride batteries have lower energy densities than lithium ion batteries.

As a result, it is possible to make the battery smaller than others while maintaining the same storage capacity; in other words, the lighter the battery is, the longer the car can drive on a single charge. The battery also has a low self-discharge level, which means it is better able to maintain its charge when compared to other options. Furthermore, most lithium-ion battery components can be recycled, which is a benefit for electric cars because they are designed with the goal of preserving the environment in mind. These batteries are mostly utilized in plug-in hybrids and battery electric vehicles.

How Does a Lithium-ion Battery Work?

The separator prevents electrons from flowing freely inside the battery. When a lithium-ion battery is used to power a device, it circulates electrons by establishing a potential difference between two electrodes, one negative and the other positive, immersed in a conductive ionic liquid called the electrolyte.

When the battery is discharging, electrons accumulate in the negative electrode and are released via an external circuit to travel to the positive electrode. When the battery is charging, the energy supplied by the charger sends electrons back from the positive electrode to the negative electrode. The different battery types differ by ion types, electrode materials, and associated electrolytes. The 12-volt lead acid battery, for example, which has historically been used to power the starter of a combustion engine car, relies on an electrolyte containing lead ions and lead-based electrodes, whereas the lithium-ion battery relies on lithium ions, hence the name given to this technology.

The battery in a car like the Renault Zoe is made up of individual battery units or cells that are connected and monitored by a specific electrical circuit. The number of cells, the size of each cell, and how they are grouped define the voltage delivered by the battery as well as its capacity. The automotive sector refers to the quantity of electricity it can store, which is usually expressed in watt hours or kilowatt hours.

Advantages: Lightweight lithium-ion batteries were first employed correctly in electric vehicles in the pioneering Tesla Roadster, which was produced from 2008 to 2012. It took about 3.5 hours to fully charge the car’s 6831 lithium ion batteries, which weighed half a ton (1 100 pounds) and stored 53-kilowatt hours of energy when fully charged, giving it a range of about 220 miles. Newer Teslas have significantly better cells and far more range. A normal Tesla Model 3 has a 75-kilowatt-hour battery, which is half as much energy as a roadster, which has just 4416 cells and has a range of 374 miles.

Disadvantages: Lithium ion batteries are only good for two to three years after they’ve been made, and they’re susceptible to extreme temperatures. It is relatively expensive to recharge a battery that has been entirely depleted.

The nickel metal hydride battery is a type of nickel metal hydride battery. Another type of electric vehicle is a hybrid vehicle, which has both a battery and a gasoline engine. These automobiles mostly employ hybrid nickel metal batteries, which are also compatible with battery electric vehicles. These batteries do not require any external power to charge. When compared to lithium-ion batteries, the charging of the battery is primarily dependent on the car’s regenerative braking speed and wheels. Nickel metal batteries have a longer life cycle and are safer in intolerant situations.

However, these batteries have a higher self-discharge rate, are much more expensive, and generate significant amounts of heat in high temperatures, which is common in a car. These drawbacks make nickel metal batteries a poor choice for vehicles whose batteries must be charged from an external source. This is also why these batteries are used in hybrid cars with performance similar to nickel cadmium technology. Because heavy metals are not present in nickel metal hydride accumulators, they have had a longer run of success.

This portable rechargeable battery technology was the most cost-effective at the start of the millennium, and it dominated the hybrid vehicle market until lithium-ion technology arrived. Nickel metal hydride batteries, which are commonly used in computers and medical devices, have good specific energy and specific power capacity. Nickel metal hydride batteries have a far longer life cycle than lead acid batteries, and they are also much safer and more resistant to misuse.

In 1899, the electric car legend is content featuring this technology was the first automobile to exceed 100 kilometers per hour well before combustion engine vehicles. Compared to hybrid nickel metal or lithium batteries, lead acid batteries are much heavier and eventually lose capacity. However, automobile companies still use it primarily because it is one of the oldest types of rechargeable batteries.

Furthermore, because they’ve been around for so long, the technology for properly fitting and using lead acid batteries has improved, resulting in a better end product. These days, lead acid batteries are used to power the electrical circuit of accessories or components specific to combustion engines, such as the starter.

Despite its large size and weight, the lead acid battery has a limited capacity. However, it is inexpensive, easy to manufacture, and recycle, and was used as the principal energy storage device for electric cars until the 1980s, when it was soon replaced by newer, more efficient technologies.

Although scientific research has long explored the concept of a solid state battery, it is only in the last 10 years that progress has allowed for the adoption of these technologies by the automotive industry in the not-too-distant future.

The idea is to replace the battery’s liquid electrolyte with a solid material, which may be a plastic polymer compressed in organic granules or a combination of the two. In theory, this technique is all positive.

It allows for increased energy density and stability while also improving temperature control. Despite this, the solid state is still in the lab prototype stage, and the lithium-ion battery has a long life ahead of it.

Nickel cadmium technology is recognizable to anyone who used rechargeable batteries in the 1990s. The advantages of nickel cadmium accumulators were numerous.

They did, however, suffer from the memory effect, a physical phenomenon in which a battery’s performance degrades when it is subjected to partially charged rain cycles. Nickel cadmium batteries, which were used in the production of electric vehicles in the 1990s, are now prohibited due to cadmium’s toxicity.

So, what are your thoughts on these batteries, and which ones do you think are the greatest for enhancing EV performance? Let me know in the comments below.

Ans- First Go to the Page and then Click on the Floating Print Button on your left side and then you can download any pdf with this Option. The image is attached below.