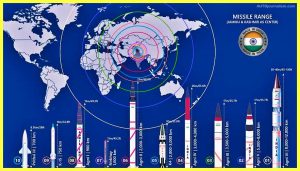 Here is the List Of Indian Missiles And Their Range Pdf (1998-2022) or List Of All Missiles Of India Pdf, Evolution of Indian Missiles, What makes India so successful at missile technology? Over time, humanity has progressed from sticks and stones to intercontinental missiles (ICBMs) that can target a location 16,000 kilometers away. Initially, the best missile technology in the world was in the hands of major powers like the United States, the Soviet Union, and China, but other nations have managed to develop their own arsenals, one of which is India.

Today we will discuss how this developing nation has advanced so rapidly in missile technology and how the importance of missile technology to India is growing day by day. New Delhi sees nuclear weapons and long-range missiles as critical to maintaining its strategic position in the Asian Pacific and achieving the role of regional power.

The Asian behemoth now has the capability to launch short, medium, and long-range ballistic missiles. After decades of investment in the development of indigenous missile technology, India’s missile sector is virtually immune to export controls.

The PRITHVI-1 is an Indian short-range ballistic missile. It is the first in a lineage of indigenous land and sea-based missiles that includes the prism v2, the ship-launched Dhanush, and the PRITHVI air defense interceptor. The PRITHVI 1 has been phased out of service and replaced by the Prahar. The missile has a minimum range of 40 kilometers and a maximum range of 150 kilometers.

The AGNI 1 is a nuclear-capable Indian short-range ballistic missile. It is the first of the five Agni missiles launched by the defense research and development agency. The nuclear-capable road transportable missile was initially deployed by the Indian army’s strategic forces command in 2007.

It has a range of 700 kilometers and a payload of 1000 kilos, allowing it to transport nuclear weapons with smaller payloads. The AGNI-1 could have a range of up to 1200 kilometers, which would cover the entirety of Pakistan.

AKASH is a short-range surface-to-air missile system designed to defend vulnerable locations and sites from aerial strikes. Akash can reach a maximum altitude of 20 kilometers while flying at supersonic speeds of roughly Mach 2.5. The Akash weapon system can engage several targets in group or autonomous mode at the same time, and it includes built-in electric countermeasures. The complete weapon system is configured on mobile platforms. The Akash weapon system has been inducted and is in use by both the Indian army and the Indian air force.

NAG, also known as “Prospina,” is a third-generation fire-and-forget anti-tank missile currently in service. It has a range of 500 meters to 20 kilometers and a first-shot hit probability of more than 90%. It also includes manned portable helicopter mounted standoff and IFV mounted versions.

TRISHUL was a short-range surface-to-air missile that was designed to be used against low-flying and sea-skimming targets due to development delays and flaws. TRISHUL was never put into production or used in service after testing and was replaced by the Israeli Barak-1 missile. The project was formally completed in 2008, and the DRDO went on to develop further surface-to-air missiles subsequently.

The PRITHVI 2 is a 350-kilometer-range Indian short-range ballistic missile. It’s an updated version of the PRITHVI 1, and it’s based on the Dhanush and PRITHVI 2 air defense interceptors that have been in service with the Indian air force since 2003. In India’s strategic force command, the PRITHVI 2 serves as a nuclear delivery vehicle.

The AGNI 2 is a medium-range ballistic missile developed by India that has a range of over 3500 kilometers. The two-stage solid-fueled missile was first deployed by India’s strategic forces command in 2004. It can carry a payload of up to 1000 kilograms to a range of 2000 kilometers, most likely a nuclear warhead with a yield of 150 to 250 kilos.

BRAHMOS, also known as PJ 10, are supersonic and hypersonic cruise missiles developed by India and Russia in partnership. Brahmos are the world’s fastest cruise missiles in use, with speeds ranging from Mach 2 to 2.8. They are launched from land attack ships, submarines, and aircraft. Supersonic ground attack anti-ship missiles are now in production, while longer range hypersonic and air launch missiles are in research.

With the building of the pad, which has been given the name Pradyumna, India’s ballistic missile defense gained a boost. The system was meant to neutralize missiles within a range of 300 to 2 000 kilometers at a speed of Mach 5.0 and was tested with a maximum intercept altitude of 80 kilometers. The technology used in the pad served as a forerunner of the indigenously built advanced air defense interceptor missile, which was tested in 2007, and the baroque 2, which was created in conjunction with Israel.

The K-15 SAGARIKA, which has a range of 750 kilometers, marks a turning point in India’s military history. It is the crucial third lag of India’s nuclear deterrent vis-à-vis its submarine-launched ballistic missile capability. The K-15 SAGARIKA was successfully tested in February 2008 and was subsequently integrated with India’s nuclear-powered arahant class submarine.

The AGNI 3 is a medium-range ballistic missile that was developed to replace the Agni 2. It’s a step up over the previous version, with a range of 3500 to 5000 kilometers, allowing it to engage targets deep inside neighboring countries. In June 2011, it was introduced into the armed forces, improving its attack capacity.

The Dhanush missile is an Indian short-range ship-launched ballistic missile. It is the third variant of the Prithvi missile family, which also includes the Prithvi 1, Prithvi 2, and Prithvi air defense interceptors. It is most likely liquid-fueled, has a range of 400 kilometers, and can carry nuclear or conventional payloads. In March 2011, it was successfully test-fired from a military cruiser, carrying on the tradition of the k-15. Sagarika

The Agni 4 is a two-stage Indian solid-fueled intermediate-range ballistic missile (IRBM) with a range of up to 4000 kilometers and a payload of one ton. It is a derivation of the Agni 2 MRBM with an expanded range. Since its maiden test in 2010, India’s flight has tested the Agni 4 eight times.

It was planned as a surface-to-surface ballistic missile variant of the k-15 Sagarika that could be held in underground silos for long periods of time and launched with the help of gas canisters as a trigger. The missile’s nuclear capacity improves India’s second-strike capability while reducing reliance on the k-15 ballistic missile, which was developed with significant Russian help.

Astra is a BVR (beyond visible range) air-to-air missile that was successfully tested in May 2011. The Astra is the smallest missile created by the DRDO in terms of size and weight. Within an 80-kilometer range, it was designed to intercept and destroy enemy aircraft at supersonic speeds in a head-on mode.

PRAHAAR is a 150-kilometer-range surface-to-surface missile that claims great agility, acceleration, and accuracy. Designed as a combat support system for the army, the missile can be fired from road mobile launchers and is particularly mobile in conflict circumstances due to its lighter build.

With its cylindrical fuselage, the missile resembles the US Tomahawk and the Russian Club SSn27. It is equipped with a land-based mobile launcher, but reports suggest it could be used on submarines. It uses a terrain following navigation system to reach up to 1000 kilometers nearby and can be launched from a variety of platforms including land, sea, and air.

The below table gives the list of important Missiles which are used by the Indian Armed Forces and are currently at different stages of development:

Types of missiles in India UPSC: