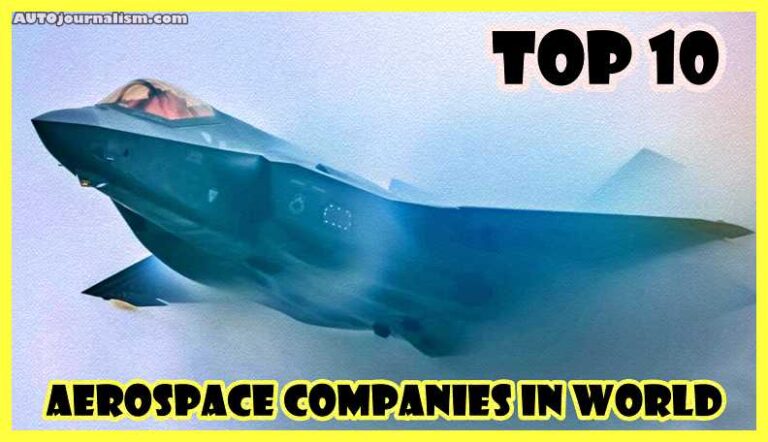 Here is the list of Top 10 Aerospace Companies in World, ⭐⭐⭐⭐⭐ The aerospace and defense business has grown this year as a result of rising demand for commercial and military aircraft, as well as a significant increase in defense spending. The expansion in the number of aerospace companies keeps everyone in the industry on their toes.

Top 10 Aerospace Companies in The World

Safran is a French multinational aircraft engine, rocket engine, aerospace component, and Defence company. It was founded in 2005 by a merger of the aircraft and rocket engine manufacturer group Safran aircraft engines and the company of general applications of electricity and mechanics. Its main divisions have helped it become one of the top 10 aerospace companies in the world in 2017.

include the aerospace maker sector, the Defence division, and the security division. Saffron works in the aircraft propulsion and equipment space and Defence areas, employing over 95,000 people and earning $26.8 billion in revenues in 2019.

Raytheon Company was a major US defence contractor and industrial corporation with core manufacturing concentrations in weapons and military and commercial electronics. It was previously involved in corporate and special mission aircraft until early 2007. Rating provides state-of-the-art electronics command and control systems electronic warfare position weapons and cybersecurity.

GE Aviation, a division of General Electric, is based in Evendale, Ohio, just outside of Cincinnati, and is one of the leading aircraft engine suppliers, providing engines for the majority of commercial aircraft. GE Aviation is a subsidiary of General Electric, one of the world’s largest enterprises. Until September 2005, the segment was known as General Electric aircraft engines, and the company’s revenue was principally driven by the sale of LD a P and F 4 1 4 engines. For civil-military and business aircraft, as well as marine applications, GE Aviation manufactures jet and turboprop engines, avionics, electrical power, and digital systems.

The corporation employs almost 40,000 people and operates production overhaul and repair facilities all around the world, with revenue of $30.82 billion in 2019.

Northrop Grumman, the seventh-largest aerospace company in 2019, is an American global aerospace and defence technology company headquartered in Virginia, United States. It provides innovative systems products and solutions for applications such as autonomous systems, cyber security, and space programs. It also leads the development of the 21 radar, a long-range stealthy strategic bomber capable of dropping conventional and nuclear weapons.

Honeywell International Incorporated is an American publicly traded multinational conglomerate firm located in Charlotte, North Carolina, United States. It is made up of four business areas that create aircraft systems, industrial products, and engineering services. The aerospace section of the corporation sells aircraft and vehicle parts, software, and services to original equipment manufacturers and other clients.

The company employs about a hundred and ten thousand people worldwide, with about 44,000 of them working in the United States. In 2019, the company brought in $36.7 billion in sales.

General Dynamics Corporation is an American aerospace and defence company that is the fifth-largest defence contractor in the United States and the sixth-largest in the world by sales as of 2019. The company is headquartered in Fairfax County, Virginia, and is ranked number 92 on the Fortune 500 list of the largest US corporations by total revenue in 2019.

Lockheed Martin Corporation is a global aerospace defence, security, and advanced technologies firm located in North Bethesda, Maryland, near Washington, DC. It was created in March 1995 by the merger of Lockheed Cooperation and Martin Marietta. Lockheed Martin is now growing as one of the major companies in the aerospace defence, security, and technology market.

The team for the development and implementation of technology solutions for the new USAF space fence is led by the F-35 Lightning II and the international supply chain. As of January 2020, Lockheed Martin employs roughly 100,000 people around the world, and its revenue in 2019 was 59.8 billion dollars.

United Technologies Corporation was an American multinational conglomerate headquartered in Farmington, Connecticut, that researches, develops, and manufactures products in a variety of fields, including aircraft engines, aerospace systems, HVAC elevators and escalators, building automation, and industrial products, among others. Through its Pratt and Whitney college aerospace systems artists and UTC climate control and security business sectors, the corporation provides a variety of commercial and military goods and services to its customers.

In April 2022, it merged with the Raytheon Firm, formerly AT&T Technologies, but in 2019, it is the third-largest aerospace company by market share, with over 240,000 people and revenue of $75.5 billion US dollars.

Airbus, a multinational aerospace firm based in Europe, is the continent’s largest aerospace and military company. Airbus has its headquarters in the Netherlands, although its stock is traded in France. Germany and Spain are two of the world’s most powerful economies It designs, manufactures, and sells civil and military aerospace products worldwide, as well as aircraft in the European Union and other countries. The company is divided into three divisions: commercial aircraft, Defence and space, and helicopters, with the latter being the most profitable in the industry in terms of revenues and deliveries. The majority of the revenue came from commercial aircraft orders, followed by helicopters, tanker aircraft, and telecommunications.

The international aerospace pioneer Airbus, which has been battling Boeing since the 1990s and taking the industry by storm since 1970, is at the top of the list.
While the COVID-19 has rattled every industry, the innovative aerospace firm has not been affected. In the first half of 2021, they sold 297 commercial aircraft, generating a staggering € 24.6 billion in sales in what has been a tumultuous year.
The A380, a current domestic model, and the Eurofighter, a modern swing-role fighter jet, are two of their most well-known products.

The Boeing Company is an American multinational firm that designs, manufactures, and sells Aeroplanes, rockets, satellites, telecommunications equipment, and missiles all over the world. Its headquarters are in Chicago, Illinois. Boeing is the world’s largest aerospace company, the world’s second-largest Defence contractor by revenue in 2018, and the United States’ largest exporter by dollar value. Commercial Airplanes, Defense Space and Security Global Services, and Boeing Capital Segments are all operated by Boeing.

Top 10 Off-Road Vehicles in the World