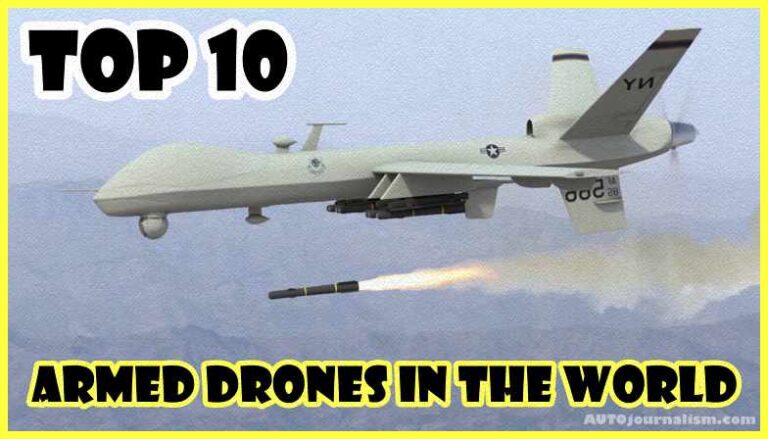 Top 10 Armed Drones in the World

Here is the list of Top 10 Armed Drones in the World with Highest Weapons Load Capacity, ⭐⭐⭐⭐⭐ Unmanned combat aerial vehicles (UCAVs) are unmanned aerial vehicles (UAVs) that carry aircraft ordnance such as missiles, ATGMs, and/or bombs in hardpoints for drone attacks and are employed for intelligence, surveillance, target acquisition, and reconnaissance. Drones are generally operated in real-time by humans, with varying degrees of autonomy.

UCAVs, unlike unmanned surveillance and reconnaissance aerial vehicles, are used for both drone strikes and battlefield intelligence. They can fire a variety of bombs at a variety of targets and protect themselves against manned and unmanned enemy aircraft. They are more lethal the more weapons they can carry. This video shows the Top 10 Combat Drones With the Most Weapons. Payload or Highest Weapons Load Capacity.

Combat drones are capable of deploying a variety of ordnance over a variety of targets as well as defending themselves against manned and unmanned enemy aircraft. The more weapons they carry, the more destructive they are. Without further ado, let’s get started.

Here are the Top 10 Armed Drones in the World

This is a Turkish aerospace industry-built unmanned aerial vehicle for the Turkish military. External payloads and armaments can be attached to three hardpoints under each wing.

The TAI AKSUNGUR has a payload capacity of 750 kg. It has a 375 percent higher maximum payload than its predecessor.

This military drone (EADS TALARION) can carry a maximum payload of 800 kilos of weapons and can perform out missions on land, sea, and in the actual environment.

It is an unmanned aerial vehicle developed by Ad-comp Systems primarily for the United Arab Emirates Air Force and capable of remotely controlled or autonomous flight operations. The armed variants of the YABHON UNITED 40 include YABHON UNITED 40 air-to-ground missiles with a rotary launcher that can carry 1000 kilograms of payload. Thunder cruise missiles from YABHON torpedoes and guided bombs from Mechanica

This is the most recent UCAV in the Rainbow series, and it is a medium altitude long endurance combat UAV with a wingspan of 21 meters and a payload of up to 1 200 kilos, making it 2.6 times larger than prior combat UAVs. Though it resembles the MQ-9 reaper in appearance, the ch5 rainbow can carry up to 16 air-to-ground weaponry, including blue aero 7 laser-guided air-to-surface missiles, TG-100 laser GPS guided bombs, and hj10 anti-tank missiles.

This is a Turkish unmanned combat aerial vehicle with a high altitude and long endurance. The first three units will enter service with the Turkish Armed Forces on August 29, 2021. Akinchi is equipped with a variety of armaments, such as smart micro munitions and general-purpose explosives. It’s also believed to be able to fire Boston or octagon air-to-air missiles both within and beyond observable range.

The Akinci can also fire Turkish-made rockets on some long-range air launch cruise missiles with a range of up to 150 miles. It has a payload capacity of 400 kilograms inside and 950 kilograms external, bringing the total combat load to 1300 kilograms.

This is an American remotely piloted aircraft created by General Atomics that was primarily utilized for air-to-air and air-to-ground armaments by the US Air Force and the Central Intelligence Agency, as well as a laser designator.

The MQ-9 is a medium to high altitude remotely piloted aircraft system with a long endurance mission. Its primary mission is to act as a persistent hunter-killer against developing targets in support of joint force commander objectives.

The Gbu-12 Paveway is one of the weapons carried by the MQ-9. 2 bombs with laser guidance the hellfire AGM-114 2 missiles (air-to-ground) It has a total weapons payload of 1,750 kilograms (3,750 pounds) thanks to the aim-9 sidewinder and the Gbu-30a joint direct attack munition.

This is a transect and secure-developed medium altitude long endurance unmanned air vehicle for the Russian air force and navy to conduct surveillance strikes and electronic attack operations.

The lt is visually impressive, and its reconnaissance capabilities are equivalent to the US-made MQ-9 reaper and RQ-4 global hawk unmanned aerial vehicles. The lots will serve as the backbone of Russia’s heavy drone fleet. It first went to the skies on August 20, 2019, and will enter service in 2021. It can carry a combat payload of 2 000 pounds.

General Atomics Aeronautical Systems designed the next-generation predator b multi-mission remotely piloted aircraft for the United States Armed Forces. The remotely piloted aircraft has nine heart points, four under each wing and one in the centerline, as well as precision-guided munitions paved with four laser-guided bombs and brimstone two air-to-surface missiles. The sky guardian can carry 363 kilograms of payloads in the fuselage and 1814 kilograms of payloads externally for a total payload of 2177 kilograms.

it may also carry guided bombs such as the GBU-31 GBU-32 and GBU-38 joint direct attack munition the internal weapons compartment of the UAS can hold up to 1588 kilograms of precise bombs giving a total of 2948 kilograms of weapons payload.

Let me summarize something about BAYRAKTAR AKINCI / Bayraktar Akıncı for aviation fans:

I expressed those statistics for someone who gets curious, not to compare with another drone.

Top 10 Most Powerful Rocket in the World