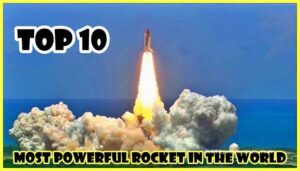 Top 10 Most Powerful Rocket in the World

Here is the list of the Top 10 Most Powerful Rocket in the World, ⭐⭐⭐⭐⭐ All types of rockets are still our only means of reaching space, but how do they work? For centuries, writers and inventors have fantasized about exploring the universe beyond Earth, but the true challenges of space travel were only realized in the nineteenth century. A rocket generates thrust by a controlled explosion in which the fuel and oxidant undergo a violent chemical reaction, and the expanding gases are pushed out the back of the rocket through a nozzle or exhaust.

The nozzle is a specially shaped exhaust that channels the hot high-pressure gas created by combustion into steam that escapes from the back of the nozzle at hypersonic speeds exceeding 5 times the speed of sound. In today’s article, we’ve ranked the ten most powerful rockets in the world by payload capacity.

Here is the Top 10 Most Powerful Rocket in the World

Rockets are the means of reaching far-flung destinations such as the Moon and Mars. They are high-tech, efficient machines that are specifically built to transport individuals and equipment to space in order for astronauts and specialists to execute space missions. Since the invention of the rocket, NASA and other space organizations have developed some of the world’s largest and most powerful rockets.

The Falcon Heavy rocket, according to SpaceX, is the most powerful rocket in use today. The 20-story super-heavy rocket with three propellers is humanity’s largest and most astonishing creation. It boasts numerous outstanding statistics and characteristics, making it the best in the world. Let’s take a peek at some of the list’s most powerful rockets.

In 2011, ARES 1 was decommissioned. NASA planned to launch Orion, a spacecraft intended for NASA human space flight missions, using ARES 1. The ARES 1 could carry a payload of up to 56 000 pounds in lower earth orbit. The first stage engine was a solid rocket fuel that could generate a maximum of 3.4 million pounds of thrust, while the second stage could only generate 294 thousand pounds of thrust.

SPACE SHUTTLES were developed by the United States and flew from April 1981 to July 2011 at a height of 184.2 feet in low earth orbit. They had two powerful rocket boosters to launch the machine into space. Between 1981 and 2011, the space shuttle’s Atlantis challenger Columbia discovery and endeavor will launch 135 times.

The DELTA IV HEAVY is the most powerful rocket in the Delta rocket franchise family, created in the United States. The enormous rocket can transport a payload of 22,000 pounds to the moon or a full payload of 17 600 pounds to Mars transfer orbit. In August 2018, the rocket launched the Parker solar probe beyond Earth’s orbit on a research mission. The rocket, which stands at a height of 236 feet, has been in use since January 2004. The delta iv can carry a maximum payload of 63,470 pounds.

The NEW GLENN rocket was conceived in the United States and is currently in the development phase. It will stand between 230 and 322 feet tall and can carry a payload of between 100 000 and 140 000 pounds in lower earth orbit. The first stage of the rocket can produce a massive 3.85 million pounds of thrust to propel the machine to space. The new Glen, like the new shepherd falcon 9 and falcon heavy rockets, is a reusable rocket.

It’s a huge step forward for SpaceX’s long-term ambition of creating a base on Mars. The rocket stands 230 feet tall and is propelled by 27 merlin 1d engines. The three boosters of the rocket can individually create 1.7 million pounds of thrust, allowing the machine to reach space. The rocket has been in orbit since February 2018 and has a payload capacity of 140,700 pounds.

The starship rocket, which was envisioned in the United States, is currently in development. The rocket rises around 394 feet tall and has a payload capacity of 000 220.000 into lower earth orbit. The gigantic launch vehicle and spacecraft are specifically meant to deliver people to Mars. The rocket is a key part of SpaceX’s plans to build a primitive base on Mars.

The US-built SPACE LAUNCH SYSTEM measures 365 feet tall and can launch a maximum payload of 290,000 pounds into Earth’s orbit. It is currently being constructed for NASA’s famous Orion program. The Orion spacecraft is designed to take astronauts to the moon and Mars. To achieve the block 2 configuration, NASA plans to deploy improved boosters that are also in development. The SLS Block 2 configurations will provide 9.5 million pounds of thrust.

Long March is a Chinese rocket that is currently in the development stage. It will stand 338 feet tall and have a diameter of up to 31 feet broad. Its total mass will be up to 4405 US tonnes, and it will be able to transport a maximum payload of over 310 000 pounds in lower earth orbit. The new, more powerful, and heavier Long March 9 is still under development and won’t be available until 2028. Long March 9 will be a four-stage rocket with a total thrust of around 2.55 million pounds, despite its failure development and launch.

The United States constructed the SATURN V, which was discontinued in 1973. The rocket was a notable rocket that was used for several apollo moon missions, including the 1969 apollo 11 mission, and it was launched successfully 13 times from the Kennedy space center. In 1973, the SATURN V also launched Skylab into orbit. From November 1967 to May 1973, the SATURN V was 363 feet tall and flew. It can lift a payload weighing up to 310 000 pounds into Earth’s orbit, making it one among the world’s top ten most powerful rockets. this is the Most Powerful Rocket in the world.

So, this is the list of the Top 10 Most Powerful Rocket in the World, Thanks for watching.