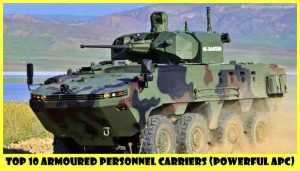 Here is the list of Top 10 Armoured Personnel Carriers, Transporting military troops from base to battlefield is a difficult task, which is why the armored personnel carrier was invented. These military vehicles are designed to transport military troops and their equipment to combat zones. They provide troops with protection and are extremely useful even in harsh terrains. APCs have become a common sight in battle zones, with new technology and improved research leading to improvements in their characteristics and capabilities. so let’s jump right into the Top 10 Best Armoured Personnel Carriers.

The btr-80 2a is a Russian military industrial company’s upgraded 8 into 8 wheeled armored personnel carrier designed for use by Russia’s and Kazakhstan’s army. It is an updated variant of the BTR-80 series of vehicles. The APC’s armored hull is built of Kevlar laminated synthetic material for ballistic protection, and it is also equipped with an overpressure nuclear, biological, and chemical protection system. It measures 7.65 meters in length and weighs 15.4 tons.

It is powered by a commas 740 turbo diesel engine that produces 300 horsepower, allowing it to travel at speeds of up to 100 kilometers per hour on the road. The APC’s main armament is a 30-millimeter dual feet automatic cannon, and its secondary armament is a 7.62 millimeter PK tmco coaxial machine gun.

This vehicle is an amphibious Aden armored personnel carrier designed in Ukraine by Kharkiv Morozov machine building design. It incorporates advanced modular armor protection that can provide protection against small arms fire and mine blasts. It can, however, be enhanced to provide immunity against 30-millimeter gun rounds, and it can be operated in all climatic conditions during the day and night. The btr-4 M v1 has a length of 7.7 meters and weighs 17.5 tonnes. It is powered by a kmb d3 TD two-stroke diesel engine with a maximum output of 500 horsepower.

This is an st kinetics-built armoured personnel carrier in service with the Singapore Armed Forces. It has excellent mobility and survivability. Tarek’s is driven by a caterpillar c9 turbocharged diesel engine and has an independent suspension system that allows ground mobility and comfort over even the roughest terrain. The APC is equipped with active and passive armor suites and can guard against IEDs and mines. It is 7.78 meters long and weighs 24 tonnes, with a maximum range and speed of 600 kilometers and 105 kilometers per hour, respectively. Tarek has a remote control weapon system with two weapons. It also has a 40mm automatic grenade launcher, a 12.7mm heavy machine gun, and up to two aware general-purpose machine guns, as well as a 7.62mm Jeff general-purpose machine gun.

The vehicle was designed for the Malaysian Armed Forces based on FN SS’s pars help into assistance APC vehicles that are now in service with the Turkish army. It can carry 13 men and is equipped with composite aluminum and steel armor.

The Parrs is currently powered by a Duds engine that produces 523 horsepower and measures eight meters in length and weighs around 28 tonnes with the dots engine. It has a maximum range of 700 kilometers and a top speed of 100 kilometers. It is armed with two soldiers and an L LTV 30 turret with a 30 millimeter TO 30 cannon and an FN Herstal mag 58 m coaxial 7.62-millimeter machine gun.

This is an amphibious wheeled armored combat vehicle designed by Auto Car, a Turkish firm. The vehicle is modular, allowing for multi-wheel configurations and great ballistic and mine protection thanks to its high hardness. steel monocoque hull

The armored aid into the eighth vehicle provides ballistic protection against kinetic energy projectiles and fragments, as well as mines, rocket-propelled grenades, and explosively formed penetrators. It is powered by an 8.9 litter water-cooled turbocharged diesel engine and measures 7.8 two meters in length and weighs 24 tons. The armored 8 into 8 has a maximum range of 700 kilometers and a top speed of 155 kilometers per hour on the road, allowing for the integration of multiple weapon systems. Depending on the weapon station, high-caliber weaponry such as 7.62 millimeter, 12.7 millimeters, fourteen point five millimeters, and twenty-millimeter machine guns and grenade launchers can also be fitted on the vehicle.

It was designed as a private initiative by an Austrian business and is integrated with modular scalable armored solutions for protection against ballistic threats, mines, IEDs, and rocket-propelled grenades.

The ponder 2 is powered by a cuman c350 diesel engine that produces 285 horsepower. It is 6.5 meters in length and weighs only 12 tons. The vehicle has a maximum range of 600 kilometers and a top speed of 100 kilometers per hour. The Pinder 2 is equipped with a Mauser 30mm MK 32 cannon as well as 7.62mm machine guns and 76mm smoke grenade launchers as secondary armament.

The boomerang k16 is a modular and phoebius armoured personnel carrier being developed by a Russian military industrial company for the Russian army. The boomerang k16 integrates bolt-on ceramic armor that offers all-around protection so far its protection level is classified, but it appears that all-around protection with maximum armor is against 14-point five-millimeter armor-piercing rounds and artillery fragments from 152-millimeter rounds.

It’s roughly eight meters long and weighs around 20 tons, and it’s propelled by a 510 horsepower four-stroke turbocharged diesel engine. The APC has a range of 800 kilometers and a top speed of 100 kilometers per hour. A sensor array, a 12.7-millimeter machine gun, and a 7.62-millimeter coaxial machine gun are mounted on the vehicle’s remotely operated turret.

This is a variation of the Moak Piranha family of vehicles from the fifth generation. It was designed by General Dynamics European Land Systems and has standard armor of roughly fourteen points. It has a length of 8 meters and weighs around 33 tons and has five millimeter AP protection on the back and 20 millimeters 223 millimeter AP on the front. It can provide full protection for the crew if a 10-kilogram explosive mine explodes under the hull.

The carrier can be armed with modular weapon platforms ranging from remotely controlled light weapon stations to heavy turret or gun systems such as the last 30-millimeter modular turrets system, which produces 430 kilowatts of power and provides a maximum range of 550 kilometers and a speed of hundred kilometers per hour. A 12-point 7-millimeter machine gun is also mounted on it.

the fighter The APC is an armored personnel carrier developed by a joint venture between Krauss-Maffei Wegmann and Rheinmetall for the German army. It is designed to defend soldiers from mines, IEDs, and ballistic threats. It shields the crew from anti-tank and anti-tank weapons, and it has an Allison automatic transmission with a permanent eight-wheel drive.

The boxer armored personnel carrier is seven meters long and weighs 36 kilograms. It has a range of 1,500 kilometers and a top speed of 103 kilometers per hour. It is equipped with a 12.7-millimeter heavy machine gun or a 40-millimeter automatic grenade launcher. A 7.62mm machine gun is included in the secondary armament.

The Patria AMV is a multi-role military vehicle built by the Patria defense firm in Finland. The AMV’s key feature is its modular architecture, which allows multiple turrets, weapons sensors, and communication systems to be installed on the same carriage. The AMV has a 30-millimeter protection level. Another essential element of the APFSDS frontal arc is its excellent mobility, which combines speed agility, and real comfort.

It measures 7.75 meters in length and weighs 16 to 26 tons. The vehicle’s dual power di 12 Scania diesel engine produces 360 kilowatts, providing an operating range of 800 kilometers and a top speed of more than 100 kilometers per hour. The Patria AMV is equipped with a Patriot PML 127 OWS turret that houses a 12.7mm heavy machine gun and a 7.62mm macro axle machine gun as secondary armament.