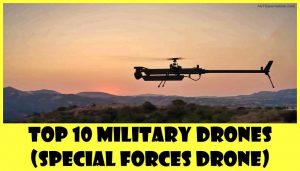 Today in this article we will give you full info related to the Top 10 Military Drones (Special Forces drone), Elite military units deploy outstanding modern drones with unique capabilities to undertake special operations throughout the day or night, such as surveillance or reconnaissance missions in a variety of conditions. These are the world’s ten most advanced special forces military drones.

It’s a tough and adaptable drone that can undertake observation missions on land or water. Its inflatable structure enables it to function in a variety of conditions, including the sea, jungle, and desert.

It is 55 centimeters long, 19 centimeters tall, and weighs less than two kilos. It can be deployed in under a minute and is easily repairable. It has a range of more than 23 minutes and can reach a maximum speed of 60 kilometers per hour. It can withstand winds of up to 46 kilometers per hour and has a transmission distance of 2 kilometers.

It is a versatile and stealthy drone designed to conduct intelligence surveillance or reconnaissance tasks. It is tiny enough to be carried and operated by a single person.

It has an artificial intelligence system that allows it to operate autonomously in both air and ground modes, as well as avoid obstructions. It weighs 6.8 kilos and has a flying autonomy of 20 minutes or 4 hours on the ground. It can carry a 4-kilogram load and retains data for future processing, including videos, 3D maps, and location information.

It is a durable and reliable drone that can be used for a variety of missions including surveillance, patrol, and search and rescue. It contains recharging kits that allow its batteries to be replenished during long missions in isolated locations.

It’s 102 centimeters long, 24 cm tall, and 2.4 kilos heavy. It can transmit thermal photos and work independently, reaching a top speed of 50 km/h and flying at a height of 4 500 meters. It can withstand wind speeds of up to 90 km/h and has a transmission range of 5 kilometers.

It’s a high-performance drone built for the toughest missions. Its control system allows it to plan and simulate flights and can be set up to carry out missions autonomously.

It is a rugged and resistant drone built for expeditionary missions. Its single rotor design allows for precision vertical takeoff and landing in restricted locations. It can be transported and unfolded in less than three minutes and weighs 16 kilos.

It has a range of 60 minutes or 100 kilometers and can fly at an altitude of 3600 meters. It features artificial intelligence and can execute autonomous group flights for surveillance or reconnaissance operations. It is waterproof and weatherproof and can fly safely in a variety of environments.

It’s a versatile, quiet drone that may be utilized in a variety of settings. It contains an encrypted communication system and artificial intelligence systems that allow it to avoid obstructions while also providing thermal imagery.

It’s a small, silent drone meant to carry out clandestine missions with the highest level of security. This airborne personal reconnaissance device for foot soldiers feeds high-resolution photos to the operator, providing quick and hidden situational information to the soldier.

It has the ability to fly automatically and detect without being seen. It is 16 centimeters long and weighs 33 grams. It has a range of up to 25 minutes and can achieve speeds of 21 kilometers per hour. It can withstand winds of up to 37 kilometers per hour and has a transmission distance of two kilometers.

It is a compact and durable drone designed to execute tactical reconnaissance missions indoors. It allows you to swiftly and accurately assess a situation and make precise decisions. It has a night vision camera and a sophisticated positioning system.

It weighs 380 grams and measures 24 centimeters in length by 9 centimeters in height. Its reinforced structure is impact resistant, and it has a 15-minute autonomy. You can position a camera and microphone wherever to collect data, and it has been utilized by over 1000 tactical teams throughout the world to accomplish a variety of operations.

It is a versatile tactical drone with night and infrared vision that can fly autonomously during the day or at night. It measures 56 centimeters in length and weighs 1.8 kilograms.

It includes a sophisticated object tracking technology that allows you to track and follow while maintaining a safe distance; it has a laser illumination that can only be seen with night vision goggles and allows remote identification of items of interest, and it has a range of 35 minutes.

It is a tough and portable drone that can work fast and safely during the day or night. It is 66 centimeters in length by 21 centimeters in height and weighs 1.3 kilos.

It has night and thermal vision, as well as artificial intelligence, so it can work independently and scan complicated things like buildings. Its structure is exceptionally durable, with a range of 35 minutes and a transmission distance of up to 10 kilometers. It can avoid obstacles even in tough situations.