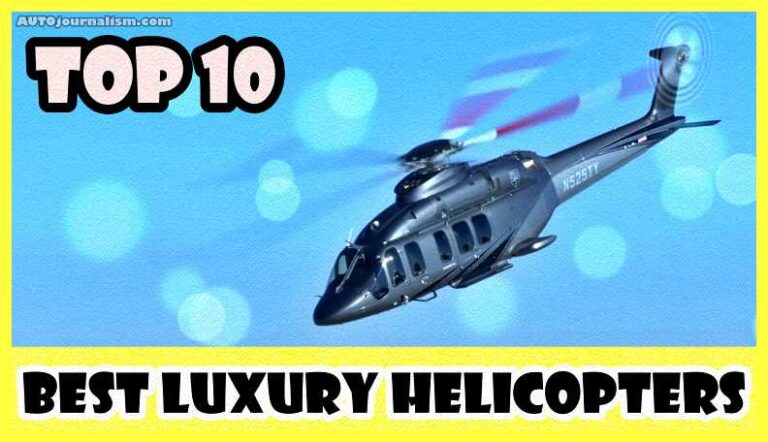 Flying a business chat provides the utmost freedom of travel across the world, but what about those times when billionaires, like the rest of us, are stopped in traffic? True VIP levels of luxury can only be obtained by leaping over highways and landing anywhere you wish in a personal helicopter.

this Airbus medium utility helicopter gained its flying certification in July 2020, both the normal and the deluxe versions of the craft should begin customer deliveries in the near future. In the case of the Ach-160, the model is equipped with two saffron Hirano engine plants that provide up to 1300 horsepower and push it to a maximum cruise speed of 155 knots. The cabin is totally customizable, with options such as sofa sets, individual lounge chairs, or a combination of both, and was built in collaboration with the yacht designer studio Harrison aids cart.

The interior is decorated with wood veneers and lined with a handmade carpet that is upholstered and lathed. The cockpit is equipped with the current edition of x3 avionics, which greatly reduces the amount of labor for the crew. Each passenger seat has a button that activates the outside stairs for quicker boarding.

This twin-engine helicopter was developed in collaboration with Korea Aerospace Industries and was originally intended to be used for emergency medical services. As a result, the model features an all-new modular affordable product line airframe design and a stretched cabin that makes it ideal for corporate and private use. It has enough room in the back for up to six passengers, plus one more seat near the pilot. The propulsion tank is borrowed from Bell’s previous 427 helicopters, but it has been substantially updated. A pair of Pratt and Whitney turboshaft engines propel the aircraft forward, driving a four-bladed rotor system.

On a full tank, it can cruise at 150 mph and reach up to 411 nautical miles. This bell is certified for single-person operation and comes with wheeled landing gear as well as Garmin avionics with satellite guidance.

This 15 passenger medium-lift helicopter was developed in collaboration between Augusta Westland and Bell Helicopters, and it first flew in 2003. During its years of service, the model became one of the brand’s most successful and influential products, and it is still manufactured under Leonardo’s management today. The AW139 is a popular choice among individual and corporate owners since it boasts one of the largest cabins in its class, with plenty of passenger room and a separate luggage compartment.

The chopper’s broad hinge doors and a strong retractable step make it easier to get inside. Several arrangement possibilities are available in the state-of-the-art interior. There are leather seats, climate control, a minibar, reading lights, and a private and cabin communication system, all of which can be fully customized at the customer’s request. Leonardo is powered by a pair of pratt and Whitney Canada turboshaft engines, as well as the main rotor with five composite blades and a titanium hub.

The airbus ach145, formerly known as the ec145, has been in service since 2002 and was the first model of the new Airbus corporate helicopters division in 2011. It is typically powered by two saffron aerial 2e engines and a four-blade rotor system, and in 2019, the h145 debuted with an all-new blue edge 5 plate rotor that allows for a 330-pound payload capacity increase to 4200 pounds.

The ach-145 is currently available in two distinct interior designs: the ach line and the Mercedes-Benz style. In total, they offer ten different layouts that can accommodate anywhere from four to eight passengers. There are individual seats for each passenger, a real wooden floor, sophisticated carpets, and plenty of storage. On the technology front, the model comes standard with onboard wifi, modern infotainment, and a new Helionx flight deck with an intelligent human-machine interface.

S92 Sikorsky This twin ancient medium-lift helicopter was designed for military and civil aviation purposes from the Sikorsky S70. It has an aluminum airframe with some composite components. In the utility transport duty, the Sikorsky s92 can carry 22 personnel thanks to its four-bladed fully articulated composite main rotor plate, which is powered by twin General Electric turboshaft engines with 5000 horsepower output.

While the executive layouts are designed for 10 to 14 passengers, the cabin is equipped with silencer acoustics and premium floor, wall, and ceiling finishes, as well as an active vibration control system, wi-fi, and an entertainment system. It is also worth noting that a modification of this helicopter known as the vh92 will be replacing the aging fleet of vh3c kings as marine 1 us presidential transport in total 23 units will be produced at a cost of 205 million each,

Due to Aston martin Leganza’s ongoing search for new methods to revitalize its brands, the company has formed a tight partnership with Airbus corporate helicopters. Four interior and exterior concepts for the Ach-130 AVAP variant of a single-engine light utility helicopter h-130 were created as a consequence of the collaboration. The first aircraft was painted in a sterling green scheme with a painted gradient that fades into jet black on the underside of the helicopter and Skyfall silver around the cowlings.

Other Aston martin unique colors, such as xenon grey Arizona or ultramarine black, are included in the remaining deliveries. The automotive-inspired cabin is made of Crumpton pure black ultra-suede with a palette of customizable letters that includes oxford 10 pure black cornbread and ivory, and the chairs have the same broken detailing as the Atb-11.

This medium-lift helicopter has been in development since 2012, and despite a number of early setbacks, including a prototype crash that killed two of the aircraft’s pilots, the aircraft is now 90 percent complete and ready for production. The 525 features a composite body with standard modifications and is powered by two General Electric turboshaft engines. The model also includes a triple-redundant fly-by-wire cockpit and Garmin g5000h avionics. This belt can be adjusted to provide the most luxurious experience possible.

It comes with huge swivel seats, leather upholstery with contrast stitching, and ambient lighting. Flares can use the onboard wifi to gain uninterrupted internet access, and the interior surroundings can be controlled by a smartphone. Finally, if the maximum 20 passenger seating capacity is not required, customers can pick from a variety of conference-style and comfort configurations, including one developed by the Macaire Aviation Group.

The seven-ton class medium utility helicopter entered service in 2014 as a multi-purpose aircraft capable of performing a variety of missions, including public safety. Vap transportation, as well as rescue operations and emergency medical services The aircraft is powered by two Pratt and Whitney Canada turboprop engines, each producing 1776 shaft horsepower and allowing for a cruise speed of 160 knots and a maximum range of 590 nautical miles for the premium market.

The h-175 is designated as Ach, and it has a few unique cabin configurations ranging from 6 to 12 seats, as well as panoramic windows with electrochromic dimming for all passengers. To give all passengers genuine jet light comfort, the interior also has a small galley upfront, mood lighting, individual climate control, and an in-flight LCD entertainment system. The ach175 has improved soundproofing and anti-vibration features, allowing for hands-free communication even at high cruise speeds.

The s tilt-rotor aircraft is in a class of its own. It is investigating a new concept of ap air travel that combines the speed range and altitude of a fixed-wing turboprop airplane with the vertical take-off and landing versatility of a helicopter, which is currently being developed by the Italian Leonardo. This v2 well harnesses the power of two pratts and Whitney Canada turboshaft engines, each driving a three-plated prop rotor capable of reaching 275 knots at a maximum height of 25, 000 feet. The distilled rotor flies above any severe weather circumstances.

Thanks to an innovative synthetic vision system and a retractable steerable landing light, it could be operated at any time of day or night. The Leonardo AW-609 offers a soundproof, pressurized private jet cabin with seating for up to 8 guests, as well as a refreshment center and a bathroom.

The s76 has been setting the standard for personal luxury transportation for more than three decades, with more than 7 million flight hours under its belt. The 76d is its latest configuration, powered by the new bw210s twin turbines, which provide increased horsepower without affecting fuel consumption. As a result, flight endurance increases to three hours, and the helicopter achieves an outstanding power to weight ratio and class-leading fuel burn. Sikorsky’s dynamic vibration management and quiet zone transmission technology provide cabin serenity.

Despite its great records, the Sikorsky s76b was involved in the deadly crash of Kobe Bryant, his daughter, and seven other people in 2020. The investigation is ongoing, but there is no indication that any of the aircraft system problems were to blame for the disaster at this time.

Even the main players in the VTOL game are paying attention to the rapid rise of passenger quadcopters. In the case of the bell, they plan to begin testing a full family of nexus aircraft by 2023. This future uber air taxi will feature a variety of applications and passenger capacities, including two four and six ducted fan types that can transport up to four passengers. The Nexus is propelled by a hybrid-electric powertrain.

Based on the data for the largest rotorcraft Bellar aiming for 155 knots top speed with a maximum range of 130 nautical miles for this project bell partnered with a number of companies including saffron MOOC garment fails and eps which help it in the development of hardware and software which one is the most impressive luxury helicopter in existence share your preferences in the comments below.