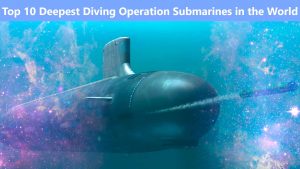 Submarines float on the surface by using air-filled ballast tanks, which have valves at the top that open when it’s time for the submarine to submerge. So, how deep can a military submarine dive? Today, we’ll present you with the top 10 deepest diving operational submarines in the world.

The French navy’s TRIUMPHANT CLASS ballistic missile submarine, also known as the next-generation device-launching nuclear submarine, provides the ocean-based portion of France’s nuclear deterrence strike force. The submarine’s propulsion system is a nuclear turbo-electric system based on a type 15 pressure water reactor that produces 150 megawatts of power. The submarine’s submerged displacement is 14 335 tonnes, and it has a test depth of more than 400 meters.

The BOREI CLASS is a Russian navy nuclear-powered ballistic missile submarine built by self-mash. It’s a fourth-generation nuclear missile submarine with a lower sonar detection rate than its predecessor. A pump-jet propulsion system, which is also operated by an ok 650 nuclear reactor and an AEU steam turbine, is another advancement. It is the first aircraft in Russia to use a pump jet propulsion system.

The ASEAN class, also known as the YASEN CLASS, is a nuclear-powered cruise missile submarine designed by Malakit and built for the Russian navy by Self mash. Based on the Akula and Alpha class designs, the ASEAN class is expected to replace the Russian navy’s current soviet-era nuclear attack submarines. It is powered by ok 650 kpm pressurized water reactor turbines or 43,000 shaft horsepower.

CLASS AKULA Has a 450-meter measurement theft The Akula class is a nuclear-powered attack submarine that was first deployed by the Soviet navy in 1986. It’s one of the world’s seven operating deep-diving submarines. A 190-megawatt vm5 pressure water reactor and a gt38 turbine form the main machinery, with two auxiliary types of diesel rated at 750 horsepower providing emergency control. A seven-bladed fixed-pitch propeller with a test depth of 480 meters is driven by the submarine’s propulsion system.

The SEAWOLF CLASS is a nuclear-powered fast attack submarine class currently in service with the US Navy. A GE pwr s6w Best reactor system powers the nuclear-powered sea wolf. Thanks to two 52,000 horsepower engines, a pump jet propulsor, a single shaft, and one secondary propulsion submerged engine, the seawolf class submarine are capable of a test theft of 490 meters.

TYPE 209 – A German diesel-electric attack submarine that has been exported to 13 countries, with 61 submarines built and commissioned between 1971 and 2008. This submarine’s test depth is the same as the previous one, at 490 meters, and its propulsion consists of diesel-electric or diesel with a single shaft and 6,100 shaft horsepower.

The VANGUARD CLASS is a nuclear-powered ballistic missile submarine in the Royal Navy. The pwr2, a new pressurised water reactor from Rolls-Royce, was created specifically for the vanguard class. The reactor drives two GEC steam turbines connected to a single shaft pump-jet propulsor, giving the submarine a maximum submerged speed of over 25 knots. They are the largest submarines ever built in the UK, displacing 15,900 tonnes while submerged.

SIERRA CLASS – A nuclear-powered attack submarine that was designed for the Soviet navy and is now in Russian service. The class is distinguished by its light and heavy titanium pressure hull, which allows the submarines to dive to greater depths, minimize radiated noise and improve torpedo resistance. The sierra class has a test theft of around 520 meters and is operated by a single ok 650 pressurized water reactor.

TYPE 039A CLASS, also known as the yuan class, is a diesel-electric submarine class built for the Chinese People’s Liberation Army Navy. According to an early assessment by the US Naval Institute, it is China’s first air-independent propulsion-powered submarine and is expected to be one of the quietest diesel-electric submarine classes in service. The Yuan class was created primarily as an anti-ship cruise missile platform capable of staying submerged for extended periods of time in difficult-to-reach shallow littoral areas. The calculation goes down to a depth of 550 meters.

The OSCAR CLASS is the world’s deepest diving operating submarine today. It’s a nuclear-powered cruise missile submarine that was originally designed for the Soviet navy but is now in Russian service. The Oscar class’s test depth is 830 meters, with some of the vessels expected to be modernized as part of Project 949 am to expand their service life and improve fighting capabilities.

Top 10 Biggest Ships in The World – ( Bigger than Titanic )