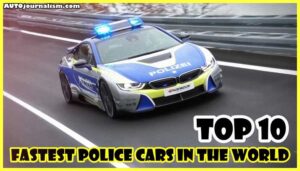 Here are the Top 10 Fastest Police Cars in the World – Amazing police vehicles with great power which can reach speeds of over 180 miles per hour and are used to patrol the streets in cities around the world.

I’ve always been fascinated by the vehicles that police officers use while they’re out on the streets pursuing down criminals. If you watch a lot of Hollywood movies, you’ll notice that when cops are after a bad man, they make the most insane road moves. The cars sometimes fly over one another, flip, and even catch fire, but at the end of the day, police cars keep up with the bad guys’ automobiles and then start shooting at each other, which is crazy stuff, these are the 10 fastest police cars in the world or top 10 best police vehicle.

The police department of Dubai, United Arab Emirates, has a Chevrolet Camaro that is equipped with computer communication systems and police illumination and is employed as a high-performance patrol car. It features a 6.2-liter engine that produces 426 horsepower and 418 pounds of torque.

It has a top speed of 155 mph and can accelerate from zero to 60 mph in just 4.7 seconds. Dubai police are constantly looking for methods to improve their vehicles in order to meet safety and security requirements.

In 2017, police in Australia unveiled the Guardian v2, a new vehicle with a 3-liter engine that produces 395 horsepower and 383 foot-pounds of torque. It was transferred to the police department to be employed as a patrol car in highway operations.

Top Speeds: 155 miles per hour
It has a top speed of 155 miles per hour and can accelerate from 0 to 60 miles per hour in just 4.6 seconds. It’s suitable for quick response duties because of its excellent stability and traction even in slick conditions. The Victoria Police Department is always testing new security technologies for use in patrol cars.

The German Automobile Tuners Association chose local preparer ac Schnitzer to alter this hybrid car for police usage in 2018. The German tuner improved the vehicle’s appearance and performance on the inside and out.

Top Speeds: 155 miles per hour
The automobile features a 1.5-liter engine that produces 231 horsepower and 236 foot-pounds of torque and can accelerate from zero to 60 miles per hour in 4.4 seconds. This vehicle has been utilized by German police on the track and in other events to demonstrate the improvements made as a result of the modifications.

The Los Angeles Police Department has a Tesla Model S patrol car, which was put into service in 2019 in the Hollywood division as part of a program aimed at reducing carbon emissions.

Top Speeds: 155 miles per hour
This electric vehicle has a top speed of 155 mph and can accelerate from zero to 60 mph in 2.5 seconds. It has a range of 370 miles and other equipment has been added to adapt it for police use. Today, more and more police departments are employing Tesla vehicles as patrol cars.

Since 2017, the Norfolk County Police Department in England has owned a Porsche Cayman GT4. A group that promotes the growth of the country’s youngsters gave the automobile.

Top Speeds: 186 miles per hour
The automobile features a 3.8-liter engine that produces 385 horsepower and 310 foot-pounds of torque and can go from zero to 60 miles per hour in 4.4 seconds. This vehicle has been used to interact with young people and promote awareness about the need for road safety at events relating to the automotive industry and study centers.

The Takagi Prefecture Police Department in Japan debuted a Nissan GT-R in 2018. The vehicle was donated by a local citizen and presented at a special ceremony. It has a 3.8-liter engine with 570 horsepower and 466 foot-pounds of torque. It can reach a top speed of 195 miles per hour and can accelerate from zero to 60 miles per hour in 3.5 seconds.

Top Speeds: 195 miles per hour
An emergency lighting system, sirens, and a loudspeaker have been added to the vehicle. This patrol car is frequently used at other events to encourage traffic safety awareness.

The Florida Sheriff’s Department has a new patrol car that has been seized and modified with programmable police lights, sirens, and a radio system. The car has two keys. The red one allows for 707 horsepower, while the black one restricts the engine to 500.

Top Speeds: 168 mph (tire limited)
This vehicle has a top speed of 200 mph and can accelerate from 0 to 60 mph in 3.4 seconds. In addition to serving as a patrol car, it also serves as a public relations vehicle for the Marion County Sheriff’s Department.

Top Speeds: 202 mph
These vehicles are utilized for highway operations as well as medical services like organ transport. Both trucks are equipped with specialized equipment such as computers, cameras, and defibrillators.

Since 2015, the Abu Dhabi Police Department in the United Arab Emirates has had a Lycan Hypersport. The interior of the car is luxurious, and it has been tailored for the police with police illumination and other characteristics. It has a 3.8-liter engine that produces 740 horsepower and 708 lb-ft of torque.

The Dubai police force’s arsenal of high-end sports vehicles includes an astonishing Bugatti Veyron, which can achieve speeds of over 250 miles per hour and is considered the world’s fastest police car. It has a 1000 horsepower motor and can accelerate from 0 to 60 miles per hour in 2.5 seconds. It has set records in previous years and is employed by the Dubai police to be nice to tourists.

Top 10 Most Expensive Helicopter In The World