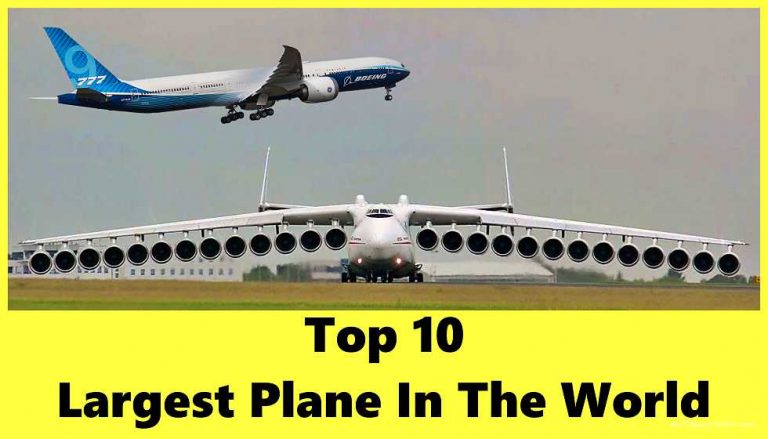 Here is the list of the Top 10 Largest Plane In The World, We’ve compiled a top ten list of the world’s largest airplanes, which includes military, commercial, and other aircraft. There are several ways to measure large aircraft, including length, weight, payload capacity, volume, and wingspan. We’ll look at all of these, but keep in mind that others could easily make the list.

Boeing c17 number ten The c-5 galaxy is the largest military plane in the United States, but the c-17 globe master is the main workhorse. The aircraft first flew in 1991, and 279 globe masters have been built since then. The c-17 air-lifter has an 85.5-ton payload capacity and can fly missions all over the world transporting troops and cargo, performing airlifts and medical evacuations, and flying airdrop routes.

Boeing 747 shuttle carrier number nine Boeing has produced over 1500 Boeing 747s, which have served as the world’s largest passenger and cargo aircraft, a military command center in the sky called air force one, and a space shuttle lifter for NASA. Iron Maiden also has one called air force one. Airlines are phasing out the aircraft in favor of a single-aisle design that can now fly with enough range to cross oceans.

The Boeing 747, as the only mass-produced four-engine jumbo jet in the United States, has some life left in it.

The beluga xl, which was designed in 2014 and flew its first operational flight in 2020 after more than 200 test flights, has officially joined Airbus’ existing massive fleet to transport approved big goods around the world.

The plane is enormous. Its 206-foot length gives it the world’s greatest cross-section of any freight plane.

seventh place The ILYUSHIN IL-76 is a certified workhorse with a 164-foot wingspan that can transport up to 140 troops and maximum cargo of up to 50 tons. It was built to operate in severe conditions and has a maximum payload of up to 50 tons. In 1971, the first ill-76 prototype was unveiled, and three years later, it was put into production.

6. B-52 STRATOFORTRESS (Largest Plane In The World)

The b-52 Stratofortress is the air force’s grandfather, the aging but still capable of delivering a serious punch, capable of carrying 70 000 pounds of weapons ranging from precision-guided conventional bombs to nuclear warheads, while the b2 stealth bomber and b1 supersonic bomber may be retired. The Air Force wants to upgrade the dependable B52’s engines to increase efficiency and range.

The number 5 c5 galaxy is the largest aircraft commonly used by the US military, with a payload capacity of over 135 tons. The c5 has enough cargo room to carry two M1 Abrams tanks, 16 humvees, three Blackhawks, or a variety of other vehicles without the cargo.

The C5 can travel up to 7000 miles without refueling, making it the world’s longest-range combat aircraft.

The Antonov 124, a monster created and produced by the Antonov 124 design bureau, is ranked fourth. The Antonov 124 Ruslan, used by the Russian air force, has been the world’s largest military aircraft for nearly 30 years since its introduction in 1984.

The Antonov 124 was one of the world’s largest and heaviest cargo planes, with an estimated payload capacity of 165 tons, it can carry even more than the C5 Galaxy, however, its range isn’t as long.

3. 747 DREAMLIFTER (Largest Plane In The World)

The Boeing 747 Dreamlifter is ranked third in the world. Boeing needed a cargo plane with a large cargo hold to transport components for the 787 Dreamliner, which has parts made all over the world. The solution was to take its largest plane, the 747, and build a custom cargo hold around it. At 65 000 cubic feet, the Dreamliner has the world’s largest cargo hold.

The four dream lifters Boeing mate use the world’s longest cargo loader and can transport cargoes up to 125 tons, carrying three times the volume of a 747 400f freighter.

Super guppy number two Although a guppy is prey, the mega guppy is a predator. Except for one NASA facility, every organization in the world has scrapped the bloated airplane. The white size of the guppy is ideal for delivering spacecraft and rocket components, according to the US space agency. An inflated fuselage from a Boeing c97 variant of the cargo, which first flew in 1965, was used to build the super guppy. The airbus beluga has essentially replaced the turboprop cargo plane for huge and oddly shaped cargo delivery, but the mega guppy will continue to perplex people in the sky as long as NASA finds a purpose for it.

It has the biggest wingspan of any plane currently flying at 290 feet and has six powerful engines. It also holds the record for total airlifted payload at 559 5580 pounds as well as airlifting single item burden at about eighteen thousand eight hundred and thirty pounds.