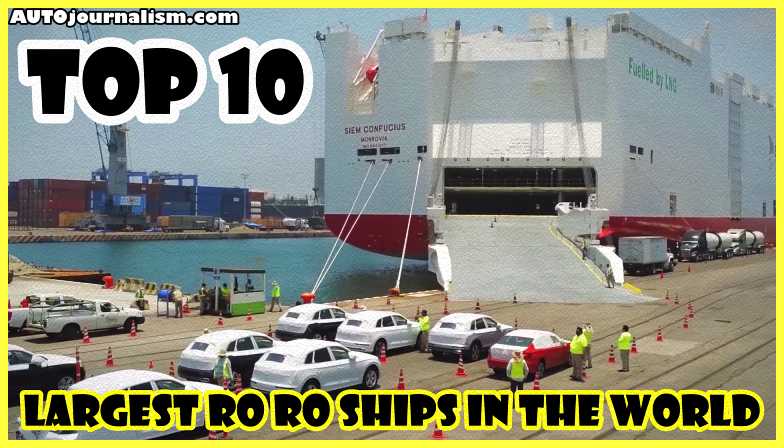 Here are the List of Top 10 Largest Ro Ro Ships in the World – The ten largest railroad ships in the world are outstanding new generation rolling cargo ships used to transport vehicles such as cars, trucks, trains, or industrial machines from manufacturing plants to distribution locations around the world.

Q: What is RoRo in shipping?

The term ‘Roll-on, Roll-off refers to the process of loading and unloading cargo from a vessel. Rather than being hauled onboard by cranes, RoRo allows your merchandise to roll on and off the vessel. Self-propelled vehicles, such as cars and tractors, drive themselves onto and off the ship.

It features rising levels that enable for better utilisation of available space and the accommodating of a larger number of vehicles of various sizes. Using a wide network of international routes, the ucor corporation carries over 3.2 million vehicles every year.

It was built by Mininopon Shipbuilding in Japan in 2018 and sails under the Panamanian flag. Its aerodynamic design decreases wind resistance and its lift levels allow for more space to handle a larger number of cars.

It has sensors and augmented reality technology to improve safety and operation. It measures 656 feet long by 105 feet broad, weighs 63 100 tonnes, and has a load capacity of 15 400 tonnes. Its engine has 17 100 horsepower and can achieve speeds of more than 21 knots.

It is registered under the Marshall Islands flag and was built in a South Korean shipyard by Hyundai Heavy Industries in 2016.

Its dimensions are 656 feet long by 114 feet wide, and it weighs 65 700 tonnes with a load capacity of 19 600 tonnes. Its 17 500 horsepower engine can attain a top speed of 20 knots. This ship is part of a Hyundai Glovis fleet that transports cars, buses, and trains. The corporation has around 60 vessels of all sizes that connect countries all over the world.

It was built by xiaomen’s shipbuilding industry in its China shipyard in 2020 and sails under the Liberian flag. It runs on liquefied natural gas, which cuts carbon dioxide emissions by up to 25%. It has a length of 656 feet and a width of 124 feet.

It weighs 72 900 tonnes and has a load capacity of 19 100 tonnes, which translates to more than 4 800 automobiles. Its two engines have a total output of 16 900 horsepower and can reach a top speed of 16 knots. It is equipped with two gas tanks with a combined capacity of 4700 cubic yards.

It was built at todotsu shipyard in Japan in 2021 and sails under the Japanese flag. It is the first rolling cargo ship of the shipping business k-line to be fueled by liquefied natural gas. It has a length of 656 feet and a width of 121 feet.

It has a weight of 73 500 tonnes and a load capacity of 7,000 tonnes or cars. Its engine produces 12,500 horsepower and can reach a top speed of more than eighteen knots. Its fuel tank has a storage capacity of almost 31,000 cubic yards of liquefied natural gas.

It was built by Xinjiang’s shipbuilding heavy industry at its China shipyard in 2020 and sails under the Swedish flag. It has 13 floors to accommodate various types of freight. It has a length of 656 feet and a width of 121 feet.

It weighs 73 300 tonnes and can carry 23 800 tonnes of cargo, or 7600 automobiles. In 2020, this ship brought 3 600 Tesla Model 3 cars from Shanghai to Belgium in order to assist Tesla with the first shipments of its vehicles built in China.

It was built in xiaomen shipbuilding industry’s China shipyard in 2015 and sails under the Norwegian flag.

It has a total of 14 stages and runs on biofuels, which minimise carbon emissions by up to 90%. It has a length of 656 feet by a width of 118 feet, weighs 76 400 tonnes, and has a load capacity of 22 000 tonnes or 8 500 vehicles. With this vessel, hogato liners established its commitment to a zero-emission future with a 15 700 horsepower engine that can reach a top speed of 19 knots.

It was built in Hyundai Mepo Dockyard’s South Korean shipyard in 2017 and sails under the Maltese flag. It has a length of 767 feet and a width of 114 feet.

It weighs 74 200 tonnes and can carry a load of 27 600 tonnes. Her 28 600 horsepower engine can attain a top speed of 20 knots. It has a crew of 23 people and transports goods like vehicles, trucks, and industrial machinery. This ship transports goods from different parts of Europe, which are then distributed by trains or trucks.

It was built by Jin Ling Shipyard in China in 2019 and sails under the Turkish flag. It has a total of five floors and 22,000 feet of the lane with access through a triple ramp, allowing for quick loading and unloading.

It is a highly efficient vessel that measures 777 feet long by 108 feet broad, weighs sixty thousand four hundred tonnes, and has a cargo capacity of seventeen thousand tonnes. Its two engines have thirty thousand six hundred horsepower and can attain a top speed of 21 knots.

It is fitted with a hybrid propulsion system that achieves 0% in-port emissions using lithium batteries and sails under the Italian flag. It was built by Nanjing Jinling Shipyard in China in 2021.

Its dimensions are 780 feet long by 111 feet wide, and it weighs 67 300 tonnes with a load capacity of 24 000 tonnes. Its 34,000 horsepower engine can reach speeds of more than 20 knots. Currently, the Grimaldi Group has four fifth-generation vessels, including this one, which is the world’s largest and most environmentally friendly.

TOP 10 Stealth Warships In The World