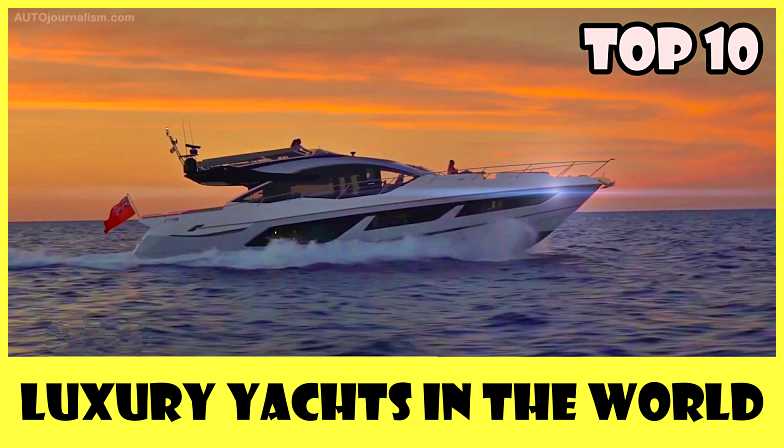 Here is the list of Top 10 Luxury Yachts in the World 2022 and Best Luxury Yachts in the World 2022, Welcome back to the Autojournalism website, it’s time to take a break from the open highways and enjoy the open seas instead. In this article, we’ll explore the world of extremely overpowered speed boats and magnificent luxury yachts that, like supercars, defy any limits and performance in opulence, so as always, let’s put on our finest home garments and enjoy window shopping of the most anticipated yachts in 2022.

The current 730 horsepower strong performance flagship of the AMG GT range designated black series has once again ignited the relationship between Mercedes mg and cigarette racing. This is the 13th product from the alliance, which began in 2007. The Miami company’s superior engineering efforts resulted in a 41-foot speedboat that offers unadulterated performance, sumptuous amenities, and eye-catching style.

The developers achieved an extremely low center of gravity by using a full carbon fiber deck and an all-carbon-fiber hardtop. The cigarette 41 nighthawk AMG black series is the first model in the class to feature five racing great outboard engines, namely the quintet of 450r 4.6 0 v8 from mercury racing, which produces 2250 horsepower and is controlled via an advanced shadowing throttle system. It can reach 78 knots or 90 miles per hour.

The foiler is a 32-foot watercraft with a woody carbon fiber hull and a game-changing flying out technology, based in the United Arab Emirates and national marine manufacturers suiting flamboyant powerboats to please the lavish preferences of local tycoons. The boat’s diesel-electric propulsion system was originally obtained from BMW, however, the newest powertrain configuration is represented by two v8 diesel engines that power the boat’s torpedoes with a combined output of 740 horsepower in cruising settings.

The UK-based luxury yacht-maker continues to rely on turning performance and style to attract new buyers, just as they did with their first yachts launched more than 50 years ago. The newest product to represent Sunseeker’s ideology is the cutting-edge predator 55 Evo. Despite its low profile, the sport cruiser has an aggressive low profile bodywork, a sloped windscreen, a black cabin top, and lots of stainless steel decoration.

The performance-oriented appearance With comfortable seating for you and your Partner ( Special Position Seats for Females for Relax and Comfort ), a wide coffee table beneath the carbon fiber sunroof, and a u-shaped sun lounge on the ford deck, the gas will not be lacking in creature pleasures. The salon also has the sunseeker’s av zoning system, which lets you listen to various music in different places of the yacht. The predator is powered by two Volvo Penta t11 engines, which give strong and responsive handling even at 28 knots cruising speed.

Brabus’s flagship vessel The model has a completely covered all-weather capable cabin with an electronically opening roof seating for seven people and two sliding doors and is a new incarnation this year called the deluxe sports utility vehicle intended for the sea. As is customary for a captain-centered vehicle, the Shadow 900 is outfitted with a new multi-function steering wheel as well as a very advanced electronics package. As with the rest of the family, the dashboard has two 12-inch screens with a Brabus user interface and an intelligent steering module.

The 37 feet can accommodate 12 people and is powered by two 4.6 liter v8 engines with 450 horsepower each, allowing for top speeds of 55 knots depending on your demands. The xc cross cabin may be upgraded with a multi-storage package or a fully fitted aft cabin with a queen bed.

This year, Malibu’s best-selling wake setter series gets a completely rebuilt 25-footer that blends the maneuverability of smaller boats with the luxurious features of bigger ones. The 25 LSV has a completely new weight plus hull is powered by one of the best Malibu Monson engines and has an improved ballast capacity of 5180 pounds that is ready to fill at the stroke of a button.

The model can accommodate up to 18 people and features new expandable lounge seats as well as a multi-view wake bench with a built-in table. The soft grip flooring provides sure footing on board, while the redesigned swim platform with smaller steps and an available power step simplifies getting in and out of the water.

The candela, which bills itself as an altogether new sort of vehicle, combines electric power with an active hydrofoil system. The candela uses knowledge from a fighter jet and airplane construction to make an incredibly light yet robust and strong hull constructed of vacuum-infused carbon fiber.

The single motor produces 74 horsepower and is linked to a 40-kilowatt-hour battery, which can hold up to 50 nautical miles of energy at a cruising speed of 22 knots. To provide a smooth ride, the c7 hydrofoil system is computer-controlled and adjusts 100 times per second. moreover

In shallow water, the propulsion unit is entirely retractable for trailing and storage. The Scandal boat’s systems are all monitored and handled via a 12-inch infotainment screen. The c7 includes a foot table, 12 courtesy lights, a tick deck, underwater illumination, a sunbed, and a cruiser cover.

The 40-year-old Polish manufacturer is a well-known name on the luxury yacht market, with dealerships all over the world. In 2021, it releases the new grand touring outboard series, which will include four models. The 325 GTO, the first and smallest member, is just 33 feet long and gives little yacht luxuries with a deep bowrider seating space, a moveable table, and quality upholstery.

The cockpit includes a huge living space with multiple sofas air conditioning and led lighting throughout to shield the gas from the hot sun the GTO’s roof contains a slide-out awning while the left side has a galley with a fridge canyon stove and a microwave The seat is propelled by a pair of Mercury Verado outboards with capacities ranging from 300 to 450 horsepower; the most powerful version may reach speeds of 45 knots.

Lamborghini has collaborated with the Italian sea group to create a bespoke speed boat kill branded Aztecnomar for Lamborghini 63 the vessel was named after the year of Lambo’s foundation and inspired by the Xi’an FKP-37 hybrid supercar the model weighs 24 tons measures 63 feet in length and falls into the ultra-light boat category but unfortunately, you will not be able to tow it with your Lambo Inside, there are Lambo sports seats plenty of carbon fiber materials car-inspired instruments with stop and start buttons, and two distinct aesthetic alternatives that may be altered using the ad staff program.

The shadow 900 special edition is already available in spyder and Santa body types, each limited to 37 numbered models. Because the boats share the same propulsion components as the previously reported xc crossover cabin, we won’t go into detail about them. However, both versions had greater peak speeds of 16 knots, most likely owing to being somewhat lighter. The black operations models had a distinctive gunmetal grey paint job with a redesigned fairing, gull-wing doors that let you below the deck, and a mercury racing carbon fiber panel kit for the engines. The boats also receive additional customized finishes and interior details, such as bespoke logos and Prabhas distinctive metal stairs.

The Slovenian green line yachts, founded in 2008, are a pioneer of hybrid propulsion technology. In 2020, the firm debuted the fifth version of their drive, which is now available on the all-new 45 coupe boat. This propulsion system consists of two diesel engines, either from Valvo or Myanmar, two electric motors, two electrical generators, and an 80-kilowatt-hour battery to power the ladder, which can still cruise up to 25 nautical miles on electricity alone. and its top speed and diesel mode reach 23 knots it also comes with a massive solar panel array with 2.7-kilowatt output for replenishing up to 15-kilowatt hour on a sunny day the double-decker measures 51 feet in length accommodates up to 6 people overnight and fits a luxury kitchen and a salon on the top-level downstairs you get several bedrooms 2 bathrooms and even a walk-in closet.

Fusing athletic DNA with an extremely roomy interior The 65 sport yacht is fundamentally different from the company’s current lineup in the 60-foot segment, boasting a sleeker exterior profile with extensive use of carbon fiber and polished stainless steel innovative design of the helm station and a modular layout that allows specifying the bridge designs. The 65 has three unsavory cabins that can sleep up to six people. If you prefer to carry the tenter on the bathing platform, the abandoned space may be transformed into a beach club area with an integrated bar barbeque and freestanding seats on the open water. The 65 sports yacht has a top speed of 35 knots and a range of 650 nautical miles.