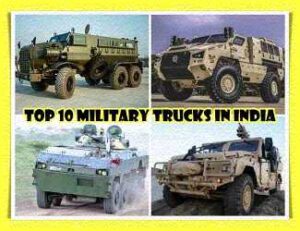 Here is the list of Top 10 Military Trucks In India, To secure the country, the Indian Army is equipped with powerful and durable military trucks. In this article, we’ll inform you about the top ten military trucks made in India.

The Indian military is equipped with cutting-edge technology such as missiles, tanks, and other battlefield supplies. Military trucks are one of their most powerful pieces of equipment. The Top 10 Heavy Military Trucks Made in India are listed below.

Tata Motors Defence Solutions collaborated with Supacat of the United Kingdom to design the Tata Motors 444 MPV. The truck has a payload-carrying capability of 1500 kgs and a gross vehicle weight of 8000 kgs. This military vehicle is used for troop transportation, border patrolling, urban warfare operations, and convoy protection.

The Super Stallion 88, a powerful model from Ashok Leyland, is a logistics vehicle with a GVW of 14.3 tonnes. The heavy-duty military truck is ideal for transporting freight and is best suited to arid environments. The Super Stallion 808 is a powerful and mobile horse. It has a payload capacity of 12 tonnes, which can be reduced to 10 tonnes over tough terrain. The truck is also equipped with a fleet management system.

Tata Motors’ Light Specialist Vehicle is a versatile alternative that is designed to give maximum performance in a variety of scenarios. The Indian military can use this heavy-duty vehicle as a troop carrier, an ambulance, a communications terminal, and even a counter-insurgency operations vehicle. The truck is equipped with a 3 liter DICOR engine that produces 115 horsepower and 320 Nm of maximum torque.

This Tata Motors-developed armored personnel vehicle is capable of efficiently transporting military and paramilitary forces back and forth. This 14-seater carrier is powered by a turbo-diesel engine that produces 240 horsepower and 925 Nm of torque. For its occupants, the carrier includes ten ports for external combat from inside the vehicle.

The Tata LPTA 715 444 Troop Carrier is a well-known Indian military truck with a tough appearance and dependable performance. Under the hood, this truck is equipped with a Cummins 6BTAA 5.9-20 engine that develops 145 horsepower at 2500 rpm and 500 Nm of torque at 1500 RPM. This type is recognized for being able to handle difficult terrains with ease, having a top speed of 100 kmph. The LPTA 715 44 Troop Carrier has a fuel tank capacity of 200 liters, allowing it to travel great distances with minimal refueling stops.

When it comes to field duty, this Ashok Leyland truck is one of the most active. The 6-cylinder engine in the Super Stallion 66 is connected to a 9-speed manual transmission. This truck’s highest power output is 360 HP at 2200 rpm, while its maximum torque output is 1400 Nm at 1300-1500 rpm. The variant can carry a maximum payload of 14,000 kg and has a 350-liter fuel tank.

The Ashok Leyland Super Stallion 1010 is another superb military truck from the Stallion series. This truck is equipped with a 360 horsepower Neptune engine and a 9-speed manual transmission. This truck’s highest power output is 360 HP at 2200 rpm, while its maximum torque output is 1627 Nm at 1300 RPM. The Super Stallion 1010 has a maximum gasoline tank capacity of 350 liters and can sprint at a top speed of 90 kilometers per hour.

Due to its high performance and endurance, the military uses this powerful Mahindra vehicle extensively. This truck is driven by an 8-cylinder, 4.6-liter engine that produces 304 horsepower at 5500 rpm and 615 Nm of peak torque at 1800-2200 rpm. The Mahindra MEVA Straton APC is equally at home in urban and off-road settings.

The Mahindra Marksman is a light bulletproof truck that is employed by the Indian military. Under the hood, this vehicle boasts a 2.2-liter m-hawk CRDE turbocharged intercooler DI engine coupled to a 5-speed manual transmission. The maximum power produced by this engine is 105 HP at 3800 RPM, and the maximum torque is 228 Nm between 1800 and 2200 RPM. This vehicle has a top speed of 120 kilometers per hour.

So this is the list of Top 10 Military Trucks In India, Thanks for watching.