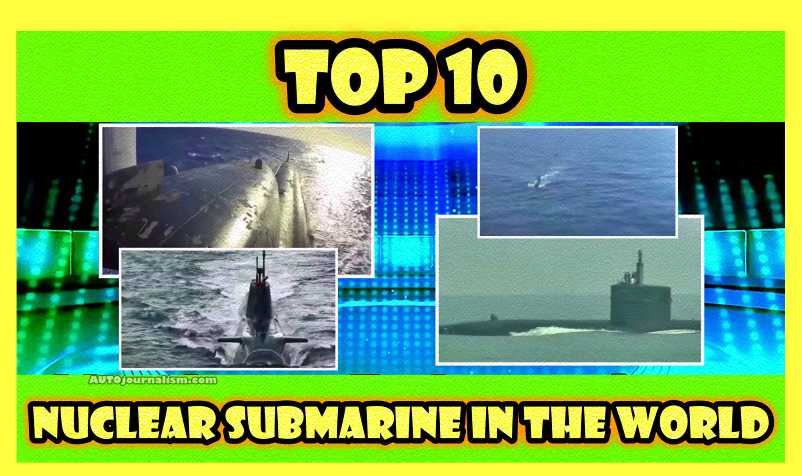 Top 10 Nuclear Submarine in the World

Here is the list of Top 10 Nuclear Submarine in the World, ⭐⭐⭐⭐⭐ Which nuclear submarine is the best in the world, and why? Which modern assault submarine is the greatest and deadly, and why? This article solely contains nuclear-powered attack submarines that are currently in service around the world. boats that are still being constructed or under construction are not included in the top-10 analysis. here are the Top 10 Nuclear Submarine in the World.

This variation contains some changes to the sail with the tapered front intact but all windows removed there is a strange hump found immediately behind the sail which is believed to hold a missile vertical launch mechanism. It was launched in 2012 and commissioned in 2015.

The YJ 18 rocket-propelled torpedo and the CJ 10 land-attack cruise missile are believed to be carried and launched by the VLS. These missiles allow the type 93 B to project power ashore over great distances, a capability not previously possessed by Chinese SSNs.

The first nuclear submarine built in India cost 2.9 billion dollars. The Indian Navy’s dockyard at Visakhapatnam, which is the headquarters of India’s Eastern Naval Command, launched this ship submerged ballistic nuclear submarine. re The Hantz, design is based on the Russian Ocula one-class submarine. The outer hull and an inner pressurized housing make up the middle part of the submarine’s body, while two rectangular vents on the starboard side draw in water.

Apart from the K 15 SLBMs that can be launched even under ice caps, when the submarine submerges into the sea, it will be capable of carrying all sorts of missiles and will have underwater ballistic missile launch capability. The submarine will be armed with the Best anti-ship and Best anti-land cruise missiles as well as torpedoes.

The Virginia class is a multimission stealth nuclear-powered submarine designed for anti-submarine warfare and littoral missions in the deep ocean. The control suite is equipped with computer touchscreens and the submarine is outfitted with modular separated deck constructions. Virginia has a decreased acoustic signature thanks to freshly developed anechoic coatings, isolated deck structures, and a redesigned propulsor design. Virginia has 12 vertical missile launch tubes and 533-millimeter torpedo tubes.

In a single salvo, the vertical launching system can launch 16 Tomahawk submarine-launched cruise missiles. Up to 26 Mark 48 and Cap Mod 6 heavyweight torpedo and sub harpoon, anti-ship missiles can be launched from the 21-inch torpedo tubes. It could possibly be armed with captor mines of the Mark 60 variety.

The astute-class is a British nuclear-powered attack submarine that replaced the five Swift Sir class submarines. The submarine is powered by the latest Rolls-Royce pressurized water reactor design, the core h, which eliminates the need for refueling. This means that the submarine’s nuclear reactor only needs to be refit once instead of every few years.

The Astute-class submarines have six 21-inch torpedo tubes that can fire Spearfish heavyweight torpedoes, and they also deploy Raytheon Tomahawk cruise missiles for land strike missions. Up to 38 weapons can be stored in the astute class.

The nuclear ballistic missile submarine serves the French Navy and is part of the French Navy’s nuclear deterrent strike force. It has a submerged displacement of 14,000 335 tons and is now the sixth-largest submarine in the world. The first two-class submarine was launched in July 1993 and entered service in 1997. It was developed and built at the DCN Cherbourg shipyard.

The nuclear-powered ballistic missile submarine Vanguard is in service with the Royal Navy of the United Kingdom. It has a submerged displacement of 15,900 tons, making it the world’s sixth-largest submarine. The main nuclear-powered propulsion system of this submarine is based on a second-generation Rolls-Royce power plant that was developed exclusively for this class. Submarines of today’s generation can circle the globe.

20 times around the world, although recent technological advancements would allow for a 40-time circumnavigation without refueling. The vanguard is equipped with four 533mm torpedo tubes, as well as advanced tactical weapons systems such as the tiger fish and spearfish. The vanguard can carry 16 Trident missiles.

the 885 Yasen project The latest Russian nuclear-powered assault submarine is the Western designation grain at class. A single hole constructed of low magnetic steel lowers the magnetic signature, and the fantastic class is powered by a KPM-type pressurized water reactor and a steam turbine.

The submarines of the Yasen class have a maximum submerged speed of 35 knots and a surface speed of 20 knots. Submarine-launched cruise missiles are among the military systems aboard the submarine. anti-ship missiles with a great range and supersonic speed missiles anti-submarine mines, torpedoes, and anti-submarine rockets

The Sea Wolf class of nuclear-powered assault submarines was supposed to be faster and better armed than the Los Angeles class. sea The modular design of Wolf provides significant enhancements and advances.

It has more agility than the Los Angeles class space, allowing for future improvements and weapon advancements as well as improved sonars. There are no external armaments on the Sea Wolf. This submarine is equipped with Raytheon’s Tomahawk missiles, which are available in land-attack and anti-ship versions. The Boeing harpoon anti-ship missile is also carried by the Sea Wolf class. The harpoon uses active radar homing to deliver a 225-kilogram warhead with a range of 130 kilometers and a high subsonic speed.

The Ohio-class submarines functioned as practically undetected undersea launch platforms for intercontinental missiles for the US Navy. The guided-missile submarines of this class provide the Navy with unrivaled strike and special operations mission capabilities from a stealthy clandestine platform armed with tactical missiles and outfitted with superior communications. SSG NS are capable of directly serving the strike and special operations force requirements of combatant commanders.

The borei-class, also known as Project 955 in the West, is a fourth-generation nuclear-powered missile submarine that will replace older Russian Delta 3 Delta 4 and typhoon-class ballistic missile submarines as part of Russia’s naval deterrence. The Borei-class submarines are the first in Russia to use the pump jet propulsion system, making them less detectable to sonar than their predecessors.

This submarine also carries six SS n 15 anti-ship missiles, each of which is a 533 millimeters caliber anti-ship missile with a range of 45 kilometers and can be fitted with a 20 kilotons warhead for a type 40 torpedo. The Bulova designated RSM 56 in the START Treaty, which is based on the TOEFL and design is being fitted onto the Borei-class submarines.

Top 10 Electric Trucks in the World