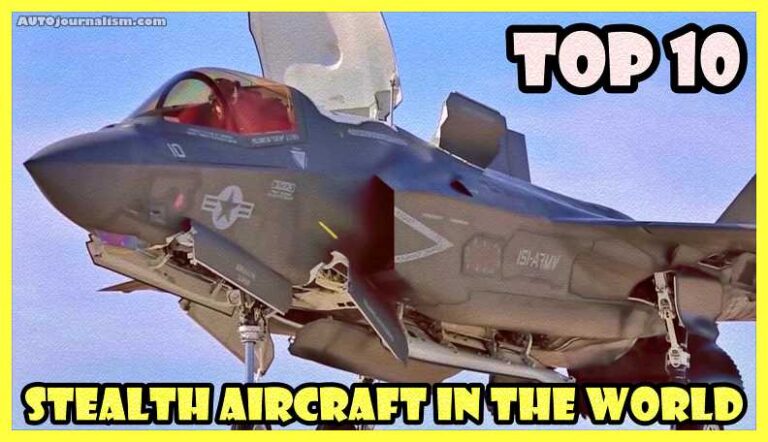 Top 10 Stealth Aircraft in the World

Stealth technology is still in its infancy, and many countries are working on stealth fighters as advanced fifth- or sixth-generation jets. Only the United States and Israel have used stealth fighter jets in battle so far.

Since the invasion of Panama in 1989, the US has had and deployed stealth fighters. They’ve served in the Gulf War, Kosovo as part of NATO’s engagement in the Yugoslav wars, the Afghan War, and the Iraq War since then. During the Libyan Civil War, stealth bombers were utilized.

This stealth aircraft is currently being developed by Mikoyan and is another example of a stealth fighter that is still in the planning stages. It’s expected to be a fifth-plus-generation or sixth-generation fighter jet when it’s finished. It is expected to have stealth capabilities in any case.

These would replace Russia’s venerable but aging fleet of MiG-31 fighter jets, which haven’t been manufactured since 1994. The MiG-41’s design was finished in 2019, and more research was undertaken throughout 2020 until the stealth jet fighter was confirmed to be in the development phase in January 2021.

The fighter’s production is set to begin in 2025, yet very little information has been released. According to early reports, the stealth jet fighter will be able to reach Mach 4.9 once completed.

This ongoing Japanese stealth fighter project is still in its infancy, with a manufacturing timeline set for July 2020. A prototype is expected in 2024, followed by inaugural flight testing in 2028 and, if everything goes well, widespread production in 2031.

Around 90 Mitsubishi Heavy Industries F-2 jet fighters will be retired in the mid-2030s, and the Mitsubishi F-X will replace them. Although the information is undoubtedly preliminary and limited given that the fighter is still in the development phases, it is expected to have stealth technologies.

The F-X, dubbed Godzilla, has yet to receive formal specifications, but it is expected to eventually have X-2 capabilities and be able to carry more missiles than the F-35.

This first mission proved the b1 B’s conventional duty and its ability to operate in a forest package by penetrating Iraqi air defenses to strike Republican Guard facilities. Due to layout solutions, the bomber has a smaller radar cross-section. Engine nacelle design changes, radar-absorbent coatings are used, and fan shields are changed, among other things.

The Lockheed f-117 nighthawk is a single-seat twin-engine stealth attack aircraft created by Lockheed Secret of Skunkworks and flown by the US Air Force. The Nighthawk was the first operational aircraft to be constructed around stealth technology. It made its first flight in 1981 at Groom Lake, Nevada, and attained initial operational capability status in 1983.

The Nighthawk was kept under wraps until 1988 when it was revealed to the public. The f-117’s reduced visibility was primarily achieved thanks to the angular shape of the hull, which was built on the concept of reflector planes. Composite and radar-absorbing materials, as well as a special coating, were also used.

The j-20 z’s nose and canopy use a similar stealth shaping design as the f-22, resulting in similar signature performance in a mature design in the front, although the aircraft’s side and axis-symmetric engine nozzles may expose the aircraft to radar, according to analysts.
The aircraft entered service in March 2017 and commenced combat training in September of the same year.

The J-20 was Chengdu Aircraft Corporation’s third stealth jet fighter for the Chinese Armed Forces, and the first that was not intended for the US Air Force. It’s possible that this isn’t coincidental: the Wall Street Journal reported in 2009 that the project was in jeopardy.

Despite the fact that a 2011 test coincided with Defense Secretary Gates’ visit to China, Chinese President Hu maintained it was just accidental. Nonetheless, the J-20’s resemblance to the F-35 has been interpreted as a potential challenge to American air superiority, with political and military ramifications reminiscent of the Cold War.

The Shen yang j-31 is a copy of the American f-35 Lightning fighter jet. Its goal is to become a less perfect, but similar-looking, and much cheaper f-35 Klump for sale in 2020 in countries that will be unable to purchase American planes due to financial or political constraints.

The F-35 Lightning II is a fifth-generation fighter that combines enhanced stealth with fighter speed and agility, as well as sensor-enabled operations and advanced sustainment. The Lightning 2 is a single-seat, single-engine fighter aircraft equipped with advanced integrated sensors. It is intended to do tasks that were previously performed by a small number of specialized aircraft.

Intelligence, surveillance, reconnaissance, and electronic assault tasks can now be carried out by a squadron of F-35s, giving many Allied troops additional capabilities. The US plans to buy 2663 F-35s, which will provide the bulk of the US Air Force Navy and Marine Corps’ crewed tactical airpower in the future decades. The F-35 will be delivered to the US military until 2037, with a planned service life of up to 2017.

This sophisticated stealth fighter jet is the next in Lockheed Martin’s F-series and is produced for the United States Air Force, Navy, and Marine Corps, as well as the Royal Air Force.

As of January 2021, about 610 F-35s had been constructed. It makes use of Radar Absorbent Materials (RAM) to reduce the Radar Cross Section (RSC) and so become more stealthy. Serrated and radar-absorbent fiber mat skin, angles that diminish radar and visible signals, and Luneberg lenses for increased stealth are just a few of the stealth-enhancing design characteristics.

Sukhoi Su-15 is a stealth single-seat twin-engine fifth-generation multi-role jet fighter designed by Sukhoi in 2002 for air superiority and assault operations. The fighter is designed to outperform previous generation fighter aircraft, as well as ground and naval defenses, by combining supercruise, supermaneuverability, stealth, and modern avionics. The majority of the SU 57’s characteristics are still unknown.

The aircraft canopy is made of composite material and 70 to 90-nanometer thick metal oxide layers with enhanced radar wave absorbing to minimize the radar return of the cockpit by 30 percent and to protect the pilot from the impact of ultraviolet and thermal radiation, according to the available information.

The Northrop Grumman b-2 stealth bomber Aircraft is an important part of the US Air Force’s long-range strike capability and one of the most survivable aircraft in the world.

Its one-of-a-kind skills, such as stealth, enable it to breach even the most sophisticated enemy defenses and put high-value, heavily guarded targets at danger.

The B2 is the only US aircraft that combines long-range heavy payload and stealth technologies in a single platform, allowing it to project airpower anywhere on the planet. It can fly 6,000 nautical miles without refueling and ten thousand nautical miles with only one aerial refueling. Currently, nineteen BTS are stationed at Whiteman Air Force Base in Missouri, which is home to the 590 m wing.

The F-22 Raptor is a stealth tactical fighter aircraft built by Lockheed Martin for the United States Air Force. It’s a single-seat twin-engine all-weather stealth fighter aircraft from the fifth generation. According to experts from a variety of countries, its unique combination of stealth, agility, and situational awareness, as well as devastating long-range air-to-air and air-to-ground weaponry, makes it the world’s greatest air dominance fighter.

The F-22 is the most sophisticated fifth-generation stealth fighter, with no real competition from fourth-generation fighters. Because the technologies and materials used in its manufacture are still classified as secret and strategic, the US Congress prohibited the sale of the F-22 to other countries.

Lockheed Martin produced the F-22 for the US Air Force, and it entered service in 2005. No other aircraft, according to the Air Force, could match it at the time. In 2007, two F-22 Raptors were dispatched from Elmendorf Air Force Base to intercept Russian Bear-H Bombers.

So, this is the list of Top 10 Stealth Aircraft in the World, Thank you for taking the time to read this post; please share it with your friends and bookmark this page because we provide quality content on a daily basis.