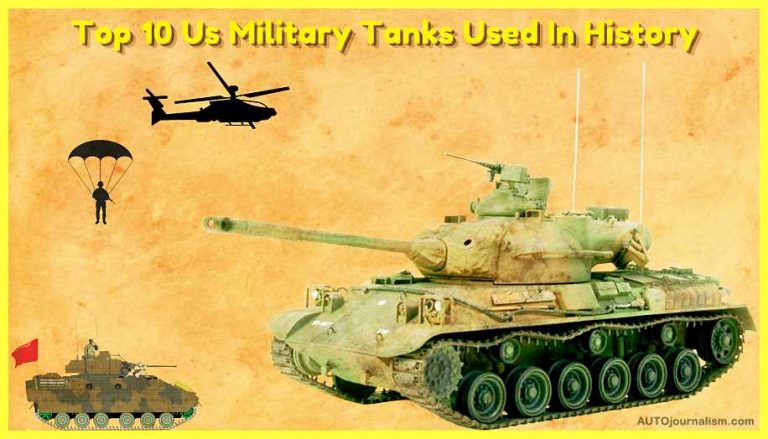 Here is the list of Top 10 Us Military Tanks Used In History, Since the start of world war I, when tanks were first produced, the United States has continued to produce them. Many older tanks have been produced in white numbers and have been exported to many nations worldwide. These tanks have been used in numerous conflicts worldwide and, of course, have proven their combat effectiveness, which is why they are still in use today. In this article, Autojournalism will list the top 10 American tanks that have engaged in the most combat throughout history.

The M5 Light TANK is listed as number ten. In 1942, an upgraded version of the M3, which was initially known as the M4 but later renamed the M5, was built with better engines. The hull of the M5 was altered, and the driver’s hatches were elevated. The T7 light tank project included a stronger cannon, volute suspension, and thicker armor. The T7 was originally designated as a “light tank,” but changes made during development resulted in it being reclassified as a “medium tank,” and it was approved for manufacture with a contract for 3,000.

The M7, on the other hand, was abandoned after just 7 were finished because the M4 was already in production. [22] From 1942 onward, the M5 gradually superseded the M3 in production, and in 1944, the Light Tank M24 took its place.

The M3 Light Tank, which replaced the M2 Light Tank, is item number nine. Due to American observers’ observations of how easily German Panzers destroyed French and British light tanks during the Battle of France, work on a new light tank based on the M2 series began in July 1940. The initial improvement was given a 37 mm cannon, heavier armor, and redesigned suspension and was known as the M3 Light Tank. Beginning in March 1941 and running until October 1943, 25,000 M3 Stuarts, and later M5 Stuarts were constructed.

The M41 Walker Bulldog, which is ranked eighth, was exported by the US in huge numbers, particularly to Asia, and became the first post-war tank to be widely employed. However, the US military did not use it in combat.

In addition to these conflicts, it was also used in the Lebanese civil war, the Guatemalan civil war, the Somali civil war, and the 2006 coup d’etat in Thailand. It engaged T-34s at the Bay of Pigs and was employed for nearly nine and a half years by south Vietnam where it engaged Pt-76 and T-54 North Vietnamese tanks.

The well-known m1 abrams, an American main battle tank of the third generation, comes in at number seven. It was put into service in 1980. The militaries of Egypt Kuwait Saudi Arabia serve this USMBT’s export version. As the Abrams entered service, Australia and Iraq took part in various cold war exercises, which were typically held in western Europe, mainly West Germany, alongside the M60A3 and other NATO tanks.

The Persian Gulf War provided the first opportunity for the exercises, which were designed to counter Soviet forces. Since then, the Saudi Arabian army has used them in the Yemeni Civil War, the Wars in Afghanistan and Iraq, and the War Against ISIL. They were also used in 2003 when they took down Saddam Hussein in an invasion that lasted only 43 days.

It was also utilized in post-World War II conflicts including the Korean War. Number 6 the M24 Chaffee the small tank began to enter extensive use in December 1944. These saw battle mostly in northwestern Europe and the north german plane where British forces saw action against German troops.

The first American tanks used in this conflict were M24s, which were designed to take on the heavier and larger North Korean T-3485 tanks supplied by the Soviet Union. M24s were also used by the French in the Algerian War and the First Indochina War. They were supplied to numerous armies worldwide and were used in regional conflicts.

The M47 Patton is ranked number five on the list of the top eight American tanks that have engaged in the most combat throughout history. It was widely used by both NATO and Southeast Asian countries during the Cold War and was the only patent series tank to remain combat-free while serving in American service.

The M48 PATTON is ranked number four. The M48 PATTON series saw substantial deployment with the United States and NATO. The US military deployed nearly 600 of these tanks during the Vietnam War. The M4 Sherman tanks were utilized in both the 1965 Indo-Pak War and the subsequent war in 1971.

During the 1967 six-day battle, m48s were also employed to varying degrees of success. Iranian t-55, t-62, and t-72 tanks, as well as m60 patents, were used against them in the Iran-Iraq conflict from 1980 to 1988. The tanks were also deployed in the western Sahara desert against Polisario rebels.

The M3 Stuart, an American light tank, was first used in battle during the North African campaign, and around 170 of them were employed by the British forces during Operation Crusader in 1941. It is the third American tank to have seen the most combat in history. When Stuart tanks were used in the Philippines in December 1941 to combat the Japanese in the closing phases of World War II, they became the first American man tanks to engage the enemy in tank-to-tank combat.

The m3 was used for screening and reconnaissance operations outside of the Pacific War. It was also used in many other conflicts around the world, including the Chinese Civil War, the Indo-Pak War of 1947, the Korean War, the Cuban Revolution, and the Football War. The m4 Sherman was the most frequently used American tank in World War II.

The M4 Sherman, ranked at number two, initially engaged in combat at the Second Battle of El Alamein in October 1942 with the British Eighth Army. The Sherman led numerous Western Allies offensives following 1942.

The Sherman, particularly the numerous upgraded and improved versions, saw combat action after World War II in a number of conflicts across the globe, including those involving the UN forces in the Korean War, Israel in the Arab Israeli wars, South Vietnam for a brief period in the Vietnam War, and both sides in the Indo-Pakistani War of 1965. It was the most produced tank in American history with 49 324 made.

The M60, which is currently in the first place, became operationally capable when it was fielded by American army troops in Europe starting in December 1960. The m60 made its combat debut when Israel used it in the Yom Kippur War in 1973, using the secret name Mage 6. It performed brilliantly in the battle against the t-62 and other comparable tanks. The Israelis employed the m60 once more, but this time with upgrades, in the 1982 Lebanon war.

For example, explosive reactor armor to defend against guided missiles, which were incredibly effective in destroying tanks. The m-60 also served in the Iran-Iraq War. The United States’ greatest deployment of m-60s occurred in the 1991 Gulf War, where u.s. marines armed with m-60-a-1s successfully fought Iraqi armored forces, including t-72 tanks. The m-60 is deployed to Iran and also served in the Iran-Iraq War.