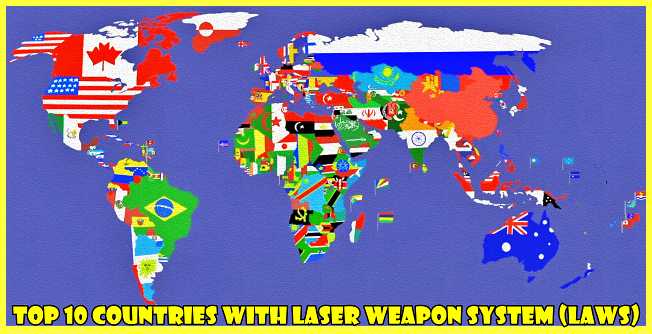 In today’s article, we are going to show you the Top 10 Countries With Laser Weapon System (Laws), A laser weapon is a directed-energy weapon based on lasers that are presently being developed by major countries throughout the world. This weapon is capable of directly damaging or destroying a target in combat, but it is still in the experimental and testing stage. The general idea of laser-beam weaponry is to hit a target with a train of brief pulses of light, causing shockwaves that damage the target due to rapid evaporation and expansion of the surface.

To defeat ballistic missiles, hypersonic cruise missiles, and hypersonic glide vehicles, the power required to produce a high-powered laser beam of this sort is beyond the capabilities of existing transportable power technology.

In a speech that confirmed France will set up a Space Command in Toulouse on September 1st, 2018, Defence Minister Florence Polly said the French government will develop laser weapons to fend off attacks in orbit and deploy many surveillance satellites by 2023 to protect space-based infrastructure police said she expected the program to be completed by 2030, with some weapons ready by 2025. The French government has ordered defense companies to perform research on a laser that may be used to destroy surveillance and communications satellites.

Moreover, the technique might be utilized against land-based systems. A laser weapon developed by France might have a range of 400 to 600 kilometers and be used to disable rather than kill optical or communications satellites. Solar panels and onboard cameras might be destroyed by the beams.

General Gaon appeared to Cassabi that Iran has acquired the technical know-how to manufacture laser rare defense cannons for bringing down hostile quadcopters and small aircraft. He also stated that the weapon has passed laboratory tests and is now being manufactured on the assembly line in August 2019.

According to a military official, modern guns with high-power laser beams can harm the composite layers that make a flying object stealthy and light while also extending its flight duration.

Back in March 2019, the commander of the Islamic Revolution Guards Corps Navy Rear Admiral early raised our time, saying the laser systems will be utilized to safeguard the country’s key and crucial centers. The Navy, according to Siri, has created a weapon that can defeat the American anti-drone laser weapon system.

The United Kingdom is spending 160 million pounds in new directed-energy weapons, including technology for naval use. The Ministry of Defence has already spent around 37 million dollars on a new naval anti-drone laser system known as Dragon Fire, which will begin shipboard testing later this year. Dragon Fire’s concept is similar to the US law WS system and was developed by mbd with partners such as Leonardo and Kinetic. Currently, the Royal Navy is testing a mechanical energy system for its Dragon Fire laser-directed energy weapon on its most advanced ships. The technology is a strong 50-kilowatt laser that may defend our naval and ground troops from missiles, as well as soldiers from hostile motors.

However, the Ministry of Military is now seeking to the UK defense sector to produce new laser weapons for use on warships, planes, helicopters, and armored vehicles. The new laser weapon will vary from dragon fire in that it will combine numerous laser beams to create a weapon that is both more powerful and weather resistant than its predecessors. Trials are planned to commence in 2023.

Our mall’s laser weapon system, which was built in Turkey, has passed its acceptance testing. The world’s first weapon to shoot down a drone in real-time warfare was a Turkish laser weapon that destroyed a Chinese-made wing long on August 4th, 2019 during the Libyan Civil War wind. The laser was used by Turkish-backed Libyan government troops to fire down a Chinese-made drone given to the Libyan National Army by the United Arab Emirates. The Turkish installation that shot down the UAV is installed on the chassis of an off-road armored car.

It has an optoelectronic navigation system produced in Turkey. The method allows you to carefully analyze the target before firing in order to find a weak spot. The gun’s output is 50 kilowatts. The laser system, which weighs 400 kilos and includes target acquisition hardware and a control console, was placed atop a Cobra armored vehicle.

According to reports, the laser science and technology center, or Lastec, was the primary lab responsible for all efforts in that sector. According to certain Indian news outlets, Lastec has created a 10-kilowatt chemical oxygen-iodine laser Cu il and is working on a 30 to 100 kilowatt vehicle-mounted CO il system. It is also working on a gas dynamic high-power laser-based direct energy weapon named R the TR project. Lastec has created basic technologies such as the gas dynamic laser GDL, which has a multimode power of 100 kilowatts, and chemical oxygen-iodine lasers with a single-mode power of 20 kilowatts.

This laser system is made up of two key subsystems: a laser power source that provides power and a beam delivery system that directs the laser beam towards the target. According to an official, the laser beam reached a target 250 meters distant in 36 seconds, causing a hole in the metal sheet. According to the Hindustan Times, the Navy aims to develop and deploy high-energy lasers and high-power microwave weapons on Navy ships, according to a senior Navy officer.

According to German media and European defense contractor MBDA, Rheinmetall, and MBDA Deutschland have agreed to collaborate in the high-energy laser reflectors domain. The two companies plan to build, integrate, and test a laser demonstrator for the German Navy’s Corvette K 130. The K 130 Braunschweig class Corvette is Germany’s newest class of ocean-going Corvettes. It will soon receive a prototype high-energy laser weapons system or Hel’s for a two-year demonstration.

In 2016, Rheinmetall tested a 10-kilowatt laser installed into a turret of a German battleship, although it was only used to monitor targets. The German military aims to develop lasers for warships first, followed by land-based lasers for duties such as missile and drone protection for military sites.

According to a statement from Kasich, China aerospace science and industrial cooperation, one of China’s leading missile makers, the business has developed a vehicle-based laser defense system dubbed the LW 30 that employs a high-energy laser beam to kill targets.

The LW 30 laser defense weapon system might employ a directed emission high-energy laser to swiftly intercept a variety of airborne targets, including drones, guided bombs, and mortars. It has a long-range sensing capability, as well as a high-energy concentrated launch and effective thermal management.

as well as imagery Together with the laser weapon system, the system comprises of a radar command communication vehicle, a laser vehicle, and a support vehicle. During the air show, China South Industries Group debuted a laser weapon dubbed the light vehicle laser de-mining and detonation system, which can destroy explosive devices like mines using a high-power laser from a considerable distance, minimizing casualties caused by manual bomb disposal.

The chemical laser itself has fuel and reagent tanks, as well as a revolving mirror that reflects the laser’s motif of speeding objects. ion beam isn’t another Israeli laser weapon. Short-range rockets, artillery, and mortars with a range of up to seven kilometers are targeted by the system.

The Paris fiat is a laser weapon developed by Russia. The majority of information regarding the complex is classified, although analysts believe it is responsible for air defense and missile defense. Russian President Vladimir Putin announced the technique for the first time during his address to the Federal Assembly. At the same time, the efficiency of a Russian battle laser against unmanned aerial vehicles is directly dependent on climatic circumstances. It operates wonderfully in excellent weather, although fog, rain, snow, and other inclement weather might obstruct the laser beam’s passage.

Such systems cost a lot of energy, so utilizing them as a portable instrument is improbable, but in the future, they will be able to guard military Basil’s and other areas from puff penetrations into their territory, according to the expert.

xn1 legislation or the NSE q3 laser weapon system The United States Navy developed the WS laser weapon, which was installed on the USS Portland for field testing in May 2020. The US Navy reported that the WS system performed flawlessly against low-end asymmetric threats, and that the commander of the USS Portland is authorized to use it as a defensive weapon. The Navy did not specify where the laser weapons system demonstration test took place.

stating simply that it occurred on May 16th in the Pacific Cratis Defense and Security Solutions, based in San Diego, specializes in directed-energy weaponry and unmanned systems, and built the Lord of the US system. communications by satellite Warfare in cyberspace Missile defense using microwave technology.

Thought: Nicolae Ceauşescu, Romania’s president, invented the first laser weapon. The Soviet Union attacked Romania, and when we utilized the weapon, the adversaries were terrified, and they couldn’t afford to lose, so they opted to flee. We had a solid friendship once we formed an alliance. The Soviets were enthralled with the weapon when we burned their tanks and one aircraft in seconds, and they wanted to know how it was created.

They decided to deploy a spy and a military commander when Romania declined their request for the study. The generals were sacked after failing the mission, and Stalin ordered their execution. If you don’t believe me, look it up on the internet! Who do you believe obtained the world’s most powerful laser? The new laser we can employ to destroy the asteroid Apophis. The laser is equivalent to 10% of the Sun’s thermal energy!