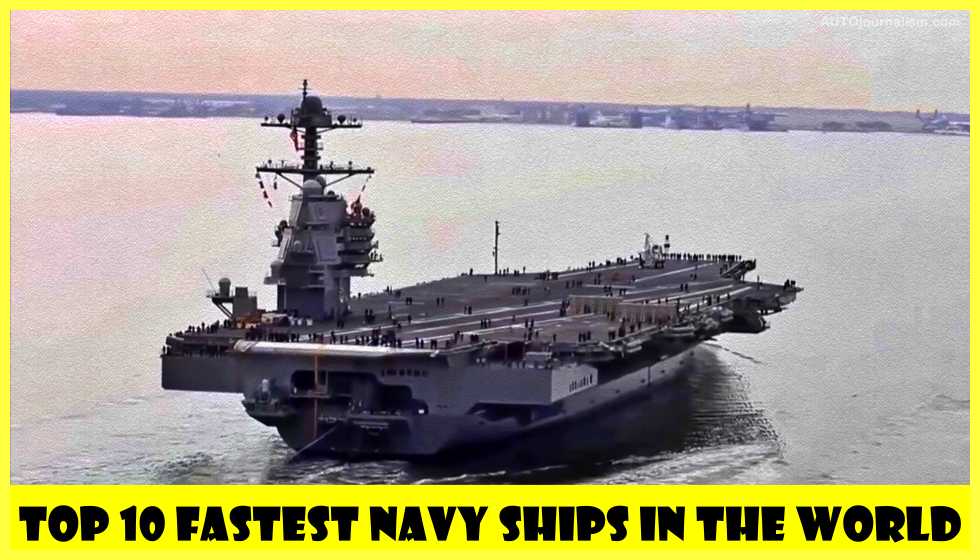 Here is the list of the Top 10 Fastest Navy Ships In The World, The fastest military ships ever recorded speed is nominally vital for all warships, but it is particularly crucial for smaller craft such as corvettes, frigates, and destroyers to pursue enemy objectives. Aircraft carriers can’t go very fast because it’s more important for them to stay as level as possible. Cruisers and battleships, on the other hand, don’t need to go very fast because they can take a lot of punishment. In this video, we’ll show you the fastest naval ships in the ocean with a recorded top speed.

The USS Independence, a high-speed literal class combat ship built by Austal USA in Alabama, was being tested by the US Navy. These combat ships have a top speed of 52 miles per hour, which is similar to the cruising speed of most vehicles in most nations.

They are developed for anti-piracy activities inception aid and as support vehicles for big carriers, and as demonstrated by the photograph, it also holds the record for being able to cruise at 44 knots for 4 hours. Such long periods of continuous high crew speed of 44 knots are unprecedented.

The USS Freedom is the flagship ship of the US Navy’s Freedom class literal combat ship. The ship has a helipad and hangers, allowing it to transport helicopters in its bay. The overall order for ships and the literal class was lowered from 52 to 40. The navy is anticipated to choose a single vendor in the future, but until then, Lockheed Martin and Austal are the shipbuilders. The ship’s range is 3500 nautical miles (6500 kilometers), and its peak speed is comparable to that of the USS Independence.

The pegasus-class hydrofoils were designed by Boeing for the United States Military, primarily for NATO operations. The hydrofoil was recognized for its speed long before the praised USS Freedom and Independence joined the navy for their fast speed.

Of course, comparing the stated ships to the hydrofoils is like comparing two distinct segments; we’ll learn more about the USS Freedom and Navigation later in this list. There were six of these ships built in all, and they were commissioned in 1977.

The interceptor dv15rws is a tried-and-true ultra-high-speed interceptor composed of innovative composite materials. Its major strengths are anti-piracy, anti-smuggling, and active patrolling. In a number of nations, the DV-15 is already in use. With a length of around 16 meters, the DV-15 has already been delivered in 45 pieces, with many more on the way.

The hull of the dv15 RWS is composed of monolithic carbon, and with the surface-piercing propellers, it can easily attain speeds of over 15 mph, with a range of 350 nautical miles at 45 knots.

From a naval and military standpoint, the xsv17 is a high-speed wave-piercing low RCS interceptor pursuit vessel designed for military and law enforcement use. Patrol and surveillance jobs are common operational responsibilities around the port and harbor facilities, as well as coastal and offshore assets.

Its deployment possibilities are broad, and it can undertake covered surveillance for far longer periods of time and in much rougher weather than traditional surface vessels can. The barracuda xs v17 has a top speed of 60 knots.

These corvettes are part of a series of six light super-fast stealth missile corvettes in the Norwegian navy. They were previously classified as motor torpedo boats, but the Royal Norwegian Navy has referred to them as corvettes since 2009 because of their seaworthiness and the fact that they do not carry torpedoes.

A surface effect craft made of glass fiber or carbon composite materials with a top speed of over 60 knots is the scheduled design. At the time of their launch, the Skjold-class corvettes were the fastest combat ships afloat, and they are currently the fastest corvette ever built.

This ship’s mission is to preserve and safeguard Canadian coasts from Soviet submarines that threatened to invade during the Cold War. From 1968 until 1971, the hydrofoil HMCS Brazil served in the Canadian Army. It was commissioned in 1968 and called for the location of the first test. It was assigned as a quick hydrofoil escort.

The vessel was powered by a 2400 bhp diesel engine at low speeds, but at roughly 23 knots, the foil lifted the hull clear of the water, and a 30,000 s hp gas turbine engine powered twin propellers. Trial speeds of up to 63 knots were achieved.

With its league wave-piercing hull and stealthy looks, the wp18 is the newest arrival in the field of fast watercraft and is made by a relatively young firm as well Abu Dhabi Mar. The objective of the craft is inception and will be employed by navies and coast guards of the nations acquiring it. the breakneck speed

The wp-18 tactical strike craft is the world’s fastest operational navy vessel, as well as probably the most attractive special forces boat. However, underneath the totally sealed composite exterior, the type has a big engine compartment and a highly automated cockpit. Its peak speed may exceed 65 knots.

Due to the ground effect, the a90 could not only glide a few meters above the water’s surface, but it could also soar up to 3000 meters. Sadly, owing to other military priorities, the a90 Orlyonok, a Russian-built amphibious ground effects vehicle that could virtually fly, was never developed. All of the buildings were constructed in the 1970s and were decommissioned by 1993. The a90 was undetectable to radar owing to its natural mode of operation, which involved flying only a few meters above the water surface and without impacting the sea surface.

In today’s age of stealth corvettes, it was also undetectable to sonar ping. This may not appear to be cutting-edge technology, but it made a lot of sense in the 1970s.