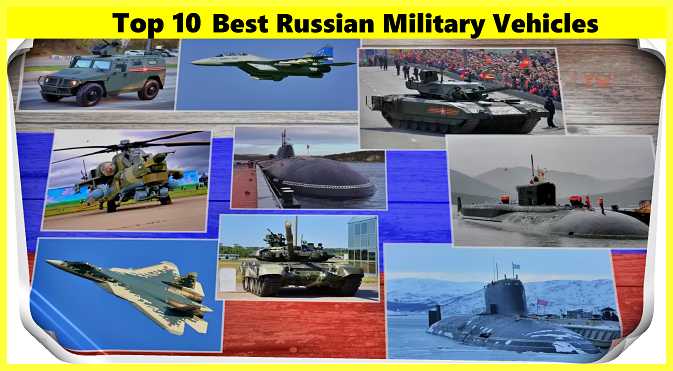 Here is the list of Russian military vehicles, TOP 10 Best Russian Military Vehicles, If you’re inquisitive, stay away from flights and stay tuned. Ships, tanks, trucks, and other potentially deadly military vehicles Russia has established itself as one of the world’s leading defense industries, a legacy that dates back to the Soviet Union’s political rivalry with the United States during the Cold War era, which allowed the country to produce a wide range of cutting-edge military equipment and pursue rapid technological advancement to outnumber its competitors, despite the fact that many European countries also developed tough and frightening vehicles. Russia’s will to continue developing its machines is undeniable.

The Gaz 2975, often known as the Tiger in English, is a Russian multifunctional all-terrain infantry mobility vehicle that was initially delivered to the Russian army in 2006. principally used by the military forces of the Russian Federation The tiger was built by LLC, a military-industrial business, and it comes with a strong diesel turbocharged air-cooled engine and a 5-speed manual gearbox. A 5.9 liter turbocharged Cummins air-cooled diesel engine with 180 horsepower was utilized to power the tiger.

The vehicle, like most powerful vehicles of its size, moves slowly, with a peak speed of just 87 mph on the road and 50 mph off-road. Looking at its primary armament, the gas 2975 tiger is equipped with a millimeter pkp pecheneg machine gun.

According to NATO, the Havoc Mi28 is a Russian all-weather day and night two-seat anti-armor attack helicopter with a military tandem. It’s an attack helicopter with no secondary transport capability and is better suited to the job than the mill Mi24 gunship. External loads are carried on pylons beneath stub wings, as well as a single cannon in an under-nosed barbette.

The mill mi-28 was built after the mill mi-24 was completed, and the design of mil-mi 28 was intended for a reduced transport capability and eliminates the cabin to allow for better overall performance and higher maximum speed. It first flew in November 1982, but it wasn’t officially introduced until October 2009.

According to a Russian military industry source, the Mikoyan MiG-35, also known as the Fulcrum F by its NATO designation Mikoyan MiG-35, is a Russian multi-role combat aircraft designed by Mikoyan, a branch of the united aircraft corporation UAC. Mccoy and the Mikoyan MiG-35 are basically enhanced versions of the MIG-29kr. In 2007, the Mikoyan MiG-35 was first shown to the rest of the world at the Aero India air show. However, as compared to early MIG-29 versions, the first two serial manufacturers of the aircraft will not reach service until 2019, more than a decade later.

The fighter’s avionics and missile systems have been greatly enhanced, including new precision-guided targeting capabilities and a specially built optical locator system that frees the aircraft from ground-based interception systems and allows it to execute autonomous multi-role missions. Russian aerospace forces are the major users of the MiG-35.

Sukhoi Su-57 is a single-seat twin-engine stealth multi-role fighter aircraft manufactured by the Russian aviation company Sukhoi. The Su-57 is the first stealth fighter in the Russian military’s arsenal. Originally designed to replace the MIG-29 and SU-27 in the Russian military’s aviation weapons, the Su-57 set the foundation for stealth combat aircraft that would survive in contemporary warfare. The Su-57 is known for being a formidable fighter in aerial, sea, and ground warfare.

The first Su-57 aircraft entered service with the Russian aerospace forces in December 2020, and it was predicted to have a service life of up to 35 years due to the design’s extraordinary maneuverability, stealth integrated avionics, and significant internal cargo capacity.

T-14 Armata, a Russian next-generation main battle tank, was based on the armada universal combat platform, the first series-produced next-generation tank. T-14 Armata was first publicly displayed during rehearsals for the 2015 Moscow Victory Day Parade, but one of the tanks suddenly stopped moving during the rehearsals.

After roughly 15 minutes, it moved away from its own power. The armada was reportedly built over a five-year period and incorporates various novel elements like AS an unmanned turret, three crew members positioned in the front of the hull, and armored capsules.

It is powered by a CHTt z12 in 360 diesel engine that produces up to 1500 horsepower and has a maximum power of 2 000 horsepower that is not routinely used. The armada’s engine is electronically regulated and has a range of up to 500 kilometers.

In 1993, he joined the military. The t90 is a third-generation Russian main battle tank that is a modern variant of the t-72b and has many of the same features as the t-80u. It was originally known as the t-72bu but was later renamed the t90. It has a 125mm 2a46 smoothbore main gun, the 1a45t fire control system, an upgraded engine, and a thermal sight for the gunner.

T90 was created and constructed in Disney Tagil, Russia by a Russian machine construction firm. During the 2020 Nagorno-Karabakh conflict, it was reported that Azerbaijan utilized T-90s tanks, although one was destroyed and seized by Armenian troops. Today, it is an advanced tank in service with Russian land forces and naval infantry.

The Soviets designed and developed it at first. The slava class cruiser was commissioned in 1983 after being launched in 1979. The concept, based on the p 500 basalt missile, began in the 1960s as a less expensive conventionally powered alternative to the nuclear-powered Kirov class battlecruisers. The slava class is a guided-missile cruiser that is heavily armed and equipped with anti-ship missiles, anti-submarine torpedoes, and signal jammers, making it an incredible and ideal attack vehicle.

The Akula class submarines, officially known as Project 971 shakshuka b by soviet designation and referred to as Akula by NATO, are a series of nuclear-powered attack submarines that were originally deployed by the Soviet navy in 1986.
Regardless of modifications, the submarine shakshuka b Akula is armed with four 533 millimeter torpedo tubes that can fire type 53 torpedoes or rpk2 or rpk6 missiles and four 650 millimeters

the rpk missiles or type 65 torpedoes Not only that, but the submarine has a twin hole system with an inner pressure hole and an outward light hole, which allows for more flexibility in the design of the hull’s external shape, resulting in a submarine with higher reserve buoyancy. The updated variants, such as the vepr, are expected to be fitted with caliber cruise missiles.

The Dolgoruki Boreii class submarines, often known as the Typhoon class, are a series of nuclear-powered ballistic missile submarines built for the Russian navy by Seymour. Submarines of the Borei class are notable for being substantially smaller in terms of capacity and crew. The design work on the Borei class project began in the mid-1980s, and the first vessel was built in 1996. The first submarine of the class, Yuri Dolgoruki, was set to launch in 2002.

However, due to funding concerns, it was postponed. The Borei class submarines are approximately 170 meters long, 13 meters in diameter, and have a top speed of at least 46 kilometers per hour. In addition, the Borei class was reported to be capable of carrying 12 missiles on the 15th of April 2007 in a ceremony attended by much industrial personnel and senior military officers.

Project 885 has been given a Russian designation. The Yassin class, also known by their NATO reporting name Severo, is a class of nuclear-powered cruise missile submarines designed by the Malakit Marine Engine Bureau and built by Samish for the Russian Navy. The Yasen class is based on the Akula and alpha classes and is expected to replace the current Soviet-era nuclear attack submarines. The project began on December 21, 1993, and was scheduled to be completed in 1998. According to certain accounts, the Yasen design is cutting-edge in terms of weapons.

Land attack cruise missiles, anti-ship missiles, and anti-submarine missiles are thought to be on board the gas and class. Yes, and class are apparently becoming the first to be equipped with a fourth-generation nuclear reactor. The reactor, which was developed by afrikantov okbm, is expected to have a core life of 25 to 30 years and will not require refueling.