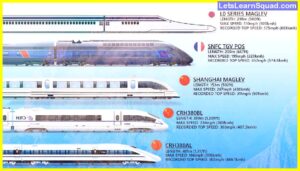 France holds the world record for a traditional wheeled passenger train, which is set in 2007 on a 140-kilometer stretch of track, while Japan holds the record for magnetic levitation trains. China dominates and has the fastest passenger trains. Top 10 Fastest trains in the world.

According to statistics, France and Japan are currently in second and third position, respectively. In today’s article, we’ll show you images of the fastest train speed ever reported, regardless of whether it’s carrying passengers, a prototype, or a field test, so let’s get started.

Here is the list of Top 10 Fastest trains in the world:

At number ten, we have a French high-speed tgv train that was withdrawn last year. The trainsets were semi-permanently coupled and consisted of two power cars and eight passenger carriages, with a maximum speed of 380 kilometers per hour.

The ERT 1000, ranked ninth, is a high-speed train operated by Italian state railway operator Italia. It was built between 2013 and 2017 and has a total passenger capacity of 457. During trials in 2016, the train reached speeds of over 390 kilometers per hour.

At number eight is SIEMENS VELARO –  SIMENS VELARO is a family of high-speed electric multiple unit trains built by Siemens and used in Germany Belgium France the united kingdom the Netherlands Spain china Russia and turkey in 2006 it broke the record of the Best and fastest unmodified Best in Class ac train set in the world over 403 kilometers per hour.

The TGV Atlantic is a class of high-speed trains used by SNFC in France, and they were designed by Alstom between 1988 and 1992. They were the second generation of TGV trains, following the TGV southeast in 1989. The TGV Atlantic reached a maximum speed of 482 kilometers per hour.

On April 3, 2007, a train using both TGV pos power cars set a new world speed record for traditional rail travel. The train hit 574.8 kilometers per hour, and on February 13, 2007, it set an unofficial speed record of 554.3 kilometers per hour as part of a sequence of increasingly faster runs that resulted in the official record attempt.