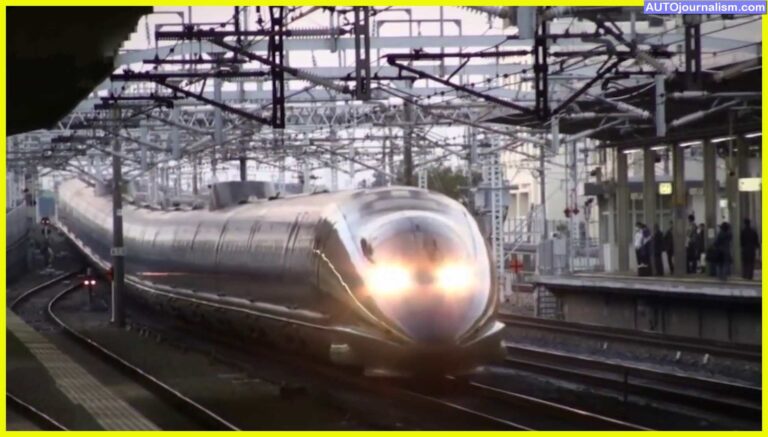 What is the top speed of the train? In 2015, a Japanese maglev train, the L0 Series, set an absolute railway speed record of 375 mph (602 km/h). In reality, there are perhaps five super-fast trains that run at above 200 miles per hour. We’ve compiled a list of the world’s fastest trains for this comparison. You’ll learn about the world’s fastest trains, their top speeds, which nations they operate in, who their maker is, and a lot more.

The 10 fastest trains in the world are amazing high-speed trains that run on railway lines in countries all over the world, reaching speeds of over 180 miles per hour.

It is a Japanese train that has been in production since 1995. It is made up of eight carriages and can transport a total of 600 passengers. There is also another type with 16 cars and a top speed of 198 miles per hour. Due to its high manufacturing cost, only a few units have been produced, and only a few are currently in service on Japan’s rail lines.

It’s a double-decker train that dates back to 1995 and was built in France. It is 656 feet long and contains ten passenger waggons. It travels at a speed of 198 miles per hour and has been constructed in over 60 units. It now runs on railway lines in many nations, travelling from Paris to Luxembourg or Munich.

It is a Japanese train that was built in 2011. It can travel at a top speed of 198 miles per hour and has an aerodynamic design that reduces vibrations and noise. It measures 820 feet long and has ten waggons with a total capacity of 731 passengers. More than 50 units have been built and are currently in service on various railway lines in Japan, circulating in cities such as Tokyo.

It’s a 2006 distributed traction train made in Germany. It is 656 feet long and has eight waggons with a total capacity of 404 passengers. It is supposed to travel at a speed of 217 kilometres per hour and includes several amenities like as television screens and an internet connection. This train currently travels through various railway lines in Spain and takes 2.5 hours to travel from Madrid to Barcelona.

It is a distributed traction train that was created in 2008 by a French business. It is meant to attain a maximum speed of 224 miles per hour and can carry up to 14 waggons with a total of 650 people. At the moment, it circulates via rails in various parts of Italy at a limited speed of 186 miles per hour.

It’s a brand-new generation of Italian train that debuted in 2012. It features eight carriages with a total capacity of 450 passengers, is 656 feet in length, weighs 500 tonnes, and is capable of reaching a top speed of 248 miles per hour. More than 50 units have been produced and are currently in use on various Italian railway lines.

It’s a distributed traction train that was built in 2011 in South Korea. It is 630 feet long and has six waggons that can transport 450 passengers. It was built to minimise travel time between cities and has a top speed of 251 miles per hour. It now runs on South Korean railway lines and takes 90 minutes to travel from Seoul to Busan.

It is a red dolphin-themed Chinese train that began service in 2016. It is 685 feet long and contains eight carriages with seating for 550 passengers. Its top speed is 217 miles per hour, but it was planned to go faster. This train now runs on the country’s principal railway lines, taking less than five hours to go from Beijing to Shanghai.

It is a magnetic levitation train made in Germany that first ran in China in 2002, proving that it was much faster and quieter than other trains at the time. It currently runs on an 18-mile railway line between Shanghai Airport and Pudong, taking only eight minutes to complete and reaching a top speed of 267 miles per hour.

It is a Japanese magnetic levitation train that aims to travel at speeds of over 310 miles per hour on tokyo railway lines. It uses a magnetic system that allows it to levitate 4 inches high and avoid friction. In 2015, this train achieved a speed of 374 miles per hour on the yamanashi test track, and it currently holds the world record for the fastest train in the world.