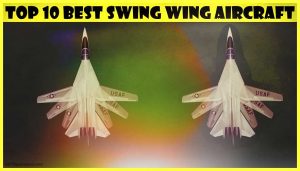 Here is the list of Top 10 Best Swing Wing Aircraft, The swing wing was the preferred design for strategic bombing and attack aircraft in the 1960s and 1970s when the future of enhanced high-speed flight included the ‘Swing-Wing’ potential to further streamline aircraft. The phrase “swing-wing” refers to an airplane wing or set of wings that may be swept back and then straightened out during flight. It is an example of a variable-geometry aircraft since it allows the form of the aircraft to be changed while in flight. Today, we’ll look at 10 of the Most Amazing Swing-Wing Aircraft Ever Constructed. Let’s have a look!

The X-5 was an experimental single-seat, single-engine, jet-powered fighter design prototype produced by the Bell Aircraft company and became the first aircraft to make use of in-flight variable geometry wings. Its roots originated in the German Messerschmitt Me P.1101 from which the X-5 borrowed heavily in terms of the overall design. Only two X-5 prototypes were ever produced with the second being lost to accident. The X-5 program was being considered for an American/NATO low-cost tactical fighter initiative. The two aircraft made their first flights on 20 June and 10 December 1951. Almost 200 flights were made at speeds up to Mach 0.9 and altitudes of 40,000 ft. One aircraft was lost on 14 October 1953, when it failed to recover from a spin at 60° sweepback. Air Force Captain Ray Popson died in the crash at Edwards Air Force Base. The other X-5 remained at Edwards and continued active testing until 1955, and remained in service as a chase plane until 1958.

The Aardvark was the first variable-sweep aircraft to enter production, and the wings could sweep from 16 degrees to 72.5 degrees. But a swing-wing wasn’t the only pioneering technology on this jet. It also paved the way for terrain-following radar, making it capable of high-speed, low-level flight. The F-111 Aardvark swing-wing bomber was introduced in 1967 and retired in 1996 from active service with the United States Air Force followed shortly by its counterpart the EF-111 Raven.

The Mikoyan-Gurevich MiG-23 Flogger was the first Soviet aircraft to feature variable sweep wings and paved the way for the equally successful MiG-27 Flogger ground strike variant. Also, it was the Soviet Union’s first jet equipped with look-down or shoot-down radar, as well as the first to have side-mounted air intakes. The MiG-23 was first officially commissioned into the Soviet Air Forces on 4 January 1974 and it was retired in 1998.

The Tornado is one of the most recognizable swing-wing aircraft. The Tornado has another rare feature of fighter aircraft which is thrust reversers. The reversers were put on to increase STOL capability. The Tornado is also a family of twin-engine, variable-sweep wing multirole combat aircraft, jointly developed and manufactured by Italy, the United Kingdom, and West Germany. The Panavia Tornado was developed and built by Panavia Aircraft GmbH, a tri-national consortium consisting of British Aerospace, MBB of West Germany, and Aeritalia of Italy. It first flew on 14 August 1974 and was introduced into service in 1979–1980.

The Sukhoi Su-24 “Fencer” was the Soviet answer to the American General Dynamics F-111 Aardvark. The Soviet design was no doubt inspired by the impressive and powerful “swing-wing” American design and attempted to follow suit with an equally capable mount worthy of her Soviet airmen. After some 35+ years of active service, the end is near for the impressive Fencer, gradually outdated in many facets of her makeup. In all, approximately 1,400 Su-24s have been produced by Sukhoi OKB in three distinct operational variants and delivered to a handful of foreign operators.

It’s the only active swing-wing aircraft in the US Air Force, and it packs a punch. This Mach 1.25 bomber can carry 125,000 pounds of payload. And with over 120,000 pounds of thrust, it can get places quickly. The B-1 was first used in combat in support of operations in Iraq during Operation Desert Fox in December 1998, employing unguided GP weapons. B-1s have been subsequently used in Operation Allied Force (Kosovo) and, most notably, in Operation Enduring Freedom in Afghanistan and the 2003 invasion of Iraq.

Since its inception, the Tupolev-produced by Tu-160 has been the largest jet-powered, swing-wing combat aircraft platform ever produced, mounting the most powerful jet engines fitted to any military aircraft. Developed as a direct counter-product to the United States Air Force’s Rockwell B-1 “Lancer” strategic bomber, the Tu-160 was designed to fulfill the slightly different role of stand-off missile launching. In contrast, the B-1 served primarily to deliver large amounts of precision munitions in the form of cruise missiles and other potent air-to-surface types. In April 1987, the Tu-160 entered operational service with the 184th Guards Heavy Bomber Regiment located at Pryluky Air Base, Ukrainian SSR.

The Tupolev Tu-22M Backfire is a supersonic, swing-wing development related to the original 1960s-era Tu-22 Blinder Medium Bomber. It is a dedicated strategic bombing and maritime strike platform primarily serving Soviet interests (both during the Cold War and even today). The Tu-22M represented a further evolution of the original Tu-22 “Blinder” which failed to impress along many lines. However, the Tu-22M incorporated enough major changes that it could be considered an “all-new” bomber aircraft and brought about improved use of missile armament and supersonic flight as well as introducing variable geometry wings.

The Mach 2-capable Sukhoi Su-17 “Fitter” was a further development of the successful Su-7 “Fitter-A” fighter-bomber family line detailed elsewhere on this site. The aircraft incorporated a partial variable geometry wing (“swing-wing”) system and improved upon the former’s take-off and landing attributes as well as the performance at the low level as required of it during ground attack runs. The Su-17 was developed into the export Su-20 and Su-22 Fitter models of varying avionics, engines, and weapons. In all, some 2,867 Su-17/Su-20/Su-22 Fitters were produced with almost half of these made available to Soviet export customers. Also over a dozen nations took delivery of the type, making it a staple fighter-bomber throughout the Cold War. And

It becomes one of the most impressive Navy aircraft to ever fly, the F-14 could reach speeds of Mach 2.34, had over 54,000 pounds of thrust, and starred in the best aviation movie ever made. The F-14 was designed from the outset as a carrier-based fighter, unlike the F-111B which was born from a land-based fighter-bomber airframe. The F-14 however, retains many of the qualities and components inherent in the F-111B such as the “swing-wing”, variable geometry wing assemblies, radar system with long-range missile support, two-man crew, and twin-engine layout. Total F-14 production by Grumman yielded 712 aircraft and these were manufactured from the period of 1969 to 1991. Non-combat attrition proved relatively high for the series in that some 160 were lost in accidents alone. Many preserved F-14 Tomcats are showcased at outdoor and indoor displays across the United States today.